My Little Pony Friendship is Magic Wiki
Register
Don't have an account?
Sign In
Advertisement
in: Pages suggested for renaming, Pages that need improvement, Humans,
and 7 more
English

Principal Cinch is a female human and the main[1] antagonist in My Little Pony Equestria Girls: Friendship Games. She is the former headmistress of Crystal Prep Academy. She is named Principal Abacus Cinch in the film's opening and closing credits and with a trademark symbol on her Enterplay trading card Equestrian Friends #27.

Principal Cinch appears in the film My Little Pony Equestria Girls: Friendship Games as the principal of Crystal Prep Academy. She demonstrates great pride in her school and its reputation as the undefeated winners of the Friendship Games every four years—so much pride, in fact, that she views rival institute Canterlot High School's recent boost in athletics and academics as a threat. In order to maintain Crystal Prep's reputation, Cinch forces her brightest student Twilight Sparkle to compete in the Games, going as far as to threaten revoking Twilight's application for an independent study program to ensure she competes.

During her visit to Canterlot High School, Cinch displays considerable disdain toward the school and its choice of Games competitors, comparing their selection process to a "popularity contest." She interrupts the welcome party that the school holds for their rivals to assure everyone that Crystal Prep will win the Games like it always has.

During the Tri-Cross Relay event of the Games, Cinch witnesses Twilight's amulet open a dimensional rift and release a carnivorous plant, and she watches Rainbow Dash pony up. She accuses Principal Celestia of cheating, and when Celestia suggests ending the Games in a tie, Cinch refuses, determined to prove that Crystal Prep can win regardless of the presence of magic.

In the final round of the Games, Cinch and the Shadowbolts pressure Twilight into releasing the magic from her amulet and using it against the Wondercolts, justifying it as fighting fire with fire. Her hubris results in the creation of Twilight's evil alter ego Midnight Sparkle. As Midnight slowly destroys the world around her, Cinch retreats into hiding.

After Twilight is returned to normal, Cinch demands that Principal Celestia forfeit the Friendship Games, citing Canterlot High's unfair advantage of using magic. However, the Shadowbolts turn on their principal and blame her for Twilight's wicked transformation. Cinch says that she plans to report the incident to the school board, but Celestia, Vice Principal Luna, and Dean Cadance inform her that no one would believe her story. In an effort to save face, she leaves the school with calm dignity. She last appears in a photograph with Dean Cadance and the Shadowbolts during the film's end credits.

Throughout the film, Cinch's scenes are often musically accompanied by a rather sinister-sounding tango.

Cinch is mentioned by Sunset Shimmer in the film.

When discussing the post-Friendship Games state of Crystal Prep Academy, Sunny Flare tells Rarity that Cinch is no longer principal of the school and has been replaced by Dean Cadance.

In the Friendship Games blooper reel, Cinch messes up her chair spin scene and laughs. It is the only time Cinch appears laughing or smiling.

In the replica journal Wondercolts Forever: The Diary of Celestia and Luna, Cinch appears as the recently-appointed principal of Crystal Prep Academy during Celestia's senior year at Canterlot High School.

Principal Cinch is the haughty, abusive, and manipulative principal of Crystal Prep Academy. She takes pride in her students and reputation, especially the awards that her school receives when winning the Friendship Games, and largely considers their legacy of winning her own. She also considers the human Twilight Sparkle her most prized student because of her test grades.

However, Cinch is very competitive and arrogant when it comes to opposition. She accepts nothing less than perfection from her students, as seen during ACADECA, and she shows no reservations in resorting to underhanded tactics to preserve her school's image, such as exploiting her students and cheating. She is also somewhat cowardly, leaving her students behind when she perceives Midnight Sparkle to be a monster.

"It doesn't matter whether or not Crystal Prep wins or loses. The important thing is we are expected to win because Crystal Prep has a reputation. And it is that reputation – my reputation – that is responsible for everything we have here."
— My Little Pony Equestria Girls: Friendship Games and partly Enterplay trading card Equestrian Friends #27 card of Principal Abacus Cinch

"I must apologize for the curiosity of my prized student."
— Referring to Twilight Sparkle, My Little Pony Equestria Girls: Friendship Games

"I'd like to thank Principal Celestia for her unconventional welcome. It's been four years since the last Friendship Games, but it feels as though nothing has changed. Canterlot High continues to pick its competitors in a popularity contest, and Crystal Prep continues to field its top twelve students. It is a comfort to know that, even after so many years of losses, your school remains committed to its ideals, however misguided they may be. I wish you all the best of luck, regardless of the inevitable outcome."
— My Little Pony Equestria Girls: Friendship Games

"Was this your strategy all along? To force us into accepting you as equals? I think not."
— To Principal Celestia, My Little Pony Equestria Girls: Friendship Games 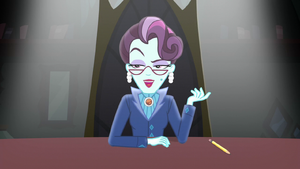