Purple Wave is a female background Earth pony who appears in The Ticket Master. She has a pink coat, violet mane, tail, and eyes, and a cutie mark of three brilliant-cut diamonds. She is unnamed in the show, but she is named in merchandise and other media.

Purple Wave shares her design with Lyrica Lilac, "Majesty", "Reflective Rock", and "Pampered Pearl", and she shares her color scheme and cutie mark with Amethyst Star.

Purple Wave's only appearance in the series thus far is in the season one episode The Ticket Master. She appears in Rarity's fantasy of the Grand Galloping Gala, admiring her with "Chocolate Tail".

Purple Wave is a playable character in Gameloft's mobile game, made available in the version 2.3 update on April 21, 2015. Her in-game description states, "This purple pony's perm turns tails wherever she goes!" 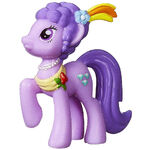 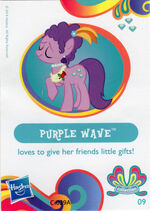 Retrieved from "https://mlp.fandom.com/wiki/Purple_Wave?oldid=2052355"
Community content is available under CC-BY-SA unless otherwise noted.