Pursey Pink is a female Earth pony who appears in Rarity Takes Manehattan, Equestria Games, Made in Manehattan, The Gift of the Maud Pie, and Fake It 'Til You Make It. She has a light yellow coat, hot pink mane and tail, cerise eyes, and a cutie mark of a handbag. She is unnamed in the show, but she is named in merchandise and other media. She has a minor speaking role in the season eight episode Fake It 'Til You Make It.

Pursey Pink first appears in the season four episode Rarity Takes Manehattan as one of the contestants in Fashion Week hosted by Prim Hemline. She is second in line to show off her designs to Prim Hemline at the practice run-through, after Suri Polomare.

In season five, Pursey Pink briefly appears riding in a Manehattan taxi carriage and cheering for Coco Pommel after the Midsummer Theater Revival.

In season six, Pursey Pink briefly appears in a Manehattan taxi again in The Gift of the Maud Pie.

In season eight, Pursey Pink appears in Fake It 'Til You Make It with sunglasses, and she has her first speaking role there.

In season nine, Pursey Pink briefly appears in She's All Yak with Rarity and the rest of the high-class ponies.

Pursey Pink appears in Hasbro's Friendship Celebration app. She is also a character in Gameloft's mobile game, and serves as an enemy minion during the "Fake It 'Til You Make It" boss battle event. Her bio states "This Manehattan-based fashionista is a bundle of conflicting, clothing-based desires. In other words, she's REALLY tought to shop for!" 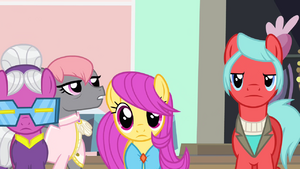