Putting Your Hoof Down is the nineteenth episode of the second season of My Little Pony Friendship is Magic and the forty-fifth episode overall. Fed up with being pushed around and ignored, Fluttershy takes a class on assertiveness taught by Iron Will. However, instead of just becoming more assertive, she becomes bossy, pushy and mean, threatening to end her friendship with Pinkie Pie and Rarity.

The storyboard artists had professional wrestler Hulk Hogan in mind when posing Iron Will,[2] who uses hand gestures that mimic Hogan's signature taunts. One of the layout artists for the show added several "easter eggs" to the marketplace scene, which were not storyboarded. These include brief appearances by Pipsqueak, Sweetie Drops, and Lyra Heartstrings.[3]

In early July 2011, the Internet Movie Database temporarily listed season 2, episode 19 of My Little Pony Friendship is Magic as "Putting your Hoof Down" with an unspecified 2011 airdate.[4]

The episode opens with Fluttershy feeding her multitude of animals. All of the pets eat eagerly except for Angel, who refuses anything Fluttershy attempts to serve him. When Fluttershy asks him what he will eat, he presents her with a recipe for an elaborate cherry-topped salad. She protests, but Angel slaps her and shoves the recipe in her face, and she yields.

In the Ponyville market, Fluttershy tries to buy asparagus from a stall, but other ponies cut in front of her. Meek as she is, Fluttershy is unable to assert herself. Pinkie Pie and Rarity see her predicament and try to teach her how to stand up for herself. Rarity uses her charm and sweet talk to buy the last bundle of asparagus from Gizmo, and Pinkie Pie tricks a tomato stall owner into selling her tomatoes at half the asked price.

Fluttershy attempts to use these methods to buy the last cherry in the market, but it backfires on her, and she ends up losing the cherry to Lemon Hearts.

Fluttershy returns to her cottage and serves the salad to Angel, apologizing for the lack of the cherry on top. Upset by this, Angel tosses both the salad and Fluttershy out the door, causing Fluttershy to crash head-first into her postbox. As she laments her being "a doormat", she finds a pamphlet for an assertiveness seminar.

"As Celestia is my witness, I'm never gonna be a pushover again!"
— Fluttershy

Fluttershy arrives at the hedge maze where the seminar is being held (tossed to the back of the crowd when she tries to squeeze into the front row). The seminar begins, and a muscular Minotaur named Iron Will dramatically appears on stage to greet the crowd of ponies. He promises that anyone who follows his advice and techniques will no longer be a pushover, even providing a 100% satisfaction guarantee – anyone who isn't fully satisfied with his training will pay nothing for the seminar. Iron Will calls for a volunteer to demonstrate his methods, and his goat assistants pick out Fluttershy.

When Fluttershy timidly walks on stage, one of the goat assistants deliberately blocks her path, at which point Iron Will delivers his first lessons (in rhyme form). Fluttershy hesitantly takes these lessons to heart and gives it a try; Iron Will is impressed and pleased, anticipating a big payday. He announces to the crowd that if his techniques can work for a shy pony like Fluttershy, then they can work for anyone. Fluttershy hears the audience cheering and smiles.

At her cottage, Fluttershy is ready to "attack the day" with a new, confident attitude. The advice given to her by Iron Will helps her stand up to Mr. Greenhooves when he over-waters her plants and Cherry Berry and Sweetie Drops when they block her path with garbage carts.

She even asserts herself when she's yet again cut in line at Sugarcube Corner, scaring Shoeshine and a handful of other ponies into moving behind her. Rarity and Pinkie Pie remark how impressed they are with "new Fluttershy". However, when Pinkie Pie makes a joke and starts laughing, Fluttershy takes the laughter as an insult and spills punch on her before happily leaving the bakery. She then hails a taxi, but Royal Riff hops into it before her. She promptly attacks and throws him from the cart, leaving a thoroughly worried Rarity and Pinkie Pie behind.

Fluttershy leaves her cottage once more with more confidence than ever. Realizing the wrong mail has been left in her postbox, she confronts the mailpony and disregards his apologies, citing Iron Will's lessons again. Moments later, the tourist Globe Trotter asks her for directions to the Ponyville Tower. As she responds, she ends up dropping her mail in a puddle. Fluttershy explodes in anger and throws Globe Trotter across the field and into a bale of hay.

Rarity and Pinkie Pie confront Fluttershy, worried about her recent behavior. Taking their concern as an affront, Fluttershy belittles and insults the two – Pinkie for her "simple little brain" and Rarity's pettiness – causing them to run away in tears. When Fluttershy calms down and sees her reflection in a puddle. Realizing how violent and unkind she's been acting, she breaks down, remorseful.

Standing up to Iron Will

Some time later, Rarity and Pinkie Pie come to Fluttershy's cottage and find the doors and windows boarded up. They knock on the door and call out to Fluttershy, but Fluttershy tells them to go away before she hurts them again. Inside, as Angel ties her to a chair, Fluttershy vows to never come out of her house again to avoid causing any more misery to her friends. Pinkie Pie and Rarity try to talk to her, placing blame for her actions on Iron Will's advice, and tell her she can stand up for herself without being mean, but Fluttershy thinks she's gone too far with her assertiveness.

Before they can talk further, Iron Will arrives to collect payment from Fluttershy after hearing news of her transformation. Rarity and Pinkie Pie attempt to charm and trick him into leaving, using the same methods they demonstrated in the marketplace, but Iron Will won't be turned away. When he knocks at Fluttershy's door and she answers, he demands his payment, but she flatly and calmly refuses, surprising Rarity and Pinkie Pie. This angers the Minotaur, but Fluttershy reminds him of his 100% satisfaction guarantee; informing him that she isn't satisfied because his teachings caused her to be mean to everypony and drive her friends away, and therefore she won't pay. Surprised by this, Iron Will tries to cut her a deal, but she firmly declines, saying "no means no". Unable to persuade her at all, and proving to be a minotaur of his word, Iron Will honors his agreement and leaves, remarking that he may use "no means no" in his next seminar.

Rarity and Pinkie Pie congratulate Fluttershy for standing up to Iron Will. The three friends reconcile and hug, happy that "old Fluttershy" has returned and that "new Fluttershy" is no more.

In her letter to Princess Celestia, Fluttershy explains that she's learned it's possible to stand up for yourself without changing who you are. When she feeds her pets, she's finally able to get the spoiled Angel to eat a regular salad, with a little help from 'The Stare'.

Pinkie Pie: Old Pinkie Pie's not so sure new Fluttershy is such a good idea after all.
Rarity: Old Rarity agrees.

Fluttershy: You make me lose, I blow my fuse!

Fluttershy: I can't believe that the two most frivolous ponies in Ponyville are trying to tell new Fluttershy how to live her life when they are throwing their own lives away on pointless pursuits that nopony else gives a flying feather about!
Pinkie Pie: [starts crying] Looks like nasty Fluttershy is here to stay!
Rarity: [starts crying] I cannot believe what that monster Iron Will has done to you!

Iron Will: Iron Will's my name, training ponies is my game!

Rarity: Oh, sweetie, we all said things that we regret.
Pinkie Pie: We did?
Rarity: Shh.

Iron Will: What do you mean you're not satisfied?! Everypony has always been satisfied!
Fluttershy: Well I guess I'm the first then. But since I'm not satisfied, I refuse to pay. It's as simple as that.
[goats bleating]
Iron Will: Ohh, are you... sure you're not just a little bit satisfied? B-because maybe... we could, cut a deal, I-I mean, we're both reasonable creatures, aren't we?
Fluttershy: I'm sorry, but no means no.
Iron Will: No means no, huh? Nopony's ever said that to me before. Huh... I gotta remember that one. That's a good catchphrase for my next workshop. 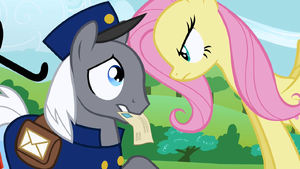 Putting Your Hoof Down image gallery