The trouble with Angel

An external shot of Fluttershy's cottage.

Even little critters can get aggressive when hungry.

So many hungry creatures.

Taking the box from Fluttershy.

This food's all MINE!!

You want some more?

Here's some for you.

Don't mess with a hypoglycemic bunny.

This will impress you.

You're feeding me this?

I wanna eat this!

Does Angel Bunny have to choke a pony?

Did someone turn out the lights? Because the humor just got very dark.
Add a photo to this gallery

You don't often get to see her shopping out and about.

Fluttershy going to get her first item. 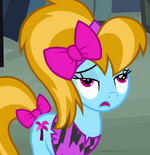 Jersey Shore meets MLP, or is it the other way around?

And now, introducing the Amazing Fluttershy!

Fluttershy on the ground.

What did you just call me?

Hey, it's one of the Iron Horses from Over a Barrel.

When Rarity starts using her charm, all is well with the world.

"Well of course you."

"Nopony ever called you handsome before?"

"Does it LOOK like anypony ever called me handsome before?"

"How about flexing some of your muscles for me."

Lucky nerd! His hoof is being held by one of the most beautiful mares in Ponyville. His peers will later be ever so envious of him.

Fluttershy's reaction after seeing the expert at work.

"All right then, what else is on your list."

Is Fluttershy in derp mode?

There's a sign back there, therefore, two bits for tomatoes is a written law.

1 bit and that's my final offer!

The last cherry on sight!!!

Imagine Cranky's surprise when she got out of that snowglobe!

I didn't know those wings could be used like hands!

Yes I'm in dire need of a cherry.

Fluttershy, trying her best to do what Rarity showed her.

I guess this ain't working...

I'm not liking what I'm seeing.

Ponies have to shave?

You're doing things all wrong!!

"And just walk away."

Assertive Fluttershy, or she's trying to be.

Even Fluttershy can understand the concept of skyrocketing prices.

Pinkie and Rarity, with equal concerned looks.
Add a photo to this gallery

A goat infestation? Oh no, he only was delivering paper spam!

No cherry, no life!!

Get the hay outta here!!!

Even this brochure is more forceful than me.

Of course the Minotaur's in a labyrinth.

Can you smelllllll . . . what Iron Will is cooking?

There's just one pony who didn't lift her hoof.

What will Fluttershy do, if somepony is in the way?

Fluttershy after bumping into one of the goats.

You tell that goat whose boss!

Come on Fluttershy! You know you can!

Why don't you watch where you're going?

Fluttershy trying to be assertive.

Assertive Fluttershy and a goat.

Fluttershy, with a cute smile.
Add a photo to this gallery

Um, excuse me...I think you're over watering my petunias...

I remember this guy...

Time for some payback...

Where did the water go?

Never look into a hose until you're sure that the faucet is closed.

He got pranked. Oof.

Now maybe he loves me!

First of all...why were they carrying that garbage wagon in the first place?

"When somepony tries to block..."

AJ would be so proud.

You mess with the great and powerful Fluttershy?

Never mess with the great and powerful Fluttershy!

Better run away Cherry Berry, she's after you...

"Made a difference in the way you carry yourself."

"You truly are a whole new Fluttershy."

Bearing witness to the new Fluttershy.

Rarity and Pinkie Pie see that some havoc is going to happen.

Fluttershy just rained down a world of hurt.

Why I do believe she is flipping us off!

"Old Rarity agrees."
Add a photo to this gallery

"This is the new me"

By the way, is there such thing as bills in this world?

Maybe he wasn't blind after all.

Return of that birthday pony.

This will not end well.

Fluttershy is not making any sense.

Holy Luna, how does she manage things like this?

This was once a docile pony?

If Rarity cries all is not well with the world.

"Fashion is her passion."

"And what are you passionate about? Birthday cake? Party hats?"

You monster, how dare you make Pinkie and Rarity cry? :'(

"Iron Will's not a monster,"

Fluttershy realizes the mistakes she's made

Fluttershy returns to her home

Dusk time
Add a photo to this gallery

Is Fluttershy being serious?

I feel a fanfic coming...

Looks like Derpy isn't the only one who can go crossed eyed.

Fluttershy's feeling unsure about the situation.

It most certainly looks like they're looking at us.

Trying to reason with Iron Will

You know Rarity is doing a SQUEE!

Move aside, I'm here for Fluttershy.

He does have some grocery shopping to do

Iron Will will come back later this afternoon!

Pinkie and Iron Will arguing about when Iron Will should come back.

Iron Will wants to return in a half day.

You can always count on Pinkie Pie to stick her neck out for her friends!

Believe it or not, she's walking on air...

Iron Will is not sure of what he's doing.

Oh, my goodness. He threw Pinkie!

Who knew that Iron Will had some good manners.

Both Rarity and Pinkie Pie are super worried!

Can she do that?

What big eyes they have.

What did you say?

Did Fluttershy just do that?

We all know this has to be the best moment ever.

Back to being friends again!

Rarity glad to have the old Fluttershy back...

...For now...But wait until Canter-Clash!
Add a photo to this gallery

Angel still wants a cherry on his salad.

It's super effective!
Add a photo to this gallery
Retrieved from "https://mlp.fandom.com/wiki/Putting_Your_Hoof_Down/Gallery?oldid=2190925"
Community content is available under CC-BY-SA unless otherwise noted.