Quibble Pants is a male Earth pony and Daring Do fan who appears in the season six episode Stranger Than Fan Fiction and the season nine episodes Common Ground and The Last Problem.

Quibble Pants' color scheme is similar to that of Daring Do and Gallant True.

In early June 2016, Latin American dub director Maggie Vera posted on Facebook that Quibble is voiced by Enzo Fortuny in the Latin American Spanish dub[1] and commented about Quibble being a character in Stranger Than Fan Fiction.[2]

To "quibble" means to complain or argue about a specific subject to the point of petty nitpicking.

Quibble Pants appears in Stranger Than Fan Fiction as an attendee of the Daring Do Convention in Manehattan. When first introduced, he is shown to be a huge fan of the Daring Do book series, even cosplaying as Daring and quoting pages of the series with perfect recall. He meets Rainbow Dash at the convention, and he is pleased to meet a fan who is as passionate about the series as he is.

However, as Rainbow gets to know him, Quibble is revealed to only be a fan of the original Daring Do trilogy, and he refuses to acknowledge the existence of the later books due to his skepticism of said books' realism. Because such an opinion puts him at direct odds with Rainbow's opinions, the two have a heated falling-out.

Later in the episode, Quibble Pants is dragged along with Rainbow Dash when they are captured by Dr. Caballeron under suspicion of working for Daring Do herself. However, Quibble believes the entire thing to be an act that Rainbow Dash orchestrated to prove his opinions wrong. After they escape from Caballeron and journey through a jungle, Quibble acknowledges the danger he is in, but he still writes it off as a performance with poor safety precautions.

When Quibble comes face-to-face with a monstrous Cipactli and meets the real Daring Do, he finally accepts everything happening around him as real, and he uses his knowledge of the Daring Do series to solve a treasure puzzle. In the end, while he still doesn't like the Daring Do books released after the original trilogy, he accepts the realism in them as well as Rainbow Dash's reasons for enjoying them.

In Common Ground, Quibble Pants attends the buckball tournament in Appleloosa with his girlfriend Clear Sky and her daughter Wind Sprint. Quibble strives to bond with Wind Sprint over sports, but he knows nothing about sports. With Rainbow Dash's help, he tries to become a sporty pony, but he fails miserably due to his lack of athleticism and coordination.

It is later revealed that Wind Sprint resents Quibble because she believes he is trying to replace her absent birth father. After Clear Sky makes it clear that Quibble is not trying to take her father's place, Quibble and Wind Sprint finally bond as she teaches him about the sport of buckball and he explains various buckball plays and statistics for her.

In My Little Pony/Transformers Issue #1, Quibble appears on page 1 reading a copy of Daring Do Meets the Power Ponies and complaining about crossover stories.

Quibble Pants is a character in Gameloft's mobile game, and serves as both a boss and boss battle helper with a story role during the "Wonderbolt for a Day" event. His in-game bio states, "He claims to be Daring Do’s most fervent fan... well, of SOME of her books. (The rest just don’t scan!)"

QUIBBLE PANTS is a fellow Daring Do super fan who is absolutely sure which A. K. Yearling books are the very best. No argument will change Quibble's mind! Over time, though, he and Rainbow Dash realize ponies can love things for very different reasons, and that's okay.

Similar to Rainbow Dash, Quibble Pants is portrayed as an overenthusiastic Daring Do fan. While he is mostly friendly and excitable when it comes to the original book trilogy, he is overly cynical, sarcastic, and critical in regards to the later books, calling A. K. Yearling a sellout for dumbing down the series. He is also prone to long-winded rants. However, due to Quibble's intricate knowledge of the Daring Do series, he is able to improvise in dangerous situations and solve puzzles far more quickly than even Daring Do can.

In his return appearance, Quibble is shown to be a loving and attentive boyfriend to Clear Sky. He is also intent on earning Wind Sprint's approval, to the point of being unwilling to continue dating her mother if Wind does not approve of him.

"Now this is something that only a true fan can appreciate."
— Stranger Than Fan Fiction

"I don't hate Daring Do. The first series was smart and cool and an amazing nod to old-time serialized adventure books that somehow manages to be self-reflective and ironic while at the same time celebrating the art form without a hint of cynicism. Which is why I came here to ask A. K. Yearling muzzle-to-muzzle why she sold out and dumbed down the rest of her books into just a series of impossible action sequences!"
— Stranger Than Fan Fiction

"...which would make Daring Do left-hoofed, which we know is false, and that is everything that's wrong with Daring Do and the Trek to the Terrifying Tower. Now, the problems with the next book are even—"
— Stranger Than Fan Fiction

"Listen, buddy, I don't take orders from some second-rate performer who learned acting from the Supervillain School of Bad Accents! The only thing this mess is missing is some giant Ahuizotl wannabe monster, and I have a feeling that would be too much for you bargain-basement adventurers to pull off!"
— To Dr. Caballeron, Stranger Than Fan Fiction

"Seriously, do you ever not escape out of the top of a temple?!"
— To Daring Do, Stranger Than Fan Fiction

"I love the Daring Do that solves puzzles and uses her brain to get out of tough situations, and she did way more of that in the original trilogy! You love the Daring Do that is brave and awesome and comes out on top no matter what the odds! [...] And that's okay! We might never agree on what makes Daring Do cool, but you... are definitely cool. I-I mean, the way you saved me on the bridge? Wow! And escaping from the temple... you, Rainbow Dash, are awesome."
— Stranger Than Fan Fiction

"This is hopeless. I... I don't have any skills. Not agility, not speed. I-I can't even lift more than one book, and I love books!"
— Common Ground

"See?! This is why these nonsense crossover stories shouldn't even happen! What continuity is this even supposed to take place in?! If Dr. Caballeron still has his castle, then this should be before Daring Do has the Sapphire Skull!"
— My Little Pony/Transformers Issue #1

"Look behind me? Ha! As if I'd fall for the oldest trick in the book."
— Enterplay collectible card game Defenders of Equestria #62 U card of Quibble Pants 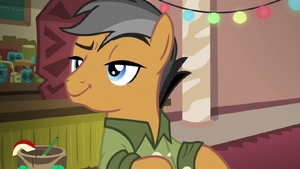