Rainbow Blaze is a male Pegasus pony and "mentor" of Rainbow Dash who appears in the episodes Games Ponies Play and A Hearth's Warming Tail. He has a pale periwinkle coat, a rainbow-striped mane and tail, amber eyes, and a cutie mark in most materials of what appears to be a multicolored airstream through cloud(s) and in Gameloft's mobile game of a five-pointed object with a rainbow streak. He is unnamed in the show, but he is named in merchandise and other media.

Rainbow Blaze's cutie mark on his Gameloft mobile game model appears to be based on fanart.[6]

Rainbow Blaze has made two appearances in the series thus far. The first is in the season three episode Games Ponies Play. He appears in a flashback with a filly Rainbow Dash. Rainbow Dash sits on top of his head as Laurette announces Fillydelphia as the location to host that year's Equestria Games.

He also appears in A Hearth's Warming Tail, where he sings the final carol along with the rest of the cast.

Rainbow Blaze appears in a picture with his name listed on the IDW comics' Friends Forever Issue #18 regular cover.

Rainbow Blaze is a character in Gameloft's mobile game. His in-game description states, "Rainbow Dash always looked up to this gifted flier, ever since she was a filly. Sometimes literally -- he was up in the sky a lot back then!"

Rainbow Blaze was first named on his Enterplay collectible card game Canterlot Nights expansion set card #17 C, which shows him in Canterlot Castle and lists the quote, "Of course Rainbow Dash is a good flier. I taught her everything she knows!" 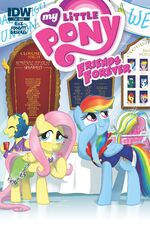 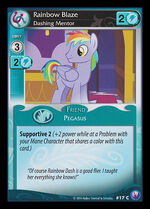