For the village, see Locations#Rainbow Falls.

Rainbow Falls is the tenth episode of the fourth season of My Little Pony Friendship is Magic and the seventy-fifth episode overall. In this episode, Rainbow Dash is torn between choosing the Ponyville team and the Cloudsdale team for the Equestria Games.

The episode is included in the upcoming DVD A Dash Of Awesome,[2] which was announced in early December 2013.[3][4]

The title of the episode was previously revealed in early August 2013 on Amazon as part of the title of the upcoming April 8, 2014 24-page storybook Welcome to Rainbow Falls!, in which "the ponies attend the famous sporting event known as the Equestrian[sic] Games", before its name was replaced with "Spring 2014 8x8" on the Amazon listing[5] in mid-August 2013;[6] some other websites' listings of the book still include the name.[7][8]

A small part showing Pinkie dressed up as a cheerleader reappears in Cakes for the Memories.

The scenes when Rainbow Dash qualifies Ponyville for the Equestria Games, and when she admits her wrongs to her friends reappears in Deep Tissue Memories.

On the way to the tryouts in the town of Rainbow Falls, Helia and Thunderlane apologize to Rainbow Dash for not being able to compete in the aerial relay as they are competing in the sprint events; the Games' rules forbid any pony from competing in more than one event. Twilight Sparkle speaks with Rainbow Dash about her less-than-impressive team, Rainbow remarking that she's confident she'll be able to pick up their slack. Their friends are all equally excited about the tryouts for varying reasons.

Rainbow Dash and her friends enter the tryout grounds, where numerous other Pegasi and several griffons are gathered, just in time to watch the Wonderbolts Spitfire, Soarin, and Fleetfoot arrive with their own cheering section. Rainbow Dash coaches her teammates about the qualifiers and attempts to instill some confidence in them, but their coordination pales in comparison to the Cloudsdale team of Wonderbolts. Realizing this, Rainbow Dash's own confidence begins to falter.

To help raise the team's spirits, Rainbow Dash has Fluttershy and Bulk Biceps watch Soarin practice for the qualifiers in hopes that they "learn something." During his practice run, Soarin is distracted by a pair of cheerleaders and clips his wing on a hoop, sending himself into a tailspin. Rainbow Dash saves Soarin just before he hits the ground, and he's carted off with an injured wing.

Now one relay team member short and impressed by Rainbow Dash's flying, Spitfire and Fleetfoot offer the vacant spot on their team to Rainbow Dash since she's originally from Cloudsdale; Fleetfoot quickly adds that it'd only be until Soarin recovers. Rainbow Dash is unsure about practicing with two teams at once—especially behind one team's back—but after a bit more encouragement, she accepts.

Rainbow Dash splits her practice times between the Ponyville team and Cloudsdale team, finding that her aerial coordination with Spitfire and Fleetfoot is much better than with Fluttershy and Bulk Biceps. Twilight starts to grow suspicious when she sees Rainbow Dash fly off every now and then. When Twilight finds out about Rainbow's secret practice runs with the Wonderbolts and confronts her, Rainbow argues that the Ponyville team will still qualify with her on it and that "it's more fun working out with the winners than the non-winners."

At that moment, Spitfire and Fleetfoot approach Rainbow Dash. They tell her that Soarin won't recover in time for the tryouts and offer her a permanent spot on the Cloudsdale team. However, her joining the Cloudsdale team means she won't be able to fly with the Ponyville team. Rainbow Dash is excited about the opportunity, but Twilight informs her of all the ponies she'll let down if she accepts. An uncertain Rainbow Dash asks Twilight what she would do, but Twilight tells her it's a decision she has to make on her own.

Choosing not to choose

Later, Rainbow Dash appears on the tryout grounds covered in bandages and bound to a wheelchair. She feigns injury and wails about being unable to fly with either team. Twilight is skeptical of the obvious ruse.

Rainbow Dash is brought to a hospital bed, continuing to fake being hurt. When Fluttershy and Bulk Biceps check in on her, they tell her not to worry about the tryouts, having found a replacement flyer: Derpy. They also promise that, if they qualify for the Equestria Games and win gold medals, they'll give them to her. Rainbow Dash's friends leave to let her rest, and before she joins them, Twilight tells Rainbow that "choosing not to choose isn't really a decision".

In the adjacent hospital bed, Soarin is envious of Rainbow Dash and her friends, noting that no one's visited him during his stay. When he tells Rainbow that his wing isn't hurt and that he's been benched due to Spitfire and Fleetfoot's concerns, Rainbow realizes both she and Soarin have been lied to. As sunlight enters the room and covers a dropped flag in colors, Rainbow Dash's eyes shimmer with a rainbow-colored aura.

The magic of loyalty

Rainbow Dash also confronts Spitfire and Fleetfoot for lying to her about Soarin's wing just to replace him with her—which Soarin is also displeased about. The two Wonderbolts commend Rainbow for her loyalty, saying that they could learn a lot from her, and invite Soarin back onto their team. As the Cloudsdale team flies off, Rainbow and the Ponyville team join them.

In the Golden Oak Library, Rainbow Dash writes her latest lesson in the Mane Six's journal, reflecting that while she enjoys winning, her love and loyalty to her friends will always come first.

Rainbow hangs her medal and Wonderbolt pin on the journal's lectern before joining her friends outside. As she leaves, the Wonderbolt pin briefly shines with a multicolored light the same way the spool of thread shone in Rarity Takes Manehattan.

Rainbow Dash: So, do I need to remind you of what our goal is here?
Bulk Biceps: Uh, maybe?

Fluttershy: Oh Rainbow Dash, I'm so proud of you. You scooped Soarin out of the sky and brought him down to the ground and now, now he's okay. At least, I hope he's okay. [to Soarin] Are you okay?

Spitfire: We put you through some pretty intense workouts at the Wonderbolt Academy and you handled those just fine.

Rainbow Dash: I, uh, tripped on a, uh, foam hoof, and landed on a [mumbles, near unintelligible] pokey stick coming out of the ground...
Pinkie Pie: Grrrr!! If I get my hooves on that [matching unintelligible gibberish], it'll be in big trouble!

Twilight Sparkle: You know, choosing not to choose isn't really a decision. 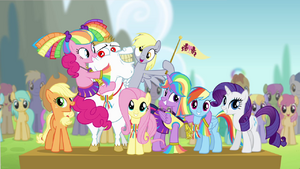