Rainbow Stars is the placeholder name of a female background unicorn pony who first appears in Brotherhooves Social. She has brief speaking roles in Triple Threat and Horse Play, credited as "Pony 2" in the former and as "Audience Member" in the latter.

Rainbow Stars has a pale greenish gray coat, red and orange mane and tail, blue eyes, and a cutie mark of a rainbow with a cloud and three stars. She shares her design, eye color, mane bow, and tail bow design with S06E06 Unnamed Unicorn Mare #1 and has a similar color scheme to "Rainberry".

Rainbow Stars first appears in Brotherhooves Social as one of the competitors in the Sisterhooves Social, participating alongside "Rainberry". During the sister-singing portion of event, she and "Rainberry" briefly sing an operatic aria. In The Mane Attraction, Rainbow Stars appears in Coloratura's audience during The Magic Inside at the Helping Hooves Music Festival.

Rainbow Stars manages a stand at the Ponyville marketplace at the beginning of The Perfect Pear and appears among multiple ponies boycotting the Mane Six in Fame and Misfortune. In Triple Threat, she has a brief speaking role arguing with Crusoe Palm over a seat at the Ponyville Cafe before Spike steps in to settle the argument. She also makes cameo appearances in It Isn't the Mane Thing About You standing in line to buy Mare Day flowers at the Ponyville marketplace and approaching the Cutie Mark Crusaders' table for a Cutie Mark Day Camp in Marks and Recreation.

Rainbow Stars makes brief appearances outside the School of Friendship in School Daze - Part 1, at Maud Pie's birthday party in The Maud Couple, and on the Friendship Express train in Surf and/or Turf. In Horse Play, she attends Twilight Sparkle's play commemorating Princess Celestia's "ones-versary" and has a short speaking role as a heckler in the audience. In The Parent Map, she appears outside of the Castle of Friendship talking to Amethyst Star. In The Break Up Break Down, she and Noteworthy appear to be on a Hearts and Hooves Day date in Ponyville. In Yakity-Sax, she walks with Golden Harvest while carrying a cake at the party for Pinkie Pie at Sweet Apple Acres, and later appears attending Pinkie Pie Appreciation Day near Ponyville Town Hall.

In the special My Little Pony Best Gift Ever, Rainbow Stars appears at the Ponyville marketplace singing One More Day and later operating a honey stand on the day before Hearth's Warming Eve.

In The Beginning of the End - Part 2, Rainbow Stars appears as one of King Sombra's mind controlled slaves following him to Canterlot and later in a window at Canterlot Castle glaring at the Mane Six when they arrive at Canterlot's gates. In The Point of No Return, she shakes her head after Twilight Sparkle knocks on her door to ask her if she knows where Dusty Pages is. In Common Ground, she appears in the opening newsflash on the rise in popularity of buckball and is later among the crowd of ponies asking for autographs from Snails in Appleloosa. She later appears in the crowd for the exhibition buckball game at the Appleloosa buckball tournament. In The Last Crusade, she makes a background appearance walking through Ponyville. In Between Dark and Dawn, she appears giving a letter to Derpy at the Ponyville Post Office. In 2, 4, 6, Greaaat, she appears spectating the buckball game between the School of Friendship and the School of Magic and its halftime cheerleading routine. In The Summer Sun Setback, she appears standing behind a fireworks cannon as they are ignited during the final Summer Sun Celebration. In Dragon Dropped, she makes a background appearance being delivered mail by Spike and Gabby. In A Horse Shoe-In, she attends Octavia Melody's concert with DJ Pon-3. In Daring Doubt, she attends Ahuizotl's public book reading at a Manehattan bookstore. In Growing Up is Hard to Do, she appears at the signup table for the Appleloosa County Fair Animal Showcase. In The Ending of the End - Part 2, she appears in the School for Gifted Unicorns taking shelter from the Windigos with the other unicorns as they isolate themselves from the other pony tribes. In The Last Problem, she appears in future Canterlot standing around a statue of the Mane Six and also in a flashback as a passenger on the Friendship Express to Canterlot. 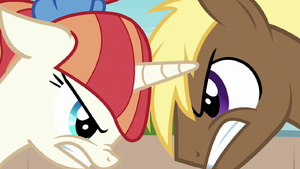