Rainbow Swoop, or Purple Waters, is a background Pegasus pony with a light bluish-purple coat, dark gray mane, sea green eyes, and a cutie mark of a purple, orange, and yellow-striped rainbow. He is not named on the show, but he is named "Rainbow Swoop" with a trademark symbol and "Purple Waters" in different merchandise.

Rainbow Swoop makes several appearances throughout the series, usually in episodes in which other Pegasus ponies are also featured.

He first appears in Sonic Rainboom, flying through Cloudsdale alongside Compass Star as Rainbow Dash introduces her friends to the city of clouds.

He later appears as a participant in the pageant in Hearth's Warming Eve; he helps Pinkie Pie with her costume before the pageant begins, and he appears among other Pegasi during.

A wingless version of Rainbow Swoop appears in The Super Speedy Cider Squeezy 6000. In Hearts and Hooves Day, he appears briefly in Apple Bloom's vision of a future Ponyville, flying through a house wall. In Hurricane Fluttershy, Rainbow Swoop is one of the Pegasi enlisted by Rainbow Dash to help transport water to Cloudsdale.

Rainbow Swoop appears in numerous shots in Rainbow Falls, flying in the background with Orange Swirl, Prism Glider, and/or "Bon Voyage", and he is also on a qualifying Equestria Games aerial relay team with Orange Swirl and Rainbowshine. He is also seen in Pinkie Pride, watching the Goof Off between Pinkie Pie and Cheese Sandwich and later at Rainbow Dash's birth-iversary party. In Equestria Games, Rainbow Swoop takes part in the titular sporting event with his teammates.

Rainbow Swoop is among the pegasus ponies bringing winter to Ponyville in Tanks for the Memories, and among the spectators at the finish line in Brotherhooves Social.

In The Cart Before the Ponies, Swoop is seen watching the Applewood Derby. In The Fault in Our Cutie Marks, he is seen in the stands of a baseball game. In Top Bolt, Rainbow Swoop is seen twice: once in the establishing shot of the Wonderbolt Academy, and again catching Sky Stinger in a net.

In A Flurry of Emotions, Rainbow Swoop is seen entering an art exhibit with Parasol. In Fame and Misfortune, he is seen flying with Sunshower Raindrops. Swoop is also seen approaching a flower stand in It Isn't the Mane Thing About You.

In School Daze - Part 1, a panicked Rainbow Swoop makes a background appearance flying away from the School of Friendship as Ocellus crashes into the school while transformed into an insect monster.

In Common Ground, Rainbow Swoop makes a cameo appearance cheering in the crowd during the exhibition buckball game during a tournament in Appleloosa. In The Last Problem, he makes a background appearance flying outside future Canterlot, despite not looking visibly older.

A translucent mini-figure toy of Rainbow Swoop was released as part of the tenth wave of mystery pack toys and collector cards and named with a trademark symbol. The collector card depicts him with Soarin's design and states that he "loves to fly over rainbows as fast as he can!"

In the Canterlot Nights expansion set of Enterplay's collectible card game, Rainbow Swoop is named "Purple Waters" on his own card #41 C, which gives him the description "Purple's albums such as 'The Fence' have made him legendary in Equestria. Singing evocative lyrics like: '...and when DJ-Pon 3[sic] starts spinning different tunes, I'll see the Dark Mare of the moon.' leaves everypony hoof-stomping for more!" Enterplay's May 13, 2014 Canterlot Nights card list lists card #41 C as "Full Spectrum, Prismatic Pony" instead of "Purple Waters, Prismatic Poet/Musician". 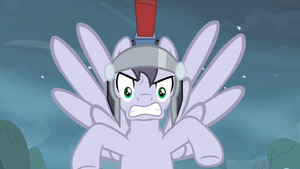