Rainbowshine is a female Pegasus pony with a wisteria coat, pink lace mane and tail with baby pink streaks, charm pink eyes, and a cutie mark of a rainbow. The show does not name her, but she receives her name from merchandise. She shares her design with Orange Swirl, and she has a similar color scheme to S01E14 Unnamed Unicorn Mare #5, "Swirly Cotton", "Rainbow Drop", "Northern Lights", "Amethyst Beat", S04E20 Unnamed Pegasus Mare #3, Sweetsong, Star Dasher, and Bright Bridle. She has brief speaking roles in Winter Wrap Up, Sonic Rainboom, Rainbow Falls, and Leap of Faith.

Rainbowshine is commonly featured as a background pony in Ponyville and Cloudsdale.

Her first appearance is in Friendship is Magic, part 1 where she hovers inside the Ponyville town hall, awaiting the start of the Summer Sun Celebration.

In the episode Winter Wrap Up, Rainbowshine starts off as a member of the weather team before suddenly changing to the plant team late in the song and then back to the weather team near the end. She is one of the ponies sent by Rainbow Dash to retrieve the southern birds—the other ponies include Sunshower Raindrops, Cloud Kicker, and Sprinkle Medley. She delivers her first spoken line upon her return, although she appears plenty of times still in Ponyville before that moment.

In Sonic Rainboom, Rainbowshine appears as a worker at a weather factory in Cloudsdale, working in all three sections. Here, she has her second speaking role: after seeing her beautiful gossamer wings, she suggests that Rarity should enter the Best Young Flyer competition.

Rainbowshine appears in Princess Twilight Sparkle - Part 1 and Princess Twilight Sparkle - Part 2. In Rainbow Falls, she participates on a relay team with Orange Swirl and Rainbow Swoop, and they qualify at the end of the trials. She also appears in Pinkie Pride, Simple Ways, Filli Vanilli, It Ain't Easy Being Breezies, For Whom the Sweetie Belle Toils, Leap of Faith, Trade Ya!, Equestria Games, Twilight's Kingdom - Part 1, and Twilight's Kingdom - Part 2.

In Bloom & Gloom, Rainbowshine appears fleeing from a swarm of twittermites. In Tanks for the Memories, she moves clouds with other Pegasi in preparation for winter. In Slice of Life, she appears in various crowd shots in Ponyville. In Do Princesses Dream of Magic Sheep?, she appears in Ponyville's shared dream, escaping from one of the monster houses. In Brotherhooves Social, Rainbowshine watches the Sisterhooves Social and follows the crowd carrying Rainbow Dash and Scootaloo. In The One Where Pinkie Pie Knows, she makes a cameo appearance flying in Ponyville. In The Mane Attraction, she receives a hoofsie from Countess Coloratura during preparations for the helping Hooves Music Festival at Sweet Apple Acres and later appears in the audience for her performance of The Magic Inside during the festival itself. In The Cutie Re-Mark - Part 1, she appears in an alternate timeline directing sheep near a dock with Sassaflash for the war effort against King Sombra.

In The Gift of the Maud Pie, Rainbowshine makes a cameo appearance walking in Manehattan in the evening. In On Your Marks, she appears in the audience for Tender Taps' dance recital. In No Second Prances, she appears flying through Ponyville to Berryshine's window with Sassaflash and later appears with Thorn watching Twilight gallop through Ponyville at night. In Newbie Dash, she appears watching the Wonderbolts' flight show, both from the bleachers, and on a cloud. In A Hearth's Warming Tail, she appears during Hearth's Warming Eve Is Here Once Again decorating a large candy cane in the park for Hearth's Warming Eve and subsequently flying with presents during the Hearth's Warming Eve celebration in the Castle of Friendship. In Flutter Brutter, she makes a background appearance moving clouds with Parasol in Cloudsdale. In The Cart Before the Ponies, she appears during Derby Racers spectating the Applewood Derby from a window with Twinkleshine and by herself by the racetrack. In The Fault in Our Cutie Marks, she appears watching Tender Taps' dance performance in Ponyville. In Every Little Thing She Does, she appears pushing storm clouds over the Castle of Friendship due to orders from a spell-enchanted Rainbow Dash.

In Parental Glideance, Rainbowshine appears spectating the Wonderbolts' showcase in Canterlot. In Honest Apple, she appears in the audience for the first Couture du Future Fashion Contest outside the Carousel Boutique. In Fame and Misfortune, she appears in the arguing mob congregating outside the Castle of Friendship. In It Isn't the Mane Thing About You, she appears receiving a bouquet of flowers at the Ponyville Marketplace and later in a crowd outside Quills and Sofas. In Secrets and Pies, she appears sitting on the outdoor dining area of the Sugarcube Corner at a table with Ponet.

In the special My Little Pony Best Gift Ever, Rainbowshine appears as a patron at the Rainbow Falls Hearth's Warming Craft Exchange where she buys a Holly the hearth's Warmer doll from Flim and Flam's stand and also watches as Fluttershy and Applejack foil their scheme.

In The Beginning of the End - Part 1, Rainbowshine appears very briefly talking with Orange Swirl in Canterlot. In 2, 4, 6, Greaaat, she spectates the buckball game between the School of Friendship and Princess Celestia's School of Magic and also watches the halftime cheerleading routine. In The Summer Sun Setback, she appears in the audience for the final Summer Sun Celebration in Canterlot. In A Horse Shoe-In, she appears in the audience for Octavia Melody's concert with DJ Pon-3. In Growing Up is Hard to Do, she appears as a passenger on the Friendship Express during Being Big is All It Takes. In The Ending of the End - Part 2, she appears trying to move a cloud in Cloudsdale blown by enchanted wind created by windigos as the Pegasi close themselves off from the other pony races.

Rainbowshine is one of many ponies seen in the establishing shot of Ponyville in My Little Pony Equestria Girls: Rainbow Rocks.

Rainbowshine briefly appears flying toward the entrance of the Canterlot library. She also appears alongside Sprinkle Medley in the second establishing shot of Canterlot.

In My Little Pony The Movie, she makes a background appearances flying through the Canterlot basilica during preparations for the Friendship Festival and later standing by an unnamed mare.

Rainbowshine is a character named "Inquisitive Shopper" in Gameloft's mobile game. Her bio states, "This pony always asks all the questions she can think of, to every Craft Fair vendor she sees. How else is she going to find the Perfect Gift?"

Rainbowshine appears in All About Alicorns, in Cutie Mark Magic, and in Hearth's Warming Eve.

Rainbowshine appears in episode 5 of Fundamentals of Magic, "When Magic Goes Wrong".

Rainbowshine is also part of the thirteenth wave of mystery pack toys and collector cards. "She loves to leap!"

Rainbowshine, along with a host of characters from the show, appears on the Comic Con 2011 promotional poster. She is behind Big McIntosh, smiling with her mouth wide open.

Rainbowshine also appears with her name listed with a trademark symbol in Enterplay's collectible card game, which is the first time that she is simultaneously referred to by name and depicted with the same design and cutie mark coloration as in the show. Her cards α #16 C and α #ƒ10 both give her the description "Rainbowshine works on both the Ponyville weather team and at the Cloudsdale weather factory. It's quite the daily commute, but she says it's worth the climate control experience." In the game's expansion set Canterlot Nights, #71 C, a card of Foggy Fleece, attributes to Rainbowshine the quote "We tried to throw a retirement party for Foggy Fleece once. She said, 'You can't get rid of me that easy,' and went back to work."[6] In the game's expansion set Defenders of Equestria, #76 U, another card of Rainbowshine, attributes to Lemony Gem and Mint Jewelup the respective quotes "Wow, is that Rainbowshine? Where has SHE been all this time?" and "No idea. Those presents better not be for YOU, though."

"Ditzy Doo accidentally went north to get the southern birds!"
— Winter Wrap Up

"Hey, there's an idea! You should enter the competition!"
— Sonic Rainboom

"Hooves down, cakes up!"
— Rainbow Falls

"Are you saying you lied?"
— Leap of Faith

"We tried to throw a retirement party for Foggy Fleece once. She said, 'You can't get rid of me that easy,' and went back to work."
— Enterplay collectible card game Canterlot Nights expansion set card #71 C of Foggy Fleece 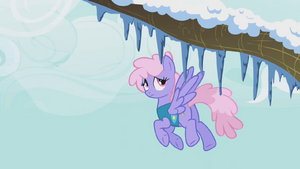