Rainy Feather is the placeholder name of a Pegasus pony filly who first appears in the season one episode The Cutie Mark Chronicles. She has a light yellow coat, turquoise mane and tail, and deep turquoise eyes.

She, along with "Tornado Bolt", Cotton Cloudy, "Princess Erroria", "Noi", Aura, and Liza Doolots and as well as Prim Posy, Lemony Gem, "Serena", "Pinkie Feather", "Mango Dash", and "Sweet Pop", was to appear in Friendship is Magic, part 2.[1]

Rainy Feather first appears in The Cutie Mark Chronicles. She is seen in both Fluttershy and Rainbow Dash's flashbacks cheering during the race at Cloudsdale flight school.

Rainy Feather listens to Ms. Harshwhinny and Rainbow Dash's presentation in Flight to the Finish, appears as an Earth pony at the beginning of Simple Ways, and becomes awestruck with both Twilight Sparkle and the Cutie Mark Crusaders in Twilight Time.

Rainy Feather watches Tender Taps' dance recital in On Your Marks, sitting next to Goldengrape. In The Cart Before the Ponies, she appears spectating the Cloudsdale Derby in Rainbow Dash's flashback.

In Parental Glideance, Rainy Feather appears spectating the Wonderbolts' showcase in Canterlot from the private box with Goldengrape and another unnamed foal. In Fame and Misfortune, she appears as one of Rainbow Dash's fan fillies following her and holding a copy of the Journal of Friendship. In Secrets and Pies, she appears talking in Ponyville with Aura and Noi and runs to take Pinkie Pie's pies from Rainbow Dash when she deliberately mentions it to them.

In Marks for Effort, she makes cameo appearance flying out of the Ponyville Schoolhouse after class ends. In The Washouts, she appears in the audience for the titular group's second Ponyville show. 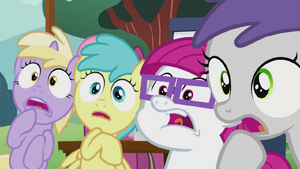