Start a Wiki
Randolph is an elderly male Earth pony who appears in Twilight Time, Crusaders of the Lost Mark, and The Cart Before the Ponies as a butler for Diamond Tiara's family. He has a pale blue coat, white mane and tail, blue eyes, and a cutie mark of a feather duster.

Randolph first appears in the season four episode Twilight Time when he accompanies Diamond Tiara to the Ponyville Schoolhouse. Having promised to perform an "amazing, first-time-ever acrobatic display" for her classmates, Diamond Tiara instead gets Randolph to perform in her place. While Randolph's display is impressive, Diamond Tiara pushes him aside and takes credit for it.

In the season five episode Crusaders of the Lost Mark, Randolph carries a large stone statue of Diamond Tiara for Spoiled Rich to celebrate Diamond winning the school presidential election. He later appears beside Sweetie Drops during Light of Your Cutie Mark.

In the season six episode The Cart Before the Ponies, Randolph is Diamond Tiara's second in the Applewood Derby.

In the Rarity ending of the Choose Your Own Ending short Driving Miss Shimmer, Randolph's human counterpart appears as Rarity's limo driver. He sits in the passenger's seat when Sunset Shimmer uses the limo to practice for her driving test.

Randolph is a playable character in Gameloft's mobile game, added in the version 2.3 update on April 21, 2015. He serves as a boss battle helper during the "Rarity's Retro Revolution" event. His in-game description reads "Randolph serves as Diamond Tiara's faithful butler. From cleaning and serving to playing life-size Monopoly, Randolph is a butler who can do it all!"

Randolph appears on the season 4 poster behind Diamond Tiara and Silver Spoon. In the Crystal Games expansion set of Enterplay's collectible card game, card #15 C of Randolph gives him the description "Randolph was always very impressed by pegasus aerial maneuvers, so much so that he picked up acrobatics as a serious hobby." 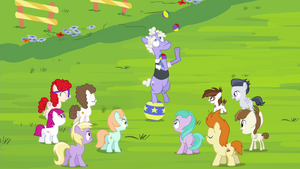 Retrieved from "https://mlp.fandom.com/wiki/Randolph?oldid=2142693"
Community content is available under CC-BY-SA unless otherwise noted.