Rare Find is a male unicorn pony with a brown coat, white mane and tail, blue eyes, and a cutie mark of four green gems. He is unnamed in the show, but he is named in merchandise and other media. He has a speaking role in Twilight's Kingdom - Part 1.

In mid-July 2012, more than a year earlier than the release of Enterplay's collectible card game cards first naming Rare Find, "Background Pony #EE15" commented on fanart of the character online "I came up with a name for this one – Rare Find."

Rare Find appears as multiple of the hat-wearing spectators at the Wonderbolts Derby in Sweet and Elite, listening to Applejack's speech outside the Ponyville town hall in The Last Roundup, at Sweet Apple Acres sometimes talking to Daisy in The Super Speedy Cider Squeezy 6000, during the Smile Song in A Friend in Deed, scared away by Cerberus in It's About Time, and in the audience of the interrupted wedding ceremony in A Canterlot Wedding - Part 2.

Rare Find appears as multiple crowd members at the Summer Harvest Parade in One Bad Apple, with a suitcase at the Crystal Empire train station in Just for Sidekicks, and at Sugarcube Corner during the song What My Cutie Mark Is Telling Me in Magical Mystery Cure.

Rare Find appears watching the Summer Sun Celebration in Princess Twilight Sparkle - Part 2, during the songs The Super Duper Party Pony and The Goof Off in Pinkie Pride, as an audience member both at the Cutie Mark Crusaders' play and at Sweetie Belle's dreamt award-giving in For Whom the Sweetie Belle Toils, during the song Flim Flam Miracle Curative Tonic at Flim and Flam's tent in Leap of Faith, at the Rainbow Falls Traders Exchange in Trade Ya!, as an Equestria Games participator in Equestria Games, with a speaking role levitating a bucket of oranges then getting his magic stolen by Lord Tirek at a Canterlot alley[5][6][7] in Twilight's Kingdom - Part 1, and at Manehattan in Twilight's Kingdom - Part 1 and its recap at the beginning of Twilight's Kingdom - Part 2.

Rare Find helps prepare Ponyville for winter in Tanks for the Memories, watches the Appleloosa Rodeo in Appleoosa's Most Wanted, attends the Grand Equestria Pony Summit in Princess Spike, and appears at Canterlot Carousel's grand opening in Canterlot Boutique.

In The Gift of the Maud Pie, Rare Find appears skating on a Manehattan ice rink with a different cutie mark. In A Hearth's Warming Tail, he appears caroling on a field in Ponyville with other carolers and later attends the Hearth's Warming celebration inside the Castle of Friendship. In Spice Up Your Life, he appears in Canterlot as Pinkie Pie and Saffron Masala advertise the Tasty Treat during It's Gonna Work. In The Cart Before the Ponies, he makes a background appearance spectating the Applewood Derby during Derby Racers. In 28 Pranks Later, he appears at Sugarcube Corner with other ponies informing Pinkie Pie of Rainbow Dash's excessive pranking spree. In Buckball Season, he appears in the stadium audience for the buckball competition in Appleloosa between Ponyville and Appleloosa. In The Fault in Our Cutie Marks, he appears watching Gabby play baseball during Find the Purpose in Your Life

In Parental Glideance, Rare Find makes a background appearance spectating a Wonderbolts performance in Canterlot. In Fame and Misfortune, he has soup outdoors in Ponyville and shrugs when the bowl is replaced by an ice cream sundae thrown by Coconut Cream during her food fight with Toola Roola. In Triple Threat, he makes a background appearance attending the Flame of Friendship ceremony for Ember and Thorax.

In Sparkle's Seven, Rare Find appears in Applejack's imagination sequence cheering for Apple Chord's performance in a large theater. In Common Ground, he makes cameo appearances in Appleloosa in a movie theater and visiting the Buckball Hall of Fame with Golden Harvest. In Between Dark and Dawn, he makes a background appearance watching a pony version of the musical Wicked. In The Last Problem, he makes a background appearance in Canterlot with Lemon Hearts during preparations for Twilight Sparkle's coronation.

In My Little Pony The Movie, Rare Find makes a background appearance behind a stall at the Friendship Festival during We Got This Together.

In Triple Pony Dare Ya, Rare Find appears in line for Granny Smith's Hearth's Warming fruitcake at the Ponyville marketplace.

Rare Find is a character in Gameloft's mobile game. The game's description of him states, "This stallion is known for his big lucky streak! Why, he found 20 bits on the road early this week!"

In Enterplay's collectible card game, Rare Find is named on his own cards α #59 R and α #ƒ23, which list the quote "Never tell me the odds." In the game's expansion set Absolute Discord, he is shown on card #179 U, Friend or Foe? 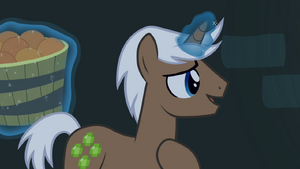