For the Equestria Girls: Choose Your Own Ending short, see Rarity Investigates: The Case of the Bedazzled Boot.

Rarity Investigates! is the fifteenth episode of the fifth season of My Little Pony Friendship is Magic and the one hundred and sixth episode overall.

In this parody of film noir, Rarity tries to prove Rainbow Dash innocent when she is accused of committing a crime.

The trumpet solos in the episode's musical score were provided by William Anderson.[1]

M.A. Larson attributes his story credit to writing an episode for the show called "The Rainbow Confession" which was ultimately turned into this episode. It was to have been more of a parody of Legally Blonde with Rarity in the Elle Woods role.[3]

The scene when Rarity and Rainbow Dash interrogate the Royal guards reappears in A-Dressing Memories.

Rainbow Dash enters the boutique and, after briefly toppling all the dress stands, mentions that she will be attending Princess Celestia's royal garden opening the next day. The Wonderbolts will be giving an aerial performance at the opening, and Rainbow Dash, being a member of the Wonderbolts Reserve, is a backup flyer in case one of the Wonderbolts cannot perform. In addition, both she and Rarity are attending a royal dinner at the castle that evening, where Rainbow is excited to hang out with the Wonderbolts personally.

That night, at the castle dinner, Rarity and Rainbow Dash meet retired Wonderbolt veteran Wind Rider. Rarity picks up on his particular scent of cologne, and Rainbow Dash is starstruck to meet such a decorated flyer. When Spitfire approaches and praises Rainbow Dash's flying, mentioning that she could eventually beat Wind Rider's long-distance speed record, Wind Rider suddenly excuses himself.

Rainbow Dash is disappointed that she might not be able to perform with her heroes, but Rarity offers to watch the performance with her. Later on, Rainbow retires to her suite in the castle's east tower.

The next day, the Wonderbolts practice for their aerial performance, but Spitfire has been unexpectedly called away by a note sent from her sick mother. Soarin offers Rainbow Dash to take Spitfire's place, and Rainbow eagerly accepts. As Rarity watches, Spitfire's mother Stormy Flare appears to watch as well, perfectly healthy. She reveals to Rarity that she never sent a note to Spitfire.

This causes confusion among the Wonderbolts until Wind Rider suggests someone sent Spitfire a fake note to remove her from the performance, causing all suspicion to fall upon Rainbow Dash. Though Rainbow is open about her desire to fly with Wind Rider, she pleads innocence. After a brief discussion, Soarin gives Rainbow a chance to prove her innocence, but if she cannot, she will be kicked out of the Wonderbolts.

Inspired by the literary works of Shadow Spade, "Detective Rarity" steps in to investigate the crime.

In a black-and-white parody of 1940s film noir, Rarity and Rainbow Dash inspect Spitfire's castle suite. Rarity discovers a piece of Rainbow's mane on the envelope that the note was sent in, and she finds that some of the corridor curtains have been moved.

Reasoning that whoever delivered the note to Spitfire had to have passed the royal guards on duty, Rarity and Rainbow Dash interrogate them. After some pressing—and through Rarity's feminine charms—the guards eventually admit that they took a short break when someone left them a very specialized cake. Rarity and Rainbow track the cake's origin to a Canterlot cake shop. The owner Cinnamon Chai tells Rarity that whoever purchased the cake had concealed their identity, except for having a deep, raspy voice and wearing a scarf that got stained in chocolate.

Rainbow Dash becomes increasingly worried when all the clues point to her and frustrated by Rarity's constant diversions to talk about fashion, but Rarity is confident her investigation is leading them toward the true culprit.

Back at the performance grounds, the Wonderbolts have yet to locate Spitfire. When Rarity and Rainbow Dash return, Rarity accuses Wind Rider of framing Rainbow for Spitfire's disappearance. Rarity's accusation appalls Rainbow, but Rarity explains her case:

In the face of this overwhelming evidence, Wind Rider confesses to sending Spitfire the fake note, saying he did it to preserve his long-distance speed record. He states that sometimes playing dirty is necessary to win, but Soarin and the rest of the Wonderbolts disagree and scorn him. Upon learning where Wind Rider sent Spitfire, Rainbow quickly flies off to retrieve her in time for the performance. Upon their arrival, Spitfire dishonorably discharges Wind Rider from the Wonderbolts for his crimes, and Rainbow Dash takes his place in the show.

The episode ends with the Wonderbolts giving their aerial performance while Rarity and Stormy Flare watch from the stands.

Rarity: Oh Sassy Saddles, don't you just love my new Femme Mystique Chic line of gowns?
Sassy Saddles: [gasps] Sequins and sashes, Rarity, they're exquisite! Where in Equestria did you find the inspiration?
Rarity: Oh, I modeled them after the adventures of Shadow Spade. Her stories are always full of mystery, suspense, and best of all, fabulous costumes!

Rainbow Dash: [hushed] Rarity! Don't you know who this is?!
Rarity: A gentlepony with fabulous taste in colognes and scarves?

Rainbow Dash: I was asleep at midnight... having this totally amazing dream. There I was at the arena flying with Wind Rider and the Wonderbolts, like I've always wanted to—
[camera flashes]
Rainbow Dash: —ah, eh, never mind. Not helping.

Rainbow Dash: But how am I gonna prove I didn't send a letter that I didn't send?!
Rarity: With me! Detective Rarity is on the case, and we are going to get to the bottom of this faster than my costume change!

Rarity: [narrating] Rainbow Dash was getting antsy, but I had faith I could clear her name and find the real culprit.
Rainbow Dash: What are you doing?
Rarity: [stammers] Uh, just thinking thoughts. [narrating] Rainbow Dash was right. In order to solve the mystery, we had to be focused. Driven. One hundred percent in the— [normally] Ooh! The damask pattern on these curtains is exquisite! Oh, and this velvet rope-holder – oh, it's just—
Rainbow Dash: We don't have time to look at the décor!

Rarity: [narrating] Rainbow Dash was questioning my methods. But I knew what I was doing.
Rainbow Dash: Do you?
Rarity: Oh, oh, oh. Did I say that one out loud?

Wind Rider: Ah, fine! You caught me! I did it!
Rainbow Dash: But why, Wind Rider?! Was it because I took the last broccoli at the dinner and you really, really wanted it?

Rarity: [narrating] So my friend got her moment in the sun. Or the center of an aerial flower, as the case may be. And as for me? I got a chance to show off my Femme Mystique Chic collection!
Stormy Flare: That's nice, dear.
Rarity: Oh, did I say that out loud? 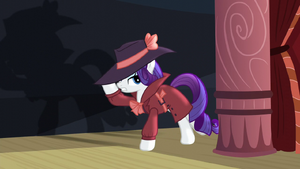