Rarity Takes Manehattan is the eighth episode of the fourth season of My Little Pony Friendship is Magic and the seventy-third episode overall. In this episode, Rarity gets into a fashion show competition in Manehattan against another designer. The name is either a reference to the 1984 movie, The Muppets Take Manhattan, or to Leonard Cohen's song "First We Take Manhattan", which specifically refers to the fashion industry; the name is not a reference to the 1989 slasher film Jason Takes Manhattan.[3]

The title of the episode was previously revealed on Amazon in early October 2013 as the title of an upcoming June 3, 2014 24-page panorama sticker storybook[4] before its name was replaced with "New Episode 2014" on the Amazon listing[5] in late October 2013.[6]

The pony to whom Rarity gives her scarf during the song is voiced by songwriter Daniel Ingram.[8]

The scenes when the Mane Six and Spike arrive at Manehattan, including the song Generosity, and the scene when Rarity gets the Mane Six overworked reappear in A-Dressing Memories.

At the train station, the Mane Six and Spike are about to board the train to Manehattan, with Rarity excited about Fashion Week and her friends tagging along to support her. Rarity is so pleased that her friends will be there with her that, as a token of her appreciation, she gives them tickets to see Hinny of the Hills, the most popular musical on Bridleway.

When the seven friends reach the bustling metropolis, Rarity mentions to her friends that she was able to get tickets to a sold-out musical by doing something nice for the musical's costume designer.

Rarity is so excited about being in Manehattan that she can't help but sing about it. During the song, she shows generosity to a hotel bellhop, a grumpy stallion in a fedora, and a cabbie pony. Later, Rarity's friends ask if there's anything else they can do. Rarity states that all that's left is for her to check in at the Fashion Week runway plaza by 2:00pm. A quick glance at a clock tower indicates that it's now 1:50pm.

As rain starts to fall, a now panicked Rarity tries to hail a taxi. However, there's a long line of ponies all waiting for taxis as well, and none are generous enough to allow Rarity to cut in front. Just then, the cabbie that Rarity had shown generosity to earlier pulls up to give Rarity a lift to the plaza. Her friends soon follow once they realize Rarity had forgotten her dresses.

Rarity enters the plaza to check in for Fashion Week, but discovers she'd forgotten her dresses. As she despairs, the hotel bellhop from earlier wheels her dresses in. After giving another huge tip to the bellhop, Rarity joins her fellow designers onstage just as Prim Hemline, the host and judge of Fashion Week, enters to greet them. She briefly chews out Rarity for arriving only seconds before being late and tells her she'll be displaying her designs last.

Prim dismisses her and the other designers, and Rarity is greeted by an old acquaintance, Suri Polomare, who's also competing in Fashion Week. She offers Rarity help by moving her dresses backstage and marvels at the dresses' fabric. Mentioning that her own dresses need a little touching-up, Suri asks Rarity for a swatch of the fabric, which Rarity is more than happy to give.

The next day, when Rarity checks in at the plaza for her run-through with Prim, she discovers that Suri has created an entire line of dresses with Rarity's fabric and passing it off as her own. When Rarity confronts her, Suri—after putting down her assistant Coco Pommel—callously remarks that "it's everypony for herself in the big city." Rarity gallops out of the plaza in tears.

Twilight Sparkle and the other ponies return to their Manehattan hotel room after an afternoon of fun, still looking forward to the rest of the day ahead of them, including Hinny of the Hills. When Rarity enters the room in tears, Rainbow Dash asks what's wrong, and Rarity dramatically bawls over how much her generosity backfired on her. Naturally, her friends are all more than willing to help her through her dilemma. Rarity looks at the fabric in the hotel room all around her and is struck by inspiration.

The ponies thus spend hours sewing and putting together Rarity's new fashion line, and looking quite unhappy doing it. Having already missed their salon appointment and restaurant reservations, the ponies remind Rarity of their plans to see Hinny of the Hills, causing Rarity to snap at them. The ponies feel guilty about "abandoning" their friend before quietly going back to sewing. When the dresses are finally finished the next morning, Rarity takes them and heads for the plaza without bothering to thank her friends for their help.

At the Fashion Week show, the crowd cheers for Suri Polomare, and Prim Hemline commends her for her unique fabric. As Suri walks offstage and taunts Rarity, Prim presents Rarity's new line, which grabs the crowd's attention in an instant. Rarity is excited that she might actually win, but she notices that her friends are not in the audience and is stricken with remorse over how poorly she'd treated them.

As Prim expresses her approval over Rarity's dresses, Rarity's eyes flicker with a rainbow-colored aura. She suddenly races out of the plaza and toward the hotel looking for her friends, but the bellhop informs her that they've already left. Thinking they've gone back to Ponyville, Rarity dejectedly walks through a rainy Manehattan, singing about her sorrows.

Rarity returns to the plaza to thank Prim Hemline for her time, but Suri Polomare enters, saying that Prim is furious. Twilight and the ponies then enter; they apologize to Rarity for missing her show because they overslept, and state that they were informed by Suri that Rarity lost. Rarity doesn't care that she lost and apologizes to her friends for how she treated them, and she arranges for the seven of them to see an exclusive showing of Hinny of the Hills.

The magic of generosity

As the musical comes to a close, Rarity tells her friends that she was able to arrange an exclusive performance for them by agreeing to make the dresses for the costume designer's next show. When her friends realize this means Rarity will be away from Ponyville for some time, they express sadness but are otherwise happy for her.

At that moment, Suri Polomare's assistant Coco Pommel enters the theater. She presents Rarity with the Fashion Week trophy, revealing to her that she had indeed won. Coco explains that Suri lied to Rarity and her friends about her losing in the hope that she would win by default after Rarity's "forfeit". Coco herself had gone along with the ruse until she saw the generosity shown between Rarity and her friends, and thus quit her job as Suri's assistant. As a token of gratitude, Coco presents Rarity with a small gift. In return, Rarity gives Coco her position of making dresses for her costume designer friend's next show.

Rarity and her friends wave goodbye to Coco Pommel at the train station and return to Ponyville. Later, at Carousel Boutique, Rarity writes down the lesson she learned in the friendship journal before opening Coco's parting gift: a spool of rainbow-colored thread. She puts it on her shelf with six other spools that match the Mane Six's coat colors. The rainbow thread then emits a strange glow.

Pinkie Pie: This trip is fun already! I love jumping up and down!

Applejack: [about Rainbow Dash] Normally she doesn't even like musicals.
Rainbow Dash: I know. Ponies just bursting into song in random places at the drop of a hat? Who does that?!

Rarity: There's nothing left for me to do but check in at the runway with my dresses by two this afternoon.
Pinkie Pie: Oh, that's funny. Because that clock over there makes it seem like that's only ten minutes from now!

Rarity: Fashion runway plaza in seven minutes. Can you make it?
Cabbie: Hang on!
Rarity: Ta-ta!

Rarity: I gave you the fabric for accents! Not for your whole line! And how could you possibly make all of those outfits out of it so fast?!
Suri Polomare: Fast? Hah! Coco Pommel here took practically forever. Nearly got me completely disqualified.
Coco Pommel: Well, I wanted to make sure you'd win, so I took the extra time to--
Suri Polomare: Quiet! I pay an assistant to sew and get coffee, not talk. 'Kay?

Suri Polomare: [To Coco Pommel] Now get me some coffee!

Twilight Sparkle: Oh, my gosh, what a great afternoon! That was almost too much fun!
Rainbow Dash: Better pace yourself, 'cause the rest of the day is jam-packed!
Applejack: First there's the salon appointment to get our manes done.
Pinkie Pie: Then our fancy dinner at the Far-Afield Tavern!
Fluttershy: And after that...
Main cast sans Spike: Hinny of the Hills! [laughing]

Rarity: Oh! I see! I go out of my way to get you tickets for a show, and this is how you repay me? By abandoning me in my hour of need? Oh, oh, oh! Fine! Go and see Hinny of the Hills tonight! And then tomorrow morning when you come to see my fashion show without any fashion to show, you can have more entertainment! "Oh, why look, there's our friend Rarity going down in flames! Isn't friendship magic?!"
Twilight Sparkle: Rarity, calm down. What's gotten into you?
Rarity: What's gotten into you?! Oh, go ahead! See your little show! Congratu-pony-lations, fillies! Sounds like you've all figured out already it's everypony for herself in this town!

Applejack: [to Rarity] Yeah, you were pretty rotten.
Rainbow Dash: Wow, Applejack. I know your thing is honesty but come on!

Rarity: Manehattan was simply grand. It was in this magnificent metropolis that I learned that while there are ponies who will take advantage of your generosity, you should never ever let that cause you to abandon your generous spirit. Nothing feels worse than taking advantage of the giving nature of your friends. 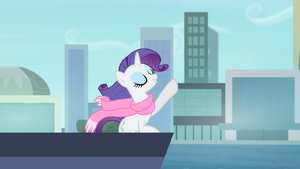