Why's the Doctor taking the train? Is his TARDIS broken or something?

Rarity gets to travel a lot, doesn't she?

With loads of luggage in tow too!

Could you be a dear, and move my other stuff too please?

Ooh, anything for you Rarity.

Ooh, I can't wait until we get there!

Rarity's friends gather around her eagerly.

There's no doubt you're going to win, Rarity.

Rarity with her friends.

Staring at the tickets.

These tickets are for a show, that you'll simply adore.

This is my happy face. Deal with it.

Aw Rarity, you didn't have to your generosity is too much to handle.

The ponies cheer, while poor Spike gathers their luggage.

Jumping for joy.
Add a photo to this gallery

The Mane Six and Spike walking out of the train station.

A mare sitting down in a taxi car.

The friends, taking a look around Manehattan.

They say the neon lights are bright on Bridleway...

Applejack, looking up at Rainbow Dash.
Add a photo to this gallery

"I know. Ponies just bursting into song in random places at the drop of a hat?"

Rarity does. And I can think of one more who came with you!

And she's singing excitedly, too.

"Such a huge, bustling community!"

Everyone's got things to do, places to go..

Some are stern. Some just regular. Some happy. Some flying.

Rarity taking a look around.

And poor Spike is carrying her things, again.

Spike, carrying all of Rarity's luggage.

Oh Spike, Rarity would never forget you on purpose.

Well, that was unexpected in the big city.

A Chaos Emerald for your troubles?

I'm here to give you all my generosity.

This gentlecolt was here first; I should let him have a look.

You poor dear. Please, take my scarf. It will keep you warm.

There you go, kind sir.

Don and Peggy, what are you doing in My Little Pony?

Joan and Roger, too? You guys should be in Mad Mares.

I was a cutie mark once. It was awful.

Rarity should have been watching where she was going.

Grumpy Cat is grumpy. Deal with it.

Now she got her weapon handy.

Another one? Geez, Rarity, how many Chaos Emeralds do you have?

Flower vs. Grumpy Cat, who wins?

The Smile Patrol does it again by only putting a flower on his hat.

Rarity to the rescue.

I'll fix this up in a jiffy.

The ponies, waving to the taxi driver and the passenger.

Rarity, dancing from a pole.

New York, New York!
Add a photo to this gallery

Time is running out

Dashie on top of a cab.

Maybe you guys should take a bus.

Impossible to get a taxi, yep this is definitely New York for us humans.

No I will not give you a cab Princess Twilight, even if you are royalty.

Looks like Spike was able to get his carrot-dog after all!

"Anypony else get the sneaking suspicion that we forgot something?"

Her dresses!!
Add a photo to this gallery

Checking in for Fashion Week

How could I possibly forget them?!

Your friends told me you needed these in a hurry

Anything for that nice mare

And a tip in exchange.

"Dismissed."
Add a photo to this gallery

Rarity, is that you?

"Don't you remember me?"

We haven't seen each other in years.

Because I moved here...

Wait a minute! There's something interesting about those dress covers!

Rarity at the counter.

"Did you make that yourself?"

"You stole my fabric!"

I didn't steal it.

You gave it to me, 'member?

You should know stealing some pony's fashions is wrong.

I wanted you to win, but don't you think stealing Rarity's designs is wrong?

"Now get me some coffee!"

Hey, Rainbow Dash, you look so cool in a cap!

Didn't know Manehattan has a salon to get our manes done.

And most importantly, a musical show called...

Hinny of the Hills

Now THAT'S the Element of Laughter!

I let one of the other contestants use some of my one-of-a-kind fabric...

...and then she turned it into a wardrobe just like mine...

...only now it looks like I'm the one copying her!

"my generosity has ruined me!"

Rarity rubs on a blanket.

Oh God, it's DRESS.MOV all over again!

I thought Fluttershy had a freaky knowledge of sewing.

This is fashion we are talking about.

We want a break.

Oh, or maybe you don't like staying up all night working thanklessly on dresses your friend designed?

Well now you all know how I felt!

Rarity has lost her mind.

Again with the covers! And it looks like Spike wasn't very much help (but can we blame him?).

You're welcome, you ungrateful slave-driver!
Add a photo to this gallery

Presentation of the dresses

One of those four ponies almost looks like Scootaloo!

And one of these ponies looks like Babs Seed!

"They're liking it! I think I may have just won this thing!"

"I can't wait to celebrate this with..."

Rarity has left the building!

"This is unheard of!"

I wish I hadn't been so hard on my gal friends.

"And now alone I stand."
Add a photo to this gallery

Rarity, we were looking for you.

Suri told us you lost.

"Yeah, you were pretty rotten."

We wouldn't want that fashion-loving unicorn to know the truth, would we?

"and i'm a dancing ponnnnny"

Thank you, thank you.

This is the first place trophy for fashion week...

But I thought I lost!

You didn't. You won.

Suri lied to you and she thought if she could use your fashion idea the judges would give her first place.

she did it to make you and your friends go away.

And now, the second thing...

This has got to be foreshadowing something... or the key of generosity!
Add a photo to this gallery 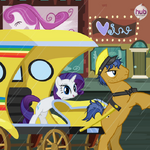 Rarity enjoying the sights of Manehattan.

Not the best at first impressions. 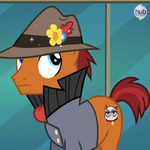 Grumpy Cat, what are you doing in Manehattan?
Add a photo to this gallery
Retrieved from "https://mlp.fandom.com/wiki/Rarity_Takes_Manehattan/Gallery?oldid=2012319"
Community content is available under CC-BY-SA unless otherwise noted.