Raven Inkwell, or simply Raven, is a female pony who appears as both an Earth pony and a unicorn. She has a white coat, a dark brown mane, lighter brown eyes, and a cutie mark of an ink pen and inkwell. She is unnamed in the show, but she is named in merchandise and other media.

Raven Inkwell first appears throughout the season two episode Luna Eclipsed as an Earth pony. She dresses as a devil for Nightmare Night. Raven is among the numerous other ponies that cower in fear of Princess Luna; in one such scene, she lets out an audible gasp.

Raven later appears as a unicorn at the beginning of the season three episode The Crystal Empire - Part 1, where she serves as an aide to Princess Celestia. She walks off-screen as a royal guard enters the throne room to inform Celestia of the return of the Crystal Empire.

Raven appears as an Earth pony again in the season four episode Filli Vanilli. Here, she is standing in Ponyville's town hall, facing Mayor Mare and holding a clipboard.

Raven appears as an Earth pony yet again in the season six episode Spice Up Your Life, standing in Canterlot's Restaurant Row.

Raven Inkwell makes several appearances in IDW Publishing's comic series, usually as a unicorn. Her cutie mark appears slightly different in some panels than in the series: the ink pen is instead a quill.

In My Little Pony: Friendship is Magic Issue #7, Raven appears on page 1, once again as Princess Celestia's aide.

In My Little Pony: Friends Forever Issue #3, Raven appears on pages 1, 2, 4, and 22. On the first three of these four pages, Raven has speaking lines, and Princess Celestia refers to her as Raven.

In the My Little Pony: Friendship is Magic Issue #61-62 story Convocation of the Creatures!, Raven—as an Earth pony for the first panel she appears in, as a unicorn for the rest of the time; referred to as Raven throughout—serves as an archivist during the convocation ceremonies. During the story, she mentions to Twilight Sparkle that she often has to handle the aftermath of her and her friends' adventures from "behind the scenes", such as writing up the peace treaty between the ponies and buffalo of Appleloosa.

Raven Inkwell is an Earth pony character in Gameloft's mobile game, and has a story role referred to as Raven in the "Convocation of the Creatures!" event. She is also a boss battle helper during the "Rarity's Retro Revolution" event, and an enemy minion during "The Crowning Achievement" and "The Pinkie Parents Problem" events. The game's description of her states, "As one of Celestia's ablest aides, she's overseen shindigs from balls to parades."

Raven is shown as an Earth pony on the season 3 poster and German DVD set cover.

In the Enterplay collectible card game's expansion set The Crystal Games, Raven is named on her own card #54 C, which features her as a unicorn and attributes to Princess Celestia the quote "Raven is one of my most trusted aides. Any endeavor she oversees meets, and often exceeds, my expectations."

Raven was shown as a unicorn on Acidfree's first art print, but was removed when Shining Armor displaced her in order for DJ Pon-3 to be added.[5]

"That's the end of the list, Your Majesty."
— Friends Forever Issue #3 page 1

"Your Majesty, are you sure about this? I can handle affairs until Princess Luna takes over at sunset, but..."
— Friends Forever Issue #3 page 4 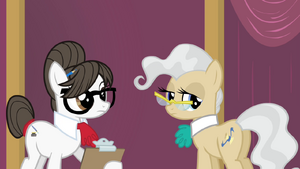