My Little Pony Friendship is Magic Wiki
Register
Don't have an account?
Sign In
Advertisement
in: Season 2 episodes, Recognized for awards
English

Read It and Weep is the sixteenth episode of the second season of My Little Pony Friendship is Magic and the forty-second episode overall. While Rainbow Dash is stuck in the hospital with an injured wing, she discovers the joy of reading but hides it from her friends due to her former penchant of mocking it as an "egghead" pursuit.

The episode was storyboarded by Raven M. Molisee and Dave Wiebe. Molisee stated that the working title for the episode was "Reading Rainbow", which is the name of the classic PBS children's educational television series.[2]

Writer Cindy Morrow said that the episode had other suggested working titles besides "Reading Rainbow", such as "A Dash of Fiction", "Speed Reader",[3] "A Need for Read", "Book Before You Leap", and "Every Trick in the Book".[4] She also referred to the episode as "Read'em and Weep".[3]

This episode was nominated for a 2012 Leo Award for "Best Overall Sound in an Animation Program or Series".[5]

The scene when Rainbow Dash admits her love for Daring Do to Twilight reappears in Deep Tissue Memories.

The episode begins with Rarity and Pinkie Pie watching something zip about in the sky. Twilight Sparkle joins them and asks what they're looking at. Pinkie tells her that they're watching Rainbow Dash, who's performing a series of aerial stunts. Rarity and Pinkie remark how dazzling Rainbow Dash is, and the three watch her in admiration. However, something appears to go wrong, and the ponies watch in horror as Dash plummets to the ground.

Rainbow Dash regains consciousness in a hospital bed with her friends standing around her. She finds that her right wing is bandaged and groans. Doctor Horse tells Twilight that Rainbow Dash is going to be fine, but that she will need to be in the hospital for a few days, to which Dash voices her frustration. Her friends try to cheer her up, but Dash can only sulk under the bed sheets.

Twilight notices a nurse walking by with a cart of books and brings one, Daring Do and the Quest for the Sapphire Stone, over to Dash. Rainbow Dash immediately and rudely tosses the book away, saying that reading is "for eggheads" and "uncool". Her friends chuckle at her view of reading, saying that everyone enjoys reading from time to time. The nurse walks in and tells the ponies that they'll have to come back tomorrow. Just before leaving, Twilight tells Rainbow Dash that she'd like Daring Do and the two of them are a lot alike.

Following a shot of a clock on the wall showing that it's one o'clock, Rainbow Dash makes several attempts to pass the time—bouncing a ball off the wall, having her lunch (getting a glass briefly stuck on her muzzle), turning her bedside lamp on and off, and telling jokes to her silent and immobile roommate. A bored-looking Rainbow Dash glances up to the clock and groans loudly as it turns to one minute past one.

Rainbow Dash looks to the book on her nightstand. She refuses to pick it up at first, but after a couple more reluctant peeks, she sighs in surrender and picks it up to start reading. As she reads, Dash finds herself instantly identifying with the main character, who also has an injured wing.

Rainbow Dash continues reading the book aloud, and the scene fades to the events told within, where Daring Do, a brown-coated, grey-maned Pegasus with the same mane style as Rainbow Dash herself, makes her way through a tropical jungle and finds herself surrounded by a tiger, a black panther, a lynx, a cheetah, and a white house cat. Daring flees from the wildcats and uses a vine to swing across a chasm. Rainbow Dash's narration returns, and she reads that Daring Do finds herself in front of the ancient temple that she'd been seeking.

The scene cuts back to Rainbow Dash, who comes to grips with the fact that she loves the book (and reading) and that she is now an egghead.

Following another passage of the book, in which Daring Do braves the ancient temple's numerous traps and pitfalls, a knock at the door interrupts Rainbow Dash. She quickly hides the book under the covers as Twilight and Fluttershy enter the room. They come to help Rainbow Dash with her boredom with a Battleship-style game, which Dash purposely loses and quickly puts away. Before the two can question Dash's odd behavior, she chases them out with the pretense of trying to sleep. When they leave, Dash retrieves the book and continues reading.

Daring Do makes her way past more obstacles and comes to the Sapphire Stone. After briefly surveying the area around it, she picks it up and tucks it under her hat. This sets off a trap that causes the chamber to start collapsing and filling with lava. Daring Do jumps from the collapsing pillars and escapes the chamber through a skylight, but a gust of air from the chamber blasts her clear into the jungle, where she falls right at the feet of a strange dog-like creature. The creature cheerfully says "hello, Rainbow Dash" with Pinkie Pie's voice, and the story shifts back to Rainbow Dash's hospital room.

Pinkie Pie, Applejack, and Rarity enter the room and inquire about Dash's well being. Nurse Snowheart then enters with Dash's dinner, which Dash eats messily, and her friends bid an awkward goodbye and leave the room in disgust. Rainbow Dash spits out the food and picks up the book again.

The dog-like creature named Ahuizotl captures Daring Do and ties her to a stone table in another booby-trapped room, then sets off the traps and leaves. Spiked walls start closing in, spiders crawl over the spikes, cobras emerge from the mouth of an ornament on the wall, and quicksand starts filling the room. The story is once again interrupted, this time by Doctor Horse—who informs her that she's to be discharged from the hospital, and the nurses hastily wheel her out the front door before she can finish the book.

Getting the book back

Rainbow Dash returns to the room she was staying in and sees a new patient occupying the bed. Underneath the bed, she finds the book. She continues reading immediately, but she ends up waking the patient and alerting the hospital staff. As Rainbow Dash makes her getaway, her wing cramps up mid-flight and she crashes, causing her to lose the book. Before she can recover it, the hospital staff chase her out of the hospital and through Ponyville.

The noisy pursuit wakes Rainbow Dash's friends from their sleep, and all parties meet in front of the Golden Oak Library. When asked what's going on, Dash admits to being an egghead and explains that she liked the book Twilight gave her, and she tried stealing it from the hospital so she could finish reading it. Understanding of her plight, Dash's friends tell her she didn't need to make a ruckus—or, as Pinkie puts it, a fracas—over a book.

Twilight lets Rainbow Dash borrow her copy of the book, and Rainbow apologizes for everything that's happened. Twilight explains that reading is something everyone can enjoy if they give it a try, and Rainbow Dash learns not to knock something until she's tried it.

The scene shifts back to the Daring Do story. Overcome by the quicksand, Daring Do flings her hat off of her hoof; it bounces off the walls and ceiling before hitting the trap lever to its original position. The walls and the quicksand recede, and a door opens leading outside. The scene cuts to Ahuizotl petting the white house-cat and gloating over his victory. Suddenly, Daring Do swings down from a vine and snatches the Sapphire Statue right out of his hand. As Ahuizotl weeps over his defeat, Daring Do gallops off.

Rainbow Dash finishes reading the book in her bedroom and delightedly picks up another book, Daring Do and the Griffon's Goblet.

Applejack: Is she gonna be okay?
Fluttershy: Oh, I'm so worried!
Pinkie Pie: Is her face gonna stay that way?

Rainbow Dash: You guys have gotta get me out of here! I'm gonna climb the walls!
Pinkie Pie: Ooh, just like a spider! [to Doctor Horse] Did the crash somehow give her super-duper spider powers?

Rainbow Dash: I so don't read. I'm a world-class athlete. Reading's for eggheads like you, Twilight. Heh, no offense, but I am not reading. It's undeniably, unquestionably, uncool.

Daring Do: You won't get away with this, Ahuizotl!
Ahuizotl: But I already have.

Doctor Horse: [chuckles] I think I know what the trouble is. A severe case of lazy-itis.

Screwy: [barking]
Night Watch: Hey, get back to the hospital!

Twilight Sparkle: Wow! I knew the book was good, but I didn't know it could drive a pony to petty theft!
Rainbow Dash: Good? Try awesomely amazing. That book is undeniably, unquestionably, un-put-down-able!

Applejack: There's no reason to go around causin' a ruckus—
Pinkie Pie: Fracas!
Applejack: ...causin' a fracas just because you like to read.

Daring Do: Another day, another dungeon! 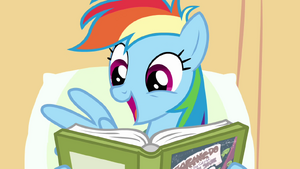 Read It and Weep image gallery