My Little Pony Friendship is Magic Wiki
Register
Don't have an account?
Sign In
Advertisement
in: Pages for merging, Pages that need improvement, Earth ponies,
and 4 more
English

Red Delicious is a background Earth pony and a member of the Apple family. He has a light yellow coat, a blue mane, blue eyes, and a cutie mark of a large red apple.

Red Delicious first appears in Friendship is Magic, part 1, when Applejack introduces Twilight Sparkle and Spike to him during the Apple family reunion.

Red Delicious doesn't appear again until Apple Family Reunion, in which he attends the eponymous reunion with other Apple family members and warmly greets Hayseed Turnip Truck. He takes part in the raising of the new barn at Sweet Apple Acres during Raise This Barn and appears in the family photo. He appears briefly during I've Got to Find a Way in Magical Mystery Cure.

In Three's A Crowd, an otherwise unidentified stallion whose muzzle shape and coat and eye colors match Red Delicious, Goldengrape, "Fuzzy Slippers", S01E21 Unnamed Earth Stallion #10, S05E06 Unnamed Earth Stallion #9, and "Harry Trotter" equally makes a brief appearance as a security team member during Glass of Water. A pony otherwise identical to both Red Delicious and Goldengrape with a cutie mark different from both of theirs appears during The Super Duper Party Pony in Pinkie Pride and during The rappin' Hist'ry of the Wonderbolts in Testing Testing 1, 2, 3.

In Bloom & Gloom, Red Delicious appears among other ponies in the first part of Apple Bloom's nightmare fleeing from a swarm of twittermites.

Red Delicious appears in My Little Pony The Movie during We Got This Together, as one of the ponies captured by the Storm Creatures, and during Rainbow.

On My Little Pony: Friendship is Magic Issue #85 page 4, Red Delicious appears in Applejack's flashback. In My Little Pony/Transformers Issue #4, he is summoned to Sweet Apple Acres by Discord to help Applejack drive the Insecticons off the farm.

Red Delicious is a playable character in Gameloft's mobile game, added in the version 2.0 update on October 6, 2014. His in-game description states "Red Delicious is a stallion with a talent for singing. Maybe his golden pipes stem from his Apple family ancestors!" 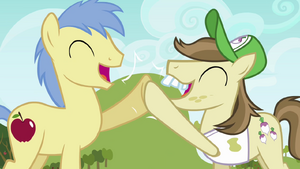