My Little Pony Friendship is Magic Wiki
Register
Don't have an account?
Sign In
Advertisement
in: Earth ponies, Male characters, Pages that need improvement,
and 3 more

Rivet is the placeholder name of a male pony who appears usually as an Earth pony and occasionally as a Pegasus. He has a light brown coat, brown mane and tail, and blue eyes. His cutie mark is a hammer and two nails in most appearances, is a shield in two appearances, and is three raindrops in one appearance. He has a speaking role in the episodes The Mysterious Mare Do Well, Equestria Games, and Made in Manehattan.

His beard stubble is sometimes not present, similarly to the beard stubble usually of Jack Hammer and the mustache rarely of Lucky Clover.

Rivet's cutie mark is frequently obscured by his clothing and/or equipment, usually his construction tool belt or his cabbie uniform's checkered band and his taxi's harness.

He, as well as Magnet Bolt, Cherry Spices, Electric Sky, and Barber Groomsby, was to appear in Boast Busters.[2]

Rivet first appears as a Pegasus pony with beard stubble in Sonic Rainboom. He is among several Cloudsdale construction workers who admires Rarity's wings when she passes by.

In Sisterhooves Social, Rivet appears as a clean-shaven Earth pony, pulling Hondo Flanks and Cookie Crumbles' taxi as they leave Carousel Boutique. In The Mysterious Mare Do Well, he once again appears as a construction worker, and he has his first spoken line when he is rescued by Mare Do Well. In Putting Your Hoof Down, Rivet is a Ponyville cabbie again, pulling Fluttershy's taxi. His last season two appearance is in Hurricane Fluttershy, as a flight camp instructor in Fluttershy's flashback.

Rivet later appears several times in Rarity Takes Manehattan as a Manehattan taxi cabbie. In Rainbow Falls, he appears as a Pegasus pony and one of the coaches for the Cloudsdale air relay team. In Pinkie Pride, he appears once as a police officer during The Super Duper Party Pony and later as a construction worker during Pinkie's Lament. In Somepony to Watch Over Me, he is a taxi cabbie again, pulling Granny Smith's taxi. In Equestria Games, Rivet is a security guard for the titular event and has his second speaking role in the series.

In Made in Manehattan, Rivet appears in Manehattan as both a crossing guard and a carriage puller and later as a lighter-coated worker, having his third speaking role.

In Grannies Gone Wild, Rivet appears as an Alicorn working as a balloon traffic director at Las Pegasus.

Rivet is an unobtainable and non-playable character in Gameloft's mobile game, which features him as a construction worker outfitted as in Sonic Rainboom, The Mysterious Mare Do Well, Pinkie Pride, and Made in Manehattan.

Enterplay collectible card game card α #139 U, Hard Hat, shows Rivet as a construction worker as in The Mysterious Mare Do Well.

"Actually, she saved all of us! We owe her our lives!"
— The Mysterious Mare Do Well

"[sighs] The Revival. Mhm, yeah. My pop used to bring me."
— Made in Manehattan 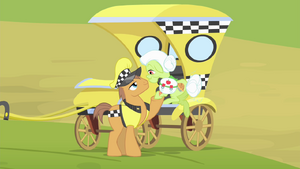