In this episode, Trixie is invited to bring her magic show to Saddle Arabia, and she can think of no one better to bring along than her great and powerful assistant Starlight Glimmer.

This episode was released on France's TFOU MAX on-demand service on August 15, 2018,[1] seventeen days ahead of its scheduled premiere on Discovery Family. It aired on Boomerang in Australia on August 18, 2018, and on Nickelodeon in Denmark, Norway and Sweden on August 20.[2]

When asked on Twitter in September 2018 about the absence of Saddle Arabia, supervising director Jim Miller replied, "Unfortunately, it would require a lot of time and effort to design and build the resources to see it properly" and that "it wasn’t in the script".[3]

The episode begins with Trixie putting on a magic show in Ponyville, with Starlight Glimmer serving as her stage assistant. Trixie greatly impresses the crowd of ponies with her disappearing act of escaping from a locked trunk. At the end of the show, Twilight Sparkle and Princess Cadance compliment Trixie on her illusions, as well as her and Starlight's on-stage chemistry, comparing Starlight and Trixie's relationship with their own.

As Starlight leaves to return to her job as guidance counselor at the School of Friendship, Trixie is approached by a Saddle Arabian unicorn named Hoo'Far, who also expresses his great approval for Trixie's magic act. He asks Trixie to perform her show in Saddle Arabia, but Trixie is unsure about traveling such a far distance, especially considering the poor condition of her traveling caravan.

In an effort to convince Trixie, Hoo'Far offers to trade his much more impressive-looking caravan for hers, but she refuses to part with her caravan for sentimental reasons. Thus, Hoo'Far resolves to follow Trixie on her magic tour and see as many of her shows as possible so that he can tell her fans about it when he returns home. Upon hearing that she has a lot of fans in Saddle Arabia, Trixie goes to the school to tell Starlight and invites her to come along on the trip, and Starlight eagerly accepts.

Off on the road to friendship

As Starlight and Trixie set out on their road trip to Saddle Arabia, Trixie notes that her caravan might be too small for the both of them and understands if Starlight wants to back out of the trip. However, Starlight is very excited to go on a trip with her best friend and mentions that there are plenty of inns to choose from on their way to Saddle Arabia. During their travels, they pass through such locations as Ghastly Gorge, the Flame Geyser Swamp, and a crocodile-infested bog, all while cheerfully singing the song We're Friendship Bound. Along the way, they run into Hoo'Far, who once again offers to trade his caravan for Trixie's.

After some time spent traveling, Starlight and Trixie stop in the desert village of Somnambula. The two start to get on each other's nerves when Starlight wastes some of their bits on street food and Trixie insists on waiting in a long line to buy haycakes and juice from a specific kiosk. After hours of waiting in line, they try to check in at the Get On Inn for the night, but there are no vacancies left by the time they reach the front desk. Upon finding that all of the inns in the area are full, Trixie briefly blames Starlight for not making a reservation but quickly apologizes for getting frustrated.

With nowhere to stay in the village, Starlight and Trixie are forced to spend the night in Trixie's cramped caravan. Their frustration grows further when Starlight keeps bumping her hooves against Trixie's boxes of magic supplies, she keeps Trixie awake with her loud snoring, and Trixie keeps Starlight awake by talking in her sleep. The next morning, Starlight and Trixie get on each other's nerves even more when Starlight eats all of the haycakes and Trixie drinks all of their juice. When they perform a magic show in the village square later that day, their increasing frustration with each other negatively impacts their performance.

The road to friendship splits

On the second night of their stay in Somnambula, Starlight and Trixie passive-aggressively air their grievances with one another during a campfire. Their frustration and anger toward each other eventually results in Trixie letting Starlight have the entire caravan to herself while she sleeps outside in the bushes so that they can each have their space. Hoo'Far overhears their loud arguing from his own caravan.

The next morning, Trixie awakens to discover her caravan is gone. When Starlight emerges from her good night's sleep in Hoo'Far's caravan, she reveals that she traded Trixie's caravan for his. Even though she kept all of her personal belongings and magic supplies in the exchange, Trixie breaks down in tears over losing her precious caravan, and Starlight accuses her of valuing her caravan more than their friendship. Trixie angrily berates Starlight for trading her caravan away and regrets inviting Starlight on the road trip, and Starlight decides to take Hoo'Far's caravan and return home to Ponyville.

As Trixie continues on to Saddle Arabia alone, dragging her luggage along with her, she once again runs into Hoo'Far, who has made himself at home in Trixie's old caravan. Trixie demands that Hoo'Far reverse their caravan trade, and she lies in the road to stop him from leaving unless he agrees. Meanwhile, Starlight has considerable difficulty pulling Hoo'Far's caravan back to Ponyville by herself, and she encounters a pair of mailponies who had similar disagreements earlier and were inspired by Starlight and Trixie's song to make amends.

Over the bump in the road

When Starlight catches up with Trixie and Hoo'Far, Starlight apologizes to Trixie for trading away something that wasn't hers to trade away in the first place, and she asks Hoo'Far for a trade reversal. Hoo'Far agrees to reverse the trade if Starlight and Trixie can demonstrate what good friends they are.

Starlight and Trixie attempt to convince Hoo'Far of this by performing their own, awkward version of Twilight and Cadance's "sunshine, sunshine, ladybugs awake" dance. Despite the clumsy and impromptu nature of Starlight and Trixie's friendship dance, Hoo'Far agrees to a reverse exchange of the caravans. However, he advises that they return to Ponyville instead of continuing on to Saddle Arabia in their exhausted condition.

Back in Ponyville, Starlight apologizes again for ruining their trip to Saddle Arabia, but Trixie remarks that even time spent on the road by herself can be irritating. Nonetheless, Starlight is glad that they made the attempt, and Trixie agrees, believing the experience made their friendship stronger than ever.

Twilight Sparkle: There's nothing better than a bond with another pony. You can share all kinds of things.
Twilight Sparkle and Princess Cadance: Sunshine, sunshine, ladybugs awake! Clap your hooves and do a little shake! [giggle]
Starlight Glimmer: I think we'll stick to the stage magic for now.
Trixie: The Great and Powerful Trixie doesn't chant.

Hoo'Far: If I cannot convince you to bring your tour to Saddle Arabia, I must be prepared to relate its magnificence to your many fans there.
Trixie: "Many fans", you say? [laughs] Well, I suppose I could consider the trip.

Starlight Glimmer: Thank goodness we're not like Twilight or the others. They'd probably sing a song about it.

Trixie: You said there'd be plenty of places to stay. "Don't even worry about it," you said. Ya might've thought to make a reservation!
Starlight Glimmer: Um, I've been with you singing and standing in line. When would I have done that?

Trixie: Your snoring is a bit, um...
Starlight Glimmer: Loud? [nervous laugh] Yeah, I do that. I had my village convinced we were being attacked by bears every night.

Starlight Glimmer: Do you suppose the Terrifying Trunk Escape is too much for a pony who drinks all the juice and talks non-stop in her sleep?! What if the Great and Powerful Trixie can't...
[poof]
Trixie: Sleep?! Because her roommate snores like an ursa major?!

Trixie: I'm so exhausted, I could sleep through a stampede of wild boars! Which, you'll be delighted to know, is only slightly louder than your snoring.
Starlight Glimmer: Well, I'm looking forward to rehearsing the act with you all night. So diligent of you to go over it and over it in your sleep.

Hoo'Far: It seems there is trouble on the road to friendship.
Starlight Glimmer: [derisive laugh] Ya think?!

Starlight Glimmer and Trixie: [out of sync] Magic, tra-magic... poof of smoke... Want to wave your hooves... and tell a... little joke!

Starlight Glimmer: I'm sorry your Saddle Arabian tour was ruined.
Trixie: Honestly, I don't think I could've stood one more second on the road. At a certain point, I don't even like traveling with myself. 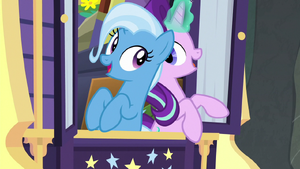