Rock Solid Friendship is the fourth episode of season seven of My Little Pony Friendship is Magic and the one hundred and forty-seventh overall.

In this episode, Maud Pie considers moving to Ponyville after graduating from geology school, and Pinkie Pie tries to help her see that the town has more to offer than just rocks.

According to Jim Miller, Starlight Glimmer's interest in kites in this episode was foreshadowed by the presence of kites in her bedroom in season six.[1]

For her performance as Pinkie Pie in this episode, Andrea Libman was nominated for a 2017 UBCP/ACTRA Award for Best Voice.[2]

A small part showing Pinkie delivering a pizza to Starlight and Maud reappears in Cakes for the Memories.

The episode opens during Maud Pie's graduation ceremony at the Equestrian Institute of Rockology, attended by Maud's parents Igneous Rock Pie and Cloudy Quartz and sisters Limestone, Marble, and Pinkie. After giving her very short "vale-rock-torian" speech, Maud receives her diploma from Professor Rusty Tenure, much to her parents' delight and Pinkie's utter excitement.

On the Friendship Express train, Pinkie Pie is thrilled to learn that Maud is considering moving to Ponyville now that she has graduated, already planning out the fun they will have together. Specifically, Maud is trying to decide between Ponyville and Ghastly Gorge, saying that it has to be a "rock-based decision". Thus, Pinkie is determined to show Maud that Ponyville has better rocks to study than Ghastly Gorge does.

On their first stop, Pinkie and Maud meet Rarity and Spike as they mine for gemstones in a crystal cave. Rarity explains that she's trying to find rare chartreuse gems for Coloratura's album release party. However, Maud effortlessly finds a vein of chartreuse, remarking that it and all the gems in the cave are fairly common.

Next, Pinkie takes Maud to the impressive Castle of Friendship. However, Maud is still unimpressed, saying that a lot of structures are built from rocks. Pinkie starts to get desperate for Maud to choose Ponyville over Ghastly Gorge until Maud admits that her decision is not entirely "rock-based". Having always studied rocks by herself, Maud also wants a friend to talk to besides her sister and pet Boulder.

"It isn't hard to meet somepony I like. It's finding somepony who gets me."
— Maud Pie

At that moment, Starlight Glimmer comes running out of the castle and bumps into Maud. Much to Pinkie's surprise, Starlight and Maud had met once before; while traveling Equestria for her rocktorate dissertation, Maud encountered Starlight back when she first founded her village. As Starlight leaves to run some errands, Pinkie encourages Maud to accompany and befriend her.

As Maud helps with Starlight's errands, the two find a little common ground about liking kites. However, Pinkie Pie serves as a constant, intrusive presence, trying to make them close friends as quickly as possible. As Starlight and Maud explore the crystal cave again and bond over rocks, they discover a secret waterfall grotto hidden behind a hollow wall of granite, piquing Maud's interest. Unfortunately, Pinkie continues to be a third wheel, using methods to push Starlight and Maud closer such as intentionally causing a cave-in. Maud makes a way out using Boulder, but Pinkie's constant meddling starts to annoy her.

That night, at Sugarcube Corner, Pinkie comes up with even more ways to make Maud and Starlight closer friends. Maud tries to talk to Pinkie about her pushiness, but Pinkie is so excited for her sister to move to Ponyville that she doesn't listen. The next morning, Maud has left, and Pinkie discovers her note saying she decided to move to Ghastly Gorge.

Pinkie informs Starlight Glimmer about Maud's departure and laments that the two couldn't become friends. Starlight tells Pinkie that she liked Maud, but her efforts to push them together did more harm than good. Meanwhile, Maud mines for rocks in Ghastly Gorge and discovers a piece of emerald jasper, unaware of the monstrous quarray eels that lurk nearby.

When Pinkie catches up with Maud, she saves her from being eaten by a quarray eel, and they escape the eel-infested canyon together. Pinkie apologizes to Maud for trying to force her and Starlight together and for underestimating her ability to make friends on her own. She begs Maud to give Ponyville another chance and promises to give her space, and Maud accepts.

Back in Ponyville, Starlight and Maud fly kites together, and Maud tells Starlight she has decided to move to Ponyville, having moved into the waterfall grotto they discovered in the crystal cave near town. Pinkie Pie expresses her elation over Maud's decision, but she gives her and Starlight some space before she becomes a third wheel again.

Pinkie Pie: [long high-pitched squeal, rapidly] You're moving to Ponyville! We'll live together and get bunk beds and I'll make us fuzzy slippers that say "Best Sister Friends Forever", although I probably can't fit all those words on a slipper, so maybe just "BSFF", but we don't have to decide right now because we'll be together all the time since when it comes to Ponyville, the doctor is in!
Maud Pie: [deadpan] Slow down, Pinkie Pie.
Pinkie Pie: Yooooouuuuu'rrrrrrrreeeeeeee mmmmmmmmmmooooooooovvvvvvvviiiiiiiinnnnnnnnnggggggg tttttttooooooo Pooooooooooonnnnnnnnyyyyyyyyvvvvvvviiiiiiilllllllleeeeeeeee....

Rarity: Congratulations on your rocktorate! What are you doing now?
Maud Pie: [deadpan] Talking to you.

Starlight Glimmer: The trick with an S.L.K. is not to make the spars too heavy. But if they're too light, you've got no ballast and then good luck tacking against the A.O.I.! [beat] I really like kites. 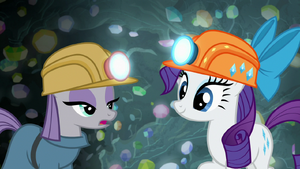