Rockhoof is a male Earth pony and figure of Equestrian legend first mentioned in season six's The Crystalling - Part 2. He makes his first physical appearance in My Little Pony: Legends of Magic Issue #2 and his first in-show appearance in the season seven episode Campfire Tales.

Rockhoof shares his body design with Trouble Shoes and "Hammerhead McColt". He speaks with a Scottish accent.

Rockhoof is first mentioned in The Crystalling - Part 2 by Sunburst as the subject of a spell called "Rockhoof's Rapport".

In Campfire Tales, Rockhoof is the subject of a campfire story told by Applejack, and is her and Apple Bloom's favorite legend. In the story, Rockhoof is the son of a farmer who lives in a village at the foot of a great volcano. He dreams of joining an elite group of pony guards called the Mighty Helm. Unfortunately, he is too scrawny to even pull an axe out of a tree stump. The guardsponies ridicule him for his weak stature, giving him a shovel and telling him to stick to farming and digging.

One day, the volcano near the village erupts and threatens to destroy it. When the villagers refuse to abandon their homes, Rockhoof uses his shovel to dig a trench and divert the lava's flow. Through his determination and sheer force of will, Rockhoof miraculously transforms into a larger, more powerful stallion, giving him enough strength to finish digging the trench and save the village from destruction. His achievement earns him the respect of his fellow villagers and acceptance into the Mighty Helm's ranks.

In the season seven finale Shadow Play, Rockhoof is revealed to be one of the six "Pillars of Old Equestria" with Mistmane, Flash Magnus, Somnambula, Mage Meadowbrook, and Star Swirl the Bearded, representing the Element of Strength. Long ago, he and the other Pillars were brought together by the unicorn Stygian to battle a great evil. When Stygian later turned into the Pony of Shadows, Rockhoof and the others sacrificed themselves to imprison him in limbo.

In present day, Applejack retrieves Rockhoof's shovel for a ritual to free the Pillars from limbo. When the Pony of Shadows is freed along with them, Rockhoof and the other Pillars team up with the Mane Six to separate Stygian from the darkness and banish it to limbo once again.

In Non-Compete Clause, a bust of Rockhoof appears in the School of Friendship.

In A Rockhoof and a Hard Place, Rockhoof has trouble fitting into the modern world. After the Mane Six fail several times to find a new role for him in Equestria, including as a teacher at the School of Friendship, he asks Twilight Sparkle to turn him into a stone statue. With some convincing from Twilight, Yona, and the school students, Rockhoof is appointed as Equestria's "keeper of tales", finally granting him a purpose in modern Equestria.

In Sounds of Silence, Rockhoof is mentioned as having given Twilight some information on the Kirin.

In The Ending of the End - Part 1, Rockhoof and his fellow Pillars face off against Lord Tirek, but they are easily overpowered and drained of their magic due to Tirek being empowered by the Bewitching Bell. As a result, Rockhoof returns to his original, scrawny self. In Part 2, he and the Pillars keep Tirek, Queen Chrysalis, and Cozy Glow busy while Twilight's friends escape. He is later present during the final battle against the villains, having been teleported along with the other Pillars (and restored to his more powerful form) by Twilight's magic, and helps the Mane Six and Young Six defeat them.

In the My Little Pony: Legends of Magic series, Rockhoof appears on cover A of Issue #1 and as the central character of Issue #2. In the latter issue, Sunburst reads about Rockhoof's exploits after joining the Mighty Helm, written by Star Swirl the Bearded. While Rockhoof enjoys a period of outperforming the other guards and making close friends, his continuous nights of partying with them cause him to gain a lot of weight and severely slow down in guard training.

When the volcano is in danger of erupting again, Rockhoof discovers the cause to be a Cherufe, a one-eyed lobster-like creature of rock and magma. Due to being out of shape, Rockhoof is quickly defeated by the Cherufe and disgracefully dismissed from the Mighty Helm. To redeem himself, Rockhoof gets back into shape and challenges the Cherufe a second time, eventually reuniting it with its child.

Rockhoof also appears on My Little Pony: Legends of Magic Issue #7's cover B, cover RI, and page 20 and in Issue #8, in which he joins Stygian on his mission to save his village from the sirens. In Issue #9, he and Stygian recruit Mage Meadowbrook for their mission; in subsequent issues, they and the other Pillars work together to defeat the sirens and then rescue Princess Celestia and Princess Luna from an alternate universe.

Rockhoof appears as a carousel horse on My Little Pony: Nightmare Knights Issue #3 cover B and Issue #4 cover B, and also in Stygian's nightmare on Issue #4 page 3.

In My Little Pony: Friendship is Magic Issue #84, Ocellus briefly takes on Rockhoof's appearance as part of her school project. He also appears on the A cover of Issue #88.

In Issue #89, the start of the IDW comics' "Season 10" run, Rockhoof travels to Zecora's homeland of Farasi with her, Applejack, and Tempest Shadow. He initially balks at the long sea voyage required, pointing out that his shovelling skills will be of little use on a boat, but proves himself wrong by using those same skills to patch a number of leaks during the journey. After Zecora rebuffs her old friend Marini's offer of a hug, Rockhoof gladly grants her one himself. In Issue #90, he wins the respect of Zecora's old friends by finding water with his shovel, and helps find the ingredients for a potion to repel the attacking Grootslang. In Issue #91, both his group and Zecora's old friends travel through the desert, seeking to find the Grootslang's hideout. When they finally locate it, the Grootslang attacks, and Rockhoof and Tempest decide to hold it off while the others get to shelter. In Issue #92, Rockhoof and Tempest fight the Grootslang for as long as they can (Rockhoof breaking his shovel against the creature's head), but are ultimately overpowered, with the unconscious Rockhoof carried to safety by Tempest. Following the Grootslang's defeat and the return of water to Farasi, Rockhoof takes some time to regale a group of foals with tales of his heroism before returning home.

In My Little Pony: Friendship is Magic Issue #101, Rockhoof assists in defending Canterlot from the Knights of Order, but he is ultimately knocked out of the fight by King Danu and mind-controlled by Morrigan. In Issue #102, Rockhoof is freed from Morrigan's mind control, and he helps in finally defeating Danu.

Rockhoof appears in an illustration in episode 4 of Fundamentals of Magic, "Magical Objects".

Rockhoof and Young Rockhoof are characters in Gameloft's mobile game, and Rockhoof plays a role in the 2017 Hearth's Warming Eve storyline. He also serves as a boss battle helper during the "Reflections of Harmony" event, for which Young Rockhoof is the top community prize, and during the “Casobronco” event. Rockhoof's in-game description states, "The legendary savior of his Earth pony village, Rockhoof's example proves that smarts and hard work can win out over brute strength!" Young Rockhoof's in-game description states "Even the mightiest Pillar of Old Equestria can recall a time when he was not SUPER-DUPER JACKED. It keeps him humble!"

"It seems the dark places Star Swirl indicated on the map have changed."
— Shadow Play - Part 2

"Come. We must prepare for the struggle ahead."
— Shadow Play - Part 2

"Stygian was a pony like the rest of us – though more scholar than hero. He recognized our emerging world would need champions to defend it."
— Shadow Play - Part 2

"I know I'm new to your world, but there's one thing I learned when I saved my village from a rushing river of hot lava. There's nothing you can't do with hard work. And a shovel!"
— A Rockhoof and a Hard Place

"Begging your pardon, ma'am. I'd keep me shovel if it's all the same to you."
— To Steela Oresdotter, My Little Pony: Legends of Magic Issue #2

"Oh, this? Aye, this is the shovel that saved the town. Of course you can touch it, but be warned, it's still hot."
— My Little Pony: Legends of Magic Issue #2

"Did you say challenge?"
— My Little Pony: Legends of Magic Issue #2

"Being part of the Mighty Helm is all I ever wanted to do. It's time I proved it."
— My Little Pony: Legends of Magic Issue #2 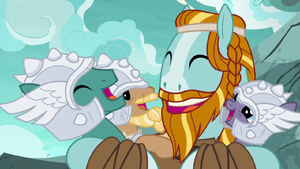