Start a Wiki
"Roma"
Roma is the placeholder name of a female Earth pony with a cream-yellow coat, two-tone brown mane, blue-green eyes, and a cutie mark of three tomatoes. She is unnamed in the show, credited only as "Vendor" in the closing credits of One Bad Apple and referred to as "MARKET SALESPONY" in the My Little Pony guidebook The Elements of Harmony.

Roma first appears in the season two episode Putting Your Hoof Down operating a tomato stand at the Ponyville marketplace. She sells three tomatoes to Fluttershy for two bits, the cost having gone up from one bit the previous week, but Pinkie Pie tricks her into selling the tomatoes for half the price.

In the season three episode One Bad Apple, Roma sells carrot crêpes at the Summer Harvest Parade. In the season four episode Trade Ya!, Roma operates a stand again at the Rainbow Falls Traders Exchange. Here, she sometimes appears without a hat.

Roma appears on the official season two poster and other second-party merchandise that depict the same. Page 31 of Little, Brown's My Little Pony Friendship is Magic official guidebook My Little Pony: The Elements of Harmony lists her as simply "MARKET SALESPONY".

"[clears throat] That'll be two bits. Not one."
— Putting Your Hoof Down

"That was then, this is now."
— Putting Your Hoof Down

"Mindin' my own business. Maybe you should try it."
— Putting Your Hoof Down

"I say it's two bits."
— Putting Your Hoof Down

"One bit and that's my final offer!"
— Putting Your Hoof Down 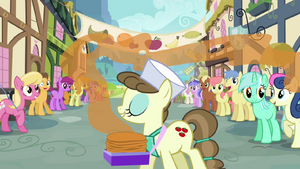 Retrieved from "https://mlp.fandom.com/wiki/Roma?oldid=2161293"
Community content is available under CC-BY-SA unless otherwise noted.