Rose, or Roseluck,[note 1] is a female Earth pony with a pale yellow coat, raspberry mane with light raspberry streaks, chartreuse green eyes, and a cutie mark of a rose. She has speaking roles in several episodes and other media.[note 2]

Her color scheme and design are similar to the G3 pony Desert Rose.

Rose is a recurring background pony, usually appearing alongside Daisy and Lily Valley. Her first appearance and spoken lines are in Applebuck Season; she lies in the middle of the road with Daisy and Lily following the bunny stampede and comments on every flower nearby being eaten. In Bridle Gossip, Daisy calls her by name, and she panics over Twilight Sparkle and her friends' appearances after their run-in with poison joke and runs inside a nearby house. Her mane style briefly resembles that of Trixie's during this.

In The Cutie Pox, she appears again with Daisy and Lily, believing the titular disease afflicting Apple Bloom to be a hex and fleeing for safety after Spike's less than subtle explanation.

She appears briefly in The Super Speedy Cider Squeezy 6000 during The Flim Flam Brothers and in the cider queue.

In Apple Bloom's imagined apocalyptic Ponyville in Hearts and Hooves Day, she's briefly seen screaming from the rooftops along with Berryshine.

Her next speaking role is in A Friend in Deed. Pinkie Pie, calling her by name, comments on how she thinks Rose will win first prize in the flower show again. Rose thanks Pinkie and proceeds to throw Pinkie a flower, which she then eats.

In Putting Your Hoof Down, she is shown in attendance of Iron Will's seminar, stepping aside to reveal Fluttershy when Iron Will beckons her to the stage.

In Ponyville Confidential, she appears in a very brief sweeping shot of Ponyville reading the Foal Free Press.

In Flight to the Finish, she stands next to Dr. Hooves. She also appears in Pinkie Pride. She is seen next to a 3D glasses-wearing Dr. Hooves again in It Ain't Easy Being Breezies. She later appears in Leap of Faith and Equestria Games.

In season five, Rose appears in Slice of Life with a speaking role aside Daisy, Lily Valley, and Derpy. She is also seen seated next to Dr. Hooves at the wedding. In Amending Fences, Rose appears as a unicorn with a different cutie mark. She watches the Sisterhooves Social in Brotherhooves Social, talks to Dark Moon during Light of Your Cutie Mark in Crusaders of the Lost Mark, and appears outside Sugarcube Corner, talking to Apple Cobbler in The One Where Pinkie Pie Knows. She and Dr. Hooves appear in the group shot near the end of Friends Are Always There For You in The Cutie Re-Mark - Part 2.

In season six, Rose watches Tender Taps' performance in On Your Marks, appears talking with Electric Sky and Golden Harvest in No Second Prances, and watches the Wonderbolts' performance (as a unicorn in some shots and as an Alicorn in others) in Newbie Dash. She is once again paired with the Doctor in A Hearth's Warming Tail decorating for the Hearth's Warming and singing the final lines of Hearth's Warming Eve Is Here Once Again (Reprise). She sits on the spa's reception couch in Applejack's "Day" Off and watches the baseball game in The Fault in Our Cutie Marks.

In Celestial Advice, Rose is one of the many ponies attending the Equestrian Pink Heart of Courage medal ceremony at the Castle of Friendship. In Rock Solid Friendship, she makes a background appearance walking around the Ponyville marketplace. She watches the Wonderbolts' performance in Canterlot with Dr. Hooves in Parental Glideance, and argues with Lemon Hearts in Fame and Misfortune. In Triple Threat, she and the other Flower Ponies appear as background characters standing together in Ponyville. In It Isn't the Mane Thing About You, she runs the flower stand with the other Flower Ponies and has several speaking roles.

In the hour-long special My Little Pony Best Gift Ever, Rose appears wrapping gifts with Daisy and Lily Valley during One More Day.

In The Beginning of the End - Part 2, Rose appears as one of King Sombra's mind-controlled slaves in Ponyville and subsequently part of his army during his invasion of Canterlot. She and the other mind-controlled ponies later confront the mane six when they arrive at Canterlot's gates. In Common Ground, she makes a background appearance as a patron at the Appleloosa Buckball Hall of Fame. In She's All Yak, she appears in the reused group shot from "The Cutie Re-Mark - Part 2". In Student Counsel, Rose appears selling flowers to Trixie and Starlight. In 2, 4, 6, Greaaat, she appears in the audience spectating the halftime cheerleading routine during the buckball game between School of Friendship and the School of Magic. In A Trivial Pursuit, she and the other Flower Ponies appear as spectators for Trivia Trot. In The Summer Sun Setback, she sits closely with Dr. Hooves during the Summer Sun Celebration in Canterlot and also stands behind one of the fireworks cannons Pinkie Pie fires during the event. In She Talks to Angel, Rose and Daisy appear selling flowers at the Ponyville Marketplace while Angel inhabits Fluttershy's body and pops up to tell them a poem. In Dragon Dropped, she and Dr. Hooves appear standing together at the Ponyville train station. In A Horse Shoe-In, she appears in the audience for Octavia Melody's concert with DJ Pon-3. In Growing Up is Hard to Do, she appears walking in Ponyville as the Cutie Mark Crusaders, turned into adults run by, startling her and the other ponies on the street. In The Big Mac Question, she sells flowers to Sugar Belle at the Ponyville marketplace. In The Ending of the End - Part 2, she appears with the other earth Ponies in Ponyville as the earth ponies isolate themselves from the other pony tribes. In The Last Problem, Rose appears in a flashback riding the train to Canterlot, watching Twilight's coronation with Dr. Hooves, and in Pinkie Pie's group shot during The Magic of Friendship Grows.

Times stated below are approximate and taken from various videos.

Rose is one of many ponies seen in the establishing shot of Ponyville in My Little Pony Equestria Girls: Rainbow Rocks. She is seen talking to Daisy.

Rose's human counterpart appears in the Rainbow Rocks animated short Life is a Runway, once during the runway sequence and again at Carousel Boutique at the very end of the short.

In the second season, Rose appears having lunch in the CHS cafeteria in Schedule Swap and talking with Derpy in the Sweet Snacks Café in Five Stars. In Cheer You On, she attends Flash Drive's concert in the school gymnasium and runs away with most of the other students when the gym is attacked by Micro Chips' rampaging robot.

Rose's human counterpart appears at the end alongside Derpy as a new member of Wallflower Blush's gardening club.

Rose's human counterpart appears in the rollercoaster car behind Rainbow Dash and Fluttershy, riding with an older patron.

Appearances with Daisy and Lily Valley

The three appear together in Applebuck Season, Bridle Gossip, and The Cutie Pox. In Applebuck Season, they react during and to the aftermath of the bunny stampede. In Bridle Gossip, they react to Zecora entering town with the main characters. In The Cutie Pox, they react to Apple Bloom's strange symptoms, letting out sighs of relief when Spike dismisses their claims of the cause. Rose and Daisy appear in The Super Speedy Cider Squeezy 6000 at different places in the cider queue. In Apple Bloom's imagined apocalyptic Ponyville in Hearts and Hooves Day, an emaciated Lily Valley runs around in a panic wearing a dunce hat, while Rose cries out in despair atop a roof, next to Berryshine. In A Friend in Deed, all three of them appear briefly in the crowd Pinkie Pie addresses concerning Cranky Doodle Donkey's need for a toupee. All three ponies appear in Putting Your Hoof Down at Iron Will's motivational seminar. The three appear again briefly reading the paper, but Rose can be seen only briefly since it zooms past her. Daisy and Lily Valley appear in One Bad Apple. In Slice of Life, they react to news that they need to put flower arrangements for Cranky Doodle Donkey and Matilda's wedding a day early, and later when they see a zinnia with its stem snapped. The flower ponies appear selling flowers for Mares' Day in It Isn't the Mane Thing About You, one of the few times they do not overreact to anything.

Rose appears in the European magazine​[​specify​]​ comic Trixie never gives up! with a speaking role[note 2] during the story about young Trixie.

Rose appears in the manga story The Titter Tree with a speaking role.

In My Little Pony/Transformers Issue #2, she appears in the audience of Pinkie Pie's baking show.

Roseluck is a character in Gameloft's mobile game, and serves as a boss battle helper during the "Rarity's Retro Revolution" event.

A Rainbow Rocks doll of Roseluck has been listed on Hasbro's website.[13]

Rose: The horror... the horror...
Lily Valley: It was awful.
Daisy: A disaster. A horrible, horrible disaster.

Lily Valley: Our gardens, destroyed.
Rose: Every last flower, devoured.
Daisy: By... by... them!

Daisy: Look Rose! How awful!
Rose: The wicked enchantress has cursed them all.
Lily Valley: The horror! The horror!

Pinkie Pie: Oh, Rose, your Calla lilies look even better than last year! I bet you'll take first prize at the flower show again.
Rose: Thanks, Pinkie. Would you like one?

"If you could go to any time or place in history, where would you want to go?"
— Enterplay collectible card game Sands of Time​[​dubious – discuss‍​]​ #1 F card of Dr. Hooves 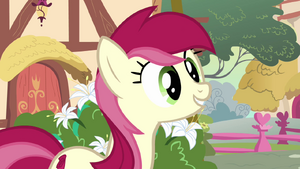 Retrieved from "https://mlp.fandom.com/wiki/Rose?oldid=2180951"
Community content is available under CC-BY-SA unless otherwise noted.