Royal Pin, or Pinprick, is a male unicorn with a blue coat and a light blue and white mane and tail. His eye color varies between gold, amber, and blue. His cutie mark varies between a safety pin, an hourglass, three chess pieces, and a horseshoe, and his horn size varies. He is unnamed in the show, but he is named "Royal Pin" sometimes with a trademark symbol and "Pinprick" in different merchandise and other media.

In late April 2011, DHX Media/Vancouver layout artist "FlashinthePan" stated that the team didn't "think very much of" Royal Pin "at all" and that he "would really have only shown up to whoever worked on the scene, and (for us) as a silly gag."[1][2]

Royal Pin first appears in Friendship is Magic, part 1 at the Summer Sun Celebration when Nightmare Moon appears. He is also seen at Princess Luna's welcoming party in part 2, in Rainbow Dash's fantasy in The Ticket Master, and at Trixie's magic show in Boast Busters.

In Call of the Cutie, he attends Diamond Tiara's cute-ceañera and is seen happily popping balloons with his horn. He watches the Running of the Leaves in Fall Weather Friends, the Cutie Mark Crusaders' talent show performance in The Show Stoppers, and the Summer Sun Celebration in Twilight Sparkle's flashback in The Cutie Mark Chronicles.

In Sweet and Elite, Royal Pin appears multiple times, sometimes in formal attire and with orange eyes. He is seen at the pageant in Hearth's Warming Eve and in Granny Smith's flashback in Family Appreciation Day. He briefly appears with blue eyes in The Super Speedy Cider Squeezy 6000.

Royal Pin appears in Canterlot in Princess Twilight Sparkle - Part 1 and Part 2. He appears at Manehattan's Fashion Week in Rarity Takes Manehattan, during Pinkie Pie and Cheese Sandwich's goof-off in Pinkie Pride, at the Cutie Mark Crusaders' play in For Whom the Sweetie Belle Toils, and multiple times at the Rainbow Falls Traders Exchange in Trade Ya! In Equestria Games, he appears as a spectator of the Games and he is one of the competitors during the ice archery event. He appears in Twilight's Kingdom - Part 1 and its recap at the beginning of Twilight's Kingdom - Part 2.

In Make New Friends but Keep Discord, Royal Pin appears, with an hourglass cutie mark, as a guest of the Grand Galloping Gala. In Slice of Life, he appears varyingly with a safety pin cutie mark and hourglass cutie mark. He also appears with an hourglass cutie mark in Princess Spike. In Do Princesses Dream of Magic Sheep?, he appears in Ponyville's shared dream. In Canterlot Boutique, he appears during Rules of Rarity with a different cutie mark. In Rarity Investigates!, watching the Wonderbolts practice from the VIP box. In Brotherhooves Social, he swings a jumping rope for Apple Bloom and "Orchard Blossom" during the social. In The Cutie Re-Mark - Part 1, he appears in two places in one audience, varying in appearance.​[​specify​]​ He also appears in the final group shot during Friends Are Always There For You in The Cutie Re-Mark - Part 2.

In the Signature My Little Pony magazine issue 69 comic Daring friends and the missing story!, Royal Pin appears at the Canterlot Magic Fair.[3]

Royal Pin is a character in Gameloft's mobile game. His in-game icon, adapted from fanart of him marrying Pinkie Pie,[4] shows him with his gold eye color and with his larger horn size. His in-game description states, "With a safety pin cutie mark, it's safety first all the way for this unique unicorn!"

A mini-figure toy of Royal Pin has been displayed at the 2014 American International Toy Fair.[5] The toy and its accompanying collector card were released as part of the eleventh wave of mystery packs and named with a trademark symbol. According to the card, Royal Pin "loves to make clothes for his friends!" The toy and card depict him with his safety pin cutie mark, the toy depicts him with his gold eye color and with Shining Armor's design, and the card depicts him with his amber eye color.

In Enterplay's collectible card game, Royal Pin is named "Pinprick" on his own cards α #47 R and α #ƒ20, which attribute to Lemony Gem the quote "Hey, watch the horn! Popping balloons is one thing, but you could hurt somepony!" The cards depict him with his larger horn size and with his safety pin cutie mark. 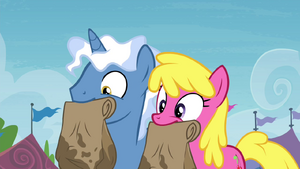