Royal Ribbon is a female unicorn pony who commonly appears among high society ponies in Canterlot and Manehattan. She has a hot pink coat, blue mane, light purple eyes, and a cutie mark of a scroll. She is unnamed in the show, but she is named in merchandise and other media. She has speaking roles in Green Isn't Your Color and Princess Twilight Sparkle - Part 1.

Royal Ribbon has the same name as a G3 Earth pony mare with a similar color scheme.

Royal Ribbon appears primarily as a background pony in the show, with three speaking lines.

Royal Ribbon first appears in The Ticket Master during Rarity's fantasy of marrying Prince Blueblood. She later appears in Green Isn't Your Color, watching Photo Finish's fashion shows. Along with the other ponies, she is at first annoyed when Fluttershy 'ruins' a show, but eventually laughs, and delivers her second line. She also appears in Applejack's flashback in The Cutie Mark Chronicles, walking along a street in Manehattan and later attending the Oranges' dinner.

In The Best Night Ever, Royal Ribbon appears numerous times in and around the castle. During At the Gala, she is part of Rarity's, Rainbow Dash's, and Pinkie Pie's choirs. She is forced into a hug by Pinkie at the end of I'm at the Grand Galloping Gala. Her cutie mark is partly visible as she walks past Applejack's booth. She is present when Pinkie gets the ensemble to play the Pony Pokey. A pony with the same design, but different colored mane, also appears in the episode.

In Sweet and Elite, Royal Ribbon appears at the beginning of the episode and drinks from a teacup she levitates, makes various appearances during Becoming Popular (The Pony Everypony Should Know) such as in a crowd of ponies trying to buy a vase, and attends the garden party at the episode's end. She appears at the beginning of Hearth's Warming Eve. She appears in A Canterlot Wedding - Part 2, when she attends the wedding, then the resulting party, and is seen dancing.

In season three, Royal Ribbon only makes one appearance, being in Magical Mystery Cure.

In The Cart Before the Ponies, Royal Ribbon appears shopping at Carousel Boutique.

Royal Ribbon is a playable character in Gameloft's mobile game. Her in-game description states, "As a self-professed stylist, Royal Ribbon likes to think of herself as a fashion connoisseur! When it comes to trends, she lives by her motto: 'If it ain't got a ribbon, you sure won't be winnin'!'"

Two simultaneous instances of Royal Ribbon appear in the footer background of a former Hub web page on Promotions.com for Castle Creator.[1]

"So lovely."
— Referring to Fluttershy, Green Isn't Your Color

"It's her. The unicorn in the gorgeous cape and headdress."
— Referring to Rarity, Green Isn't Your Color 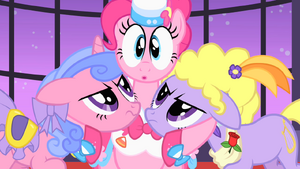