Royal Riff is a male Earth pony with a light purple coat, white mane and tail, orange eyes, and a cutie mark of two white G-clefs. He is unnamed in the show, but he is named in merchandise and other media. He has a speaking role in Putting Your Hoof Down.

The Crystal-Glitter mini-figure first toy of Royal Riff was, as with most of the fourth wave of mystery pack toys, leaked in mid-November 2011,[1] and a promotional photo of both it and the European version of its corresponding collector card was, along with promotional photos of the packaging and other twenty-three toy-and-card pairs for the fourth wave of mystery packs, leaked in late November 2011;[2] both of these leaks preceded the release of Royal Riff's debut episode The Mysterious Mare Do Well.

Royal Riff appears in The Mysterious Mare Do Well, cheering for Mare Do Well after she repairs for the dam and as she flies through the sky. He later appears several times in The Super Speedy Cider Squeezy 6000, before, during, and after The Flim Flam Brothers, and once in Hearts and Hooves Day during The Perfect Stallion. In Putting Your Hoof Down, he has a brief speaking role when Fluttershy beats him up and throws him from a taxi carriage.

In Too Many Pinkie Pies, Royal Riff appears outside Golden Oak Library complaining about the Pinkie Pie duplicates in Ponyville. In One Bad Apple, he wears a carrot costume in the Summer Harvest Parade and is also briefly seen watching the parade from the crowds. He appears during Twilight Sparkle and Trixie's first duel in Magic Duel and at the Crystal Empire train station in both Just for Sidekicks and Games Ponies Play.

Royal Riff appears in the Crystal Empire stadium crowd in Flight to the Finish, several times as a Crystal Pony. He also appears at the beginning of Rarity Takes Manehattan, numerous times in Pinkie Pride, and twice in both Simple Ways and Filli Vanilli. He watches the migration of the Breezies in It Ain't Easy Being Breezies and attends the after-party of the Cutie Mark Crusaders' play in For Whom the Sweetie Belle Toils. He is seen several times in Leap of Faith, during the Flim Flam Miracle Curative Tonic song and at the Ponyville swim meet; in Trade Ya!, sometimes with green eyes; in Inspiration Manifestation, being trapped in a crystallized Town Hall with Berryshine at one point; in Equestria Games; in a flashback to Leap of Faith in Twilight's Kingdom - Part 1; and in Twilight's Kingdom - Part 2.

Royal Riff appears at the end of The Cutie Map - Part 2, shops at Davenport's Quills and Sofas outlet in Castle Sweet Castle, appears in Apple Bloom's dream in Bloom & Gloom, attends Cranky Doodle Donkey and Matilda's wedding in Slice of Life, watches a mime perform in Princess Spike, attends the friendship party in Party Pooped, appears in Ponyville's shared dream in Do Princesses Dream of Magic Sheep?, and watches the Sisterhooves Social in Brotherhooves Social. In Crusaders of the Lost Mark, he makes cameo appearances walking in Ponyville during Light of Your Cutie Mark and in the crowd as Rarity, Rainbow Dash and Applejack sing to the Cutie Mark Crusaders during We'll Make Our Mark. In The Mane Attraction, he appears at Sweet Apple Acres during preparations for the Helping Hooves Music Festival and watches Countess Coloratura's rehearsal performance of The Spectacle. In The Cutie Re-Mark - Part 1, he appears walking in Ponyville with Golden Harvest and as part of the changeling resistance in an alternate timeline created by Starlight Glimmer. In The Cutie Re-Mark - Part 2, he and the other members of the resistance bring Twilight Sparkle and Spike to their camp and confront the changelings when they infiltrate and attack the camp.

At the beginning of The Crystalling - Part 1, Royal Riff he makes a cameo appearance walking in Ponyville. In Newbie Dash, he appears in the audience for the Rainbow Dash's first flight show as full-time member of the Wonderbolts. In A Hearth's Warming Tale, he appears inside the Castle of Friendship during a Hearth's Warming Eve celebration, singing Hearth's Warming Eve Is Here Once Again and its reprise. In Applejack's "Day" Off, he appears as a patron of the Ponyville Day Spa. In The Cart Before the Ponies, he cheers while spectating the Applewood Derby during Derby Racers. In Buckball Season, he appears at the Ponyville train station cheering for the Ponyville buckball team as they leave to play in Appleloosa. He and the other Ponyville fans later appears spectating the game in Appleloosa. In The Fault in Our Cutie Marks, he appears watching Gabby play baseball during Find the Purpose in Your Life and later attending Gabby' cute-ceañera. In Where the Apple Lies, he appears in a flashback watching a surgery lecture in the Ponyville Hospital.

In Celestial Advice, Royal Riff talks to Whitewash and later stands at a table while attending Starlight Glimmer's medal ceremony in the Castle of Friendship. In A Flurry of Emotions, he appears as a patron of the Ponyville Café during Spearhead's art exhibit. In Forever Filly, he makes a background appearance standing with Goldengrape in Ponyvile. In The Perfect Pear, he appears in the Ponyville Marketplace as a customer for Grand Pear's stand. In Fame and Misfortune, he makes a background appearance walking through Ponyville. In Triple Threat, he and other ponies approach Ember after she arrives in Ponyville and gets scared by her fire breath. He later attends Ember and Thorax's Flame of Friendship party. In A Health of Information, he appears in a flashback over a thousand years ago waiting in a line of ponies suffering from Swamp Fever to Mage Meadowbrook's house for treatment.

In Non-Compete Clause, Royal Riff appears walking in the School of Friendship courtyard with Golden Harvest and Florina Tart. In The Break Up Break Down, he appears decorating a house from a balcony with Cheerilee on Hearts and Hooves Day and makes subsequent appearances enjoying the day with Amethyst Star at the Ponyville Café and at later that evening. In Yakity-Sax, he walks in the park with Shoeshine and runs away upon hearing Pinkie Pie's poor yovidaphone playing. In Road to Friendship, he watches Trixie's magic show in the park. In The Washouts, he makes a cameo appearance walking in Ponyville. In A Rockhoof and a Hard Place, he appears in Canterlot talking to Sunshine Smiles.

In The Beginning of the End - Part 2, Royal Riff appears as one of King Sombra's mind controlled slaves in Ponyville and follows him to Canterlot. Later, he and the other mind controlled ponies confront the Mane Six when they arrive in Canterlot. In Common Ground, he makes various background appearances in Appleloosa in the movie theater, offering bits for Snails' autograph with other fans, entering the buckball stadium and cheering during a game. In Student Counsel, he appears sitting in Ponyville talking to Lily Valley. In 2, 4, 6, Greaaat, he spectates the buckball game between the School of Friendship and Princess Celestia's School of Magic and also watches the halftime cheerleading routine. In A Trivial Pursuit, he makes a background appearance walking through Ponyville with Crusoe Palm. In Growing Up is Hard to Do, he appears as a passenger on the Friendship Express during Being Big is All It Takes, sitting with Lucky Clover as the adult Cutie Mark Crusaders walk over the seats. In The Big Mac Question, he appears in Ponyville with Crusoe Palm hearing Discord's echo, and talks with him at the Ponyville Marketplace. He later appears walking alone in Ponyville hearing Apple Bloom's echo. In The Last Problem, he appears in a flashback attending Twilight's Sparkle's coronation as ruler of Equestria in Canterlot.

Royal Riff is a character in Gameloft's mobile game. The game's description of him states, "This gentlecolt wishes to be a famous composer! With a little more practice, he will win the audience over!"

Royal Riff is depicted with the same design as Big McIntosh and named in the fourth, sixth, eighth, and tenth waves of mystery pack toys and collector cards, the European versions of which state that he "makes up songs!" and the U.S. versions of which list his name with a trademark symbol and state that he "makes up songs to sing together with friends!" The eighth wave's packaging, Crystal Princess Celebration printed insert advertising, Little Brown's Mini Pony Collector's Guide pages 161 and 164, and Tesco's website show a pink-maned not-officially-released version of Royal Riff's Neon-Bright mini-figure;[3] this version was leaked in late November 2012,[4] preceding the released version.

Royal Riff also appears with his name listed with a trademark symbol in Enterplay's collectible card game, which is the first time that he is simultaneously referred to by name and depicted with the same design as in the show. His card α #78 C lists the quote "I know just the tune for the occasion!" 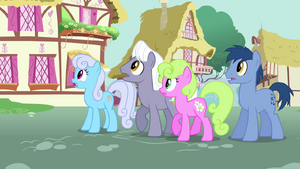