Ruby Pinch is depicted as a unicorn all throughout the series, save for a few exceptions. She first appears as a Pegasus in Friendship is Magic, part 2. Ruby Pinch runs with Aura and "Mango Dash" in Dragonshy and is present at Diamond Tiara's cute-ceañera in Call of the Cutie. She also appears as a Pegasus in The Cutie Mark Chronicles. She appears without wings in one shot due to an animation error.[3] Ruby Pinch also appears as a Pegasus in Dragonshy and during flashbacks in Hurricane Fluttershy. Ruby Pinch watches Apple Bloom in The Cutie Pox appearing as a Pegasus and once as an Earth pony. She works for the Foal Free Press in Ponyville Confidential and has a speaking line defending Namby-Pamby's job as editor. She later appears in Flight to the Finish, sometimes as a Pegasus. She appears again in Pinkie Pride, Filli Vanilli, Twilight Time, It Ain't Easy Being Breezies, Leap of Faith, Equestria Games, and Twilight's Kingdom - Part 2.

Ruby Pinch appears in episode 7 of Baby Flurry Heart's Heartfelt Scrapbook, "Hearth's Warming Eve". She also appears as one of Princess Celestia's School for Gifted Unicorns students in the first and fourth episodes of Fundamentals of Magic.

In My Little Pony/Transformers Issue #2, Ruby Pinch appears on page 11 in the audience of Pinkie Pie's baking show.

Ruby Pinch, under the name "Winsome Schoolpony", is a character in Gameloft's mobile game.

"But Namby-Pamby was a great editor."
— Ponyville Confidential 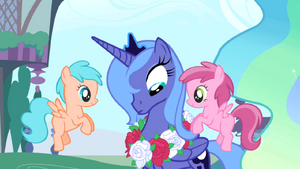