Ruby Splash is a female background Earth pony who first appears in the season four episode Rarity Takes Manehattan. She has a light blue coat, deep cerise mane, tail, and eyes, and a cutie mark of a strawberry and a bunch of green grapes. She is unnamed in the show, but she is named in merchandise.

Ruby Splash first appears in Rarity Takes Manehattan touring the city of Manehattan, looking in a department store window and riding a ferry to the pony version of the Statue of Liberty. She appears again later in Equestria Games in the Crystal Empire stadium.

Ruby Splash appears in Made in Manehattan as a Manehattan tourist again, seen exploring the city and mingling with various Manehattan ponies after the Midsummer Theater Revival.

Ruby Splash appears in The Crystalling - Part 1 where she is seen in the Crystal Empire courtyard reading a map. She appears again in Manehattan in The Gift of the Maud Pie, among the Manehattan ponies looking at Pinkie Pie after her shouts create an echo, and subsequently looking at a toy stand with Noi.

Ruby Splash makes a background appearance in Manehattan looking at billboards of the Mane Six's friendship journal in Fame and Misfortune.

Ruby Splash appears as a customer at Gallus' Tree of Harmony museum in Uprooted. In Between Dark and Dawn, she makes a cameo appearance at a tourism stop with an unnamed foal during Lotta Little Things. In Growing Up is Hard to Do, she attends the Appleloosa County Fair standing behind a high striker game, and later sits in the stadium talking to two unnamed mares during the Fair's Animal Showcase.

Ruby Splash is named with a trademark symbol in the eleventh wave of mini-figure toys and collector cards. According to her collector card, Ruby Splash "is famous for her delicious berry pies!" 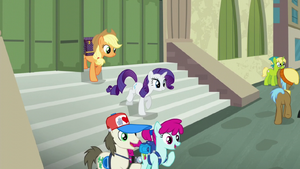