Rumble is a Pegasus colt who first appears in the season two episode Hurricane Fluttershy. He has a bluish gray coat, a two-tone dark gray mane and tail, and purple eyes. He is Thunderlane's younger brother.

Unlike most colts, Rumble has the same muzzle shape as most fillies. He bears a slight resemblance to "Shady Daze".

Rumble first appears in Hurricane Fluttershy alongside his brother Thunderlane when Twilight Sparkle tests her anemometer and Spike gives a simplified explanation of what an anemometer is. When Rainbow Dash orders Thunderlane to be the first test flyer and he measures a wingpower of 9.3, Rumble gives him a look of impressed approval. Rumble appears once more before the first tornado formation attempt, informing Rainbow Dash that Thunderlane is sick with the feather flu.

In Flight to the Finish, Rumble appears beside Featherweight in the stage area where the Cutie Mark Crusaders practice their Equestria Games flag carrying routine for Rainbow Dash. In Twilight Time, Rumble appears mostly off-screen during the grand opening of Pipsqueak's lemonade stand. In Inspiration Manifestation, Rumble appears with his brother Thunderlane at the Foal and Filly Fair.

Rumble appears alongside Thunderlane at the beginning of The Cutie Map - Part 1, and at a lakeside party for "Shady Daze" in The One Where Pinkie Pie Knows.

Rumble appears alongside Thunderlane in A Hearth's Warming Tail.

Rumble has his first major character role in Marks and Recreation, in which he doesn't want to get a cutie mark because he believes it limits one's possibilities to just one thing, and convinces the other attendees at the Cutie Mark Crusaders' cutie mark day camp to think the same way. With help from the Cutie Mark Crusaders and his older brother Thunderlane, Rumble learns that cutie marks do no such thing and that, despite his eventual cutie mark, he can still pursue multiple interests, including his dream of becoming a Wonderbolt.

In The Break Up Break Down, Rumble is one of the possible candidates that the Cutie Mark Crusaders consider for Sweetie Belle's supposed secret admirer.

In The Ending of the End - Part 2, Rumble briefly appears taking shelter with other Pegasi in Cloudsdale as the city closes itself off from the other pony races. In The Last Problem, Rumble helps with the food for Twilight Sparkle's coronation ceremony. He also briefly appears in Rainbow Dash's group shot during The Magic of Friendship Grows.

In My Little Pony: Friendship is Magic Issue #81, Rumble visits Wonderbolts headquarters with Thunderlane, Rainbow Dash and Scootaloo, excited to take part in an actual Wonderbolts performance. During practice, Rumble is knocked out of the sky by an overzealous Wonderbolt and sprains his wing, leaving him unable to participate. In an effort to cheer Rumble up, Scootaloo takes him exploring. At the Wonderbolts museum, they find the statue of an earth pony named Wind Sock, and learn how he became the only non-Pegasus member of the team by inventing a glider. Inspired by the story, Rumble uses a replica of the glider to fly in the performance.

Rumble:
Rumble is the calm before the storm! If he keeps working hard, one day he's sure to cause a whirlwind in Canterlot with his Pegasus prowess!
Chef Rumble:
Maybe one day he can be a Wonderbolt AND a professional culinary artist! Who to say otherwise?
Glider Rumble:
Currently using one of Wind Sock's glider designs to stay aloft despite a wing injury. Good looking out, Rumble!
Summertime Rumble:
Take it from Rumble: Summertime is the best time for a consistent cardio routine!

RUMBLE dreams of being a fast flier like his older brother, Thunderlane. He's a determined colt with a ton of heart. Keep an eye on the skies!

Rumble appears on the Season 2 poster.

In the Canterlot Nights expansion set of Enterplay's collectible card game, card #20 C lists Rumble's name with a trademark symbol and gives him the description "Rumble's big brother Thunderlane is one of the best fliers in Ponyville, so Rumble practices every night trying to catch up."

"He's got the feather flu. He's down at Ponyville Hospital."
— Hurricane Fluttershy

"Actually, I don't need your help. Because I don't want to get my cutie mark!"
— Marks and Recreation

"I already know I'm a good flyer. It kinda runs in the family. I guess it's time to see what other stuff I can do."
— Marks and Recreation 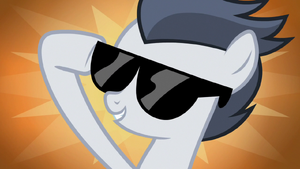