My Little Pony Friendship is Magic Wiki
Register
Don't have an account?
Sign In
Advertisement
in: Pages suggested for renaming, Pages that need improvement, Pages that need copyediting,
and 5 more
English

Haakim and Amira are the merchandise-used​[​specify​]​ placeholder​[​dubious – discuss‍​]​ names of two Earth ponies who appear in Magic Duel and Equestria Games. They are members of Saddle Arabian royalty or significant authority who appear as members of a delegation to Ponyville.

Haakim has a similar color scheme to Crusoe Palm and Trenderhoof. Though Haakim and Amira are horse-like in appearance, Discovery Family (previously the Hub Network)'s online game Equestrivia Challenge identifies them as ponies.[1] Unlike most ponies in the series, neither of them has a cutie mark.

Haakim and Amira first appear in the season three episode Magic Duel. Princess Celestia brings them to Ponyville as part of a delegation from Saddle Arabia for which Twilight Sparkle provides entertainment and Trixie provides fireworks. The delegates are left visibly impressed by the performance.

Haakim and Amira appear again in the season four episode Equestria Games as Games spectators in the Crystal Empire stadium. As members of royalty/authority, they share a private spectators' box with Princess Celestia, Princess Luna, Princess Cadance, Twilight Sparkle, and others.

In My Little Pony: Friendship is Magic Issue #61, Haakim and Amira attend the Convocation of Creatures as representatives of Saddle Arabia.

In Discovery Family (previously the Hub Network)'s online game Equestrivia Challenge, Haakim and Amira are pictured with the question, "Who are those fancy-looking ponies with Princess Celestia?", the correct answer for which is "Saddle Arabians".

Haakim and Amira are featured​[​citation needed​]​ on page 94 of the My Little Pony Character Guide published by Orchard Books in the United Kingdom on September 6, 2018.[2]​[​specify​]​ 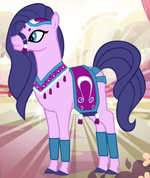 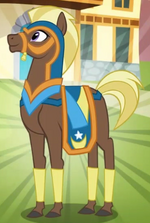