Not to be confused with "Ever Essence".[1]

The Sailor Moon ponies[2][3] are ten background Pegasus and unicorn ponies designed to resemble the female protagonists of the anime/manga series Sailor Moon,[1] including Celena, Aqua Mist, Burning Heart, Juno, Love Melody, Natural Satellite, Charon, Umbriel, Larissa, and Saturnalia. They are gradually introduced in the IDW comics and in the series. They are all unnamed in the series with their names being placeholder names, but Celena is named "Magical Pony" in some media.

In season five, Celena appears in Scare Master dressed as Sailor Moon for Nightmare Night. In the same episode, one of the pony props featured in Fluttershy's dinner party resembles Celena.

In The Cutie Re-Mark - Part 2, Burning Heart, Juno, and Love Melody all appear as residents of Sire's Hollow when Starlight Glimmer, Twilight Sparkle, and Spike travel back in time. Burning Heart, Love Melody, Natural Satellite, and Saturnalia also appear during Friends Are Always There For You.

In season six, Burning Heart, Juno, and Love Melody appear again in Starlight Glimmer's flashback in The Crystalling - Part 1, and Fluttershy's prop of Celena is featured on display at the Daring Do Convention in Stranger Than Fan Fiction.

In season eight, Juno, Love Melody, and Burning Heart appear in Trixie's School of Friendship class in A Matter of Principals, and Juno appears in Twilight's class during Rockhoof's introduction in A Rockhoof and a Hard Place.

In the Nightmare Rarity story arc, Celena and Juno appear on My Little Pony: Friendship is Magic Issue #5 page 2. Here, Juno has a different coat color. In My Little Pony: Friendship is Magic Issue #8, Aqua Mist, Burning Heart, and Love Melody take part in the battle against Nightmare Rarity and her Nightmare Forces. Here, Love Melody is a Pegasus with a different coat color.

In My Little Pony Micro-Series Issue #8, Natural Satellite and Saturnalia appear at the School for Gifted Unicorns' Royal High Tea on page 7, and Charon, Umbriel, and Larissa appear in a flashback on pages 10 and 12, defending Canterlot from a monster attack.

In Gameloft's mobile game, Celena is a playable character called "Magical Pony", added in the version 3.1 update on September 28, 2016. The game's description of her states "Never do evil in her sight, or she will stop you with her magical might!" 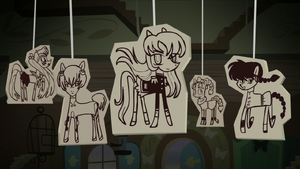