Sand Trap is an elderly male Earth pony with a tan coat, two-tone gray mane and tail, deep green eyes, and a cutie mark of a golf club and two golf balls. He is unnamed in the series, but he is named in My Little Pony: Ponyville Mysteries Issue #3.

In The Cutie Pox, he loses a game of chess against Apple Bloom when she becomes afflicted with cutie pox. In The Mysterious Mare Do Well, Sand Trap appears with other elderly ponies on a balcony. When the balcony breaks and falls, Sand Trap and the other elders are saved by Rainbow Dash. In Putting Your Hoof Down, Sand Trap has a speaking role opposite Fluttershy as he buys asparagus in the Ponyville marketplace.

Sand Trap briefly appears in Sleepless in Ponyville looking out a second-story window as Scootaloo sails through the air on her scooter.

Sand Trap appears on the Ponyville Days festival selection committee in Simple Ways, attends Flim and Flam's miracle tonic demonstration in Leap of Faith, welcomes Twilight Sparkle to the Rainbow Falls Traders Exchange in Trade Ya!, and appears in the Crystal Empire stadium in Equestria Games.

Sand Trap appears very briefly at the beginning of Slice of Life standing alongside Dance Fever.

Sand Trap briefly appears in A Flurry of Emotions as a patient at Ponyville Hospital. In The Perfect Pear, he appears as a young stallion in multiple flashbacks. In Once Upon a Zeppelin, he appears as one of the cruise attendees.

In Grannies Gone Wild, he makes a background appearance standing with "Chelsea Porcelain" in a Las Pegasus hotel.

In The Point of No Return, he appears napping in the Silver Stables Retirement Community lobby. He also appears windsurfing with S09E05 Unnamed Earth Mare #3 as Twilight and Spike ask them if they have seen Dusty Pages. They shake their heads and surf away.

In Coinky-Dink World, he shares a table with "Chelsea Porcelain".

In Spring Breakdown, Sand Trap appears as a passenger on the Luxe Deluxe spring break cruise. He appears in the theater with Mr. Waddle during Trixie's magic show, attends the Rainbooms concert, and is rescued by the Equestria Girls when the ship sinks and transported to a nearby island.

In the segment "Dashing Through the Mall", Sand Trap makes a cameo appearance giving a holiday present to Pearly Stitch.

Sand Trap appears on My Little Pony: Friends Forever Issue #27 pages 17 and 19. In My Little Pony: Ponyville Mysteries Issue #3, he is one of the Cutie Mark Crusaders' suspects for setting fire at the Ponyville Retirement Village. 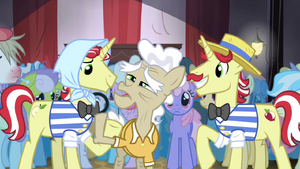