Sandalwood first appears in My Little Pony: Equestria Girls as a student of Canterlot High School. Fluttershy identifies him as one of the "eco-kids" in the school's various social cliques.

Sandalwood's presence throughout the film is minimal; he mostly appears in crowd shots with other CHS students. During This Strange World, he appears playing with a hacky sack. After Time to Come Together, he is among the first to cast their vote for Twilight Sparkle as Princess of the Fall Formal. He also appears at the Fall Formal itself wearing glasses.

In My Little Pony Equestria Girls: Rainbow Rocks, Sandalwood is turned against his fellow CHS students by the Dazzlings' siren magic. He performs in the CHS Musical Showcase with "Captain Planet" and "Paisley", but they are eliminated in the first round by Flash Sentry and his band.

Sandalwood briefly appears in Music to My Ears, playing with a hacky sack in the CHS hallway as he did in the first film. In Pinkie on the One, he appears sitting at a table in the CHS cafeteria. In Player Piano, he appears in the school hallway when the Diamond Dog boys rush through with Rarity's grand piano. In A Case for the Bass, he appears at Granny Smith's yard sale. He appears in the CHS audience during the Rainbooms' song in Shake your Tail!, and attends the Canterlot High School carnival and watches the Rainbooms perform in Perfect Day for Fun.

In My Little Pony Equestria Girls: Friendship Games, Sandalwood takes part in the titular sporting event against Crystal Prep Academy as a member of the Canterlot High School Wondercolts. During the wood-shop portion of the Academic Decathlon, he is paired up with Micro Chips, and the two produce a shoddily put-together birdhouse. They are eliminated from the competition by Sugarcoat and Indigo Zap, who gloat over their victory afterwards.

In Photo Finished, Sandalwood makes a background appearance sitting in the cafeteria as Photo Finish takes pictures of other CHS students. In All's Fair in Love & Friendship Games, he has his first speaking role, informing the other students that the Friendship Games tryouts have started. He also tries out for the Games himself, performing a baton-tossing routine. In A Banner Day, he has a starring role alongside Flash Sentry and Micro Chips. Vice Principal Luna tasks the three with making a banner to welcome Crystal Prep Academy to the Friendship Games. Sandalwood's peace-based ideas conflict with those of his friends, but the final product is met with Vice Principal Luna's approval.

In My Little Pony Equestria Girls: Legend of Everfree, Sandalwood goes with his friends and classmates to Camp Everfree, appearing at multiple points throughout the film. At one point, he shares a sailboat ride with Derpy and has a brief speaking role.

In Dance Magic, Sandalwood briefly appears having lunch in a diner with Octavia Melody.

In Mirror Magic, Sandalwood briefly appears walking with "Sweet Leaves" outside Canterlot High School and at the Canterlot Mall during Juniper Montage's attack.

Sandalwood makes background appearances attending CHS sporting events in Steps of Pep, standing in front of the school with "Aqua Blossom" in The Art of Friendship, and sitting in the school caferteria in Epic Fails.

In the first season, Sandalwood has speaking roles in A Fine Line, in which he waits in line for the new Tirek's Revenge video game with Micro Chips, and in Overpowered, in which he finds a jelly bean in his locker. He also makes minor appearances in Queen of Clubs, X Marks the Spot, Aww... Baby Turtles, Lost and Found, the Rainbow Dash ending of Best Trends Forever, Fluttershy's Butterflies, the Pinkie Pie ending of Stressed in Show, Opening Night, Happily Ever After Party, and Five to Nine.

In the second season, Sandalwood appears watching Trixie's Magic show in Street Magic with Trixie!. In Best in Show: The Pre-Show, he appears watching the Canterlot Pet Show with Paisley. In Schedule Swap, he informs Sci-Twi that she is in a regular physics class, not an advanced one and later appears in the school cafeteria. In FOMO, he appears talking to Micro Chips outside the school and later walks with him under his arm. In I'm on a Yacht, he appears dancing by the pool area during a party on the Luxe Deluxe cruise ship, eventually jumping in. In Cheer You On, he appears as the keyboardist in Flash Sentry's band as they perform the titular song, in which he also has a rap verse. He later appears cheering as the Equestria Girls defeat Micro Chips' rampaging robot.

Sandalwood makes several appearances in Forgotten Friendship during We've Come So Far, at the beach, and during Invisible.

In Rollercoaster of Friendship, Sandalwood makes several background appearances as an Equestria Land patron riding the rollercoaster. He later appears in the audience for the park's light parade and even later during Photo Booth watching Rarity's fashion show.

In Spring Breakdown, Sandalwood appears as a passenger on the Luxe Deluxe cruise ship, seen at the pool area during Rainbow Dash's search for "bad magic" and in the crowd during the Rainbooms' concert. When the ship starts to sink, he evacuates with the other passengers and is brought to the nearby island.

In Sunset's Backstage Pass, Sandalwood appears in the security line for the Starswirled Music Festival. Later, during the 16th time loop of the first day of the festival, he appears texting at the festival as Sunset Shimmer pushes him out of the way from getting hit by a flying snow cone after Snips trips, referring to him by name. He later appears attending PostCrush's concert with Sunset and Pinkie during the final time loop.

In "The Cider Louse Fools" segment, Twilight makes a cardboard cutout of Sandalwood to help Applejack fool the Flim Flam brothers. In "Dashing Through the Mall", he briefly appears in the background at the Canterlot Mall talking to "Captain Planet". In "O Come, All Ye Squashful", he appears exiting the classroom when the bell rings and laughing at and taking pictures of the Equestria Girls in their cornucopia costumes.

Sandalwood is mentioned as Fluttershy's secret crush in the book My Little Pony Equestria Girls: Canterlot High Tell-All (Replica Journal). Fluttershy says, "Oh boy! That earthy guy who plays in the Green Cycle band. I'm too shy to let him know that he gives me the butterflies!" and "He is so kind to animals- he asked the woodworking class to make a birdhouse!"

"There are limited spots on the CHS team! So bring your A-game! [laughs]"
— All's Fair in Love & Friendship Games

"But what we should do is portray peace through art. One love, bros."
— A Banner Day

"You're harshing the flow!"
— A Banner Day

"And how am I supposed to paint my spirit guide when there's DNA and a treble clef in the way?"
— A Banner Day

"Yeah. It was so weird. We were stuck in a middle of the lake with no wind, then all of a sudden, bam! The wind picked up, and we were pushed right into the dock."
— My Little Pony Equestria Girls: Legend of Everfree

"Gloriosa, I kicked my beanbag into the lake!"
— My Little Pony Equestria Girls: Legend of Everfree

"Can you believe we've already been here three hours?! Time flies when you're with your best friends! Ha ha! Let's do trust falls!"
— A Fine Line 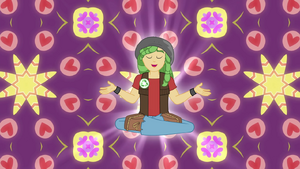