Sandbar is a male Earth pony and one of the Young Six[1][2][3] who appears in My Little Pony Equestria Girls: Forgotten Friendship and seasons eight and nine of the show as a student at Twilight Sparkle's School of Friendship.

In the season eight premiere School Daze - Part 1, Sandbar enrolls in Twilight Sparkle's newly opened School of Friendship as a student, and Gallus is the first creature he meets. Along with most of the other students, Sandbar is hopeful about learning friendship and making new friends, but Twilight's strict adherence to the Equestria Education Association's guidelines causes the school courses to be dull and boring. He later cuts class with Gallus and other classmates Ocellus, Silverstream, Yona, and Smolder (joining them in hopes of keeping them out of trouble), and the six become good friends.

When Sandbar and his friends return to school for Friends and Family Day, they accidentally ruin the event and cause damage to the school, much to the ire of the EEA's Chancellor Neighsay. Neighsay perceives the fun and games as an attack orchestrated by non-pony creatures, leading the offended tribe leaders to pull their own students out of the school and Neighsay to shut the school down. Not wanting to say goodbye to each other, Sandbar and his friends go into hiding at the Castle of the Two Sisters, and Sandbar—the only pony in the group—delivers food and supplies for them from Ponyville.

Though the students have fun together at first, they soon come under attack by ferocious puckwudgies, and the Mane Six save them. When Sandbar and his friends are asked to come back to school, they are reluctant to continue their boring lessons, but Twilight and the others assure them things will be better and more fun than before. After Twilight defies the authority of Chancellor Neighsay and reopens the School of Friendship, Sandbar happily returns to school with his friends.

In Non-Compete Clause, Sandbar and his friends go on a teamwork-building field trip with Applejack and Rainbow Dash. For most of the trip, Applejack and Rainbow Dash's arguing over who will be the next teacher of the month disrupts the planned activities, and ultimately causes them to become trapped over a ravine, with Sandbar and his friends having to work together to save them.

In Molt Down, Sandbar appears on the school's balcony with Gallus and Silverstream, and later in the library alongside Smolder and Yona.

In Marks for Effort, he is among the students attending Fluttershy's class, and later exits the school after a test with the rest of the Young Six.

In A Matter of Principals, Sandbar and his classmates are shown various magical artifacts by Twilight just before she is summoned by the Cutie Map. He and his friends are later forced to run laps by Discord, who conjures up a bugbear to chase them. During the Spell-venger Hunt, Sandbar is paired up with Yona, and they get trapped in quicksand by Discord before finding the Shell of Knuckerbocker. He and his friends are present when Starlight Glimmer apologizes to Discord for not including him and offers him the job of "vice headmare".

In Friendship University, Sandbar appears with his friends looking at a flyer for the university. In The End in Friend, he and his classmates observe Rainbow Dash and Rarity as part of Twilight's lesson on compromising in friendship. In A Rockhoof and a Hard Place, Sandbar is one of the students in Rockhoof's class and the first to recognize his status as one of the Pillars of Old Equestria.

In What Lies Beneath, Sandbar and his friends start to question their friendship due to comments made by Cozy Glow. During their studies for an upcoming test, they discover a cavern beneath the school, where the Tree of Harmony interacts with them. As part of a test, the Tree forces Sandbar to confront his dual fears of disappointing the teachers he admires and letting his friends down. After overcoming his fears by standing up to illusions of Rainbow Dash and Rarity who keep insisting that he leave the others behind, he escapes with the rest of his friends.

In the season eight finale School Raze, Sandbar attends a field trip to Cloudsdale with his friends and classmates, and he falls out of the clouds due to Starlight's magic failing. During a study period with his friends, he notices Cozy Glow coming out of the catacombs under the library, and in their investigation of her, they overhear a plot by Chancellor Neighsay to make the school for ponies only and get captured. Upon their capture, Sandbar fakes betraying his friends in order to get help from the Cutie Mark Crusaders, and they discover Cozy Glow's true nefarious plans to take over Equestria.

After Sandbar and the Crusaders help the rest of the Young Six escape, they try to free a magically-trapped Starlight Glimmer, but Cozy catches them and convinces the students to turn on them. Sandbar and his friends get trapped with Starlight and are nearly sucked into another realm with all of Equestria's magic, but they are saved by the Tree of Harmony, and they succeed in foiling Cozy Glow's plans.

In the holiday special My Little Pony Best Gift Ever, Sandbar and the rest of the Young Six appear at the beginning boarding the Friendship Express.

In Uprooted, Sandbar and his friends are contacted by the Tree of Harmony in their dreams, and they later discover that the Tree was destroyed by King Sombra. In their collective effort to honor the Tree's memory, Sandbar tries to replace it with a little sapling. Eventually, Sandbar and his friends work together to build a treehouse out of the Tree of Harmony's remains, and the treehouse magically transforms into a much larger treehouse in the middle of the Castle of the Two Sisters.

In She's All Yak, Sandbar asks Yona to go with him to the Amity Ball, and he is later surprised to discover Yona underwent a drastic change in look and personality to be more pony-like. After Yona causes damage at the dance and runs away in shame, Sandbar finds her hiding at the Treehouse of Harmony and tells her she was already "the best Yona". When the two return to the dance, they are declared the winners of the Pony Pal Contest, and Sandbar follows Yona's lead in the "Yakyakistan Stomp".

In The Ending of the End - Part 1, Sandbar and the rest of the Young Six work together with Starlight Glimmer and Trixie to evacuate the School of Friendship while Cozy Glow, Queen Chrysalis, and Lord Tirek are on the loose. In Part 2, Sandbar rallies the Earth ponies of Ponyville to help their fellow pony races in their final battle against the villains, and he and the rest of the Young Six help the Mane Six and Pillars of Old Equestria defeat them.

In The Last Problem, Sandbar attends Twilight Sparkle's coronation ceremony. He later appears as an older stallion in future Ponyville and in Fluttershy's group shot during The Magic of Friendship Grows.

In Mystery Voice, Sandbar and his friends attend Rarity's lesson on how to make Hearth's Warming dolls. In Teacher of the Month, Sandbar is shown in flashbacks depicting how Fluttershy earned the eponymous award so many times, and in the present at Applejack and Rainbow Dash's "student appreciation day" party.

Sandbar appears in My Little Pony: Friendship is Magic Issue #71 celebrating Nightmare Night with his friends. In Issue #74, he attends the All-Equestria Mane Styling Conference with Fluttershy, Zephyr Breeze, Silverstream, and Yona. In Issue #84, he and the rest of the Young Six realize how Ocellus is pushing herself too in trying to perfect her midterm project, and seek out Twilight's help. In Issue #87, Sandbar and the rest of the Young Six help Rainbow Dash train for the Draytona Breach race. He also appears on the A cover of Issue #88.

In My Little Pony: Friendship is Magic Issue #101, Sandbar and his friends are shown to be in Canterlot as part of a field trip, and are taken to shelter by Starlight and Trixie before the Knights of Harmony attack. They are later seen having been discovered by the Knights, and held hostage in order to force Twilight and her friends to stand down.

In My Little Pony: Feats of Friendship, Sandbar and his friends form a team to take part in the titular event, and are joined by exchange student Swift Foot, who he quickly develops a crush on (which allows her to easily manipulate him).

In the Friendship is Magic: Free Comic Book Day comic, Sandbar appears on page 12 at the breakfast banquet for Princess Twilight's first sunrise as ruler of Equestria.

In My Little Pony/Transformers Issue #4, Sandbar takes part in the final battle against Queen Chrysalis' evil changelings and the Decepticons, protecting the Crystal Empire's magical items from Shockwave.

In My Little Pony/Transformers II Issue #3, Sandbar and his friends are transported to Cybertron, encountering Octavia Melody and Vinyl Scratch and being confronted by the Decepticon Soundwave. When Soundwave's attack gets them all trapped, Sandbar helps convince Soundwave to work together with Octavia and Vinyl to escape by offering him their magic.

Sandbar appears on the cover of the adaptation Meet the New Class.[6][7]

Sandbar and Future Sandbar are characters in Gameloft's mobile game, and Sandbar is a boss battle helper character and enemy minion in the School Raze, "Reflections of Harmony", and She's All Yak events. His bio states, "This chill young stallion will always stick by the pals he's made at the School of Friendship--no matter what kind of creatures they may be!" Future Sandbar has a story role in the "She's All Yak" event, and is obtained by playing through it. His bio states "It isn't ours to speculate on Sandbar's future, but we'd bet it involves majestic mountains, tender feelings, and all kinds of new dance steps."

Starting with The Maud Couple, Sandbar also appears in the theme song.

A brushable figure of Sandbar is included in the upcoming Friendship is Magic "Teamwork Lessons" toy set with Rainbow Dash and Tank.[8]

Sandbar is featured on a magazine​[​specify​]​ card.

Among the Young Six, Sandbar is portrayed as the easygoing "straight man" to counterbalance his friends' more eccentric personalities. He is also the most considerate and thoughtful among them, demonstrated when he gives Gallus a replacement quill during the School of Friendship song, defends Yona's love for her heritage, and agrees to cut class with his schoolmates in order to keep them out of trouble.

In Uprooted, Sandbar's dream shows that he struggles to choose between different types of cupcakes. He is also shown to care for plants, even giving a sapling earmuffs when he thinks Gallus is disturbing it.

"I wouldn't say all day. Just... ninety-nine percent of it."
— Non-Compete Clause

"Totally confused."
— A Matter of Principals

"I've always looked up to you. You would never turn your back on each other, and that's what makes you strong. Now I have a group of friends that I think is every bit as amazing as yours. If I have to give up on them to make you proud, then you aren't the ponies I thought you were. I don't care if I disappoint you. You disappoint me."
— What Lies Beneath

"You were right about them from the beginning, Chancellor. I see that now. [...] I don't want anything to do with creatures that could threaten Equestria!"
— To Chancellor Neighsay, School Raze - Part 1

"I dunno. That sounds too clever for a pony to come up with."
— School Raze - Part 2

"Yona, it doesn't really matter if you're a great pony or a horrible pony. You're the best Yona I know. That's why I asked you to the dance."
— She's All Yak

"It's not just singing that saved the founders of Equestria! It's what it represented!"
— The Ending of the End - Part 2 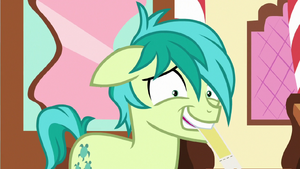