Sapphire Shores is a famous female Earth pony pop star singer from Canterlot, whom Rarity addresses as "The Pony of Pop". She first appears in the episode A Dog and Pony Show.

Sapphire Shores appears in the cold opening/introduction of A Dog and Pony Show, walking into Rarity's Carousel Boutique after hearing about her designs. Rarity is awe-struck when she sees Sapphire, and addresses her as "The Pony of Pop." Sapphire is enthralled by Rarity's newly-made diamond garment and wants to buy it for her tour, called Sapphire Shores' Zigfilly Follies.

Along with that particular garment, she requests five more costumes in gems of different sorts, which is a problem for Rarity, as she had used all of her gems to make the one garment.

Sapphire Shores makes a cameo appearance in the season two episode Sweet and Elite. During the song Becoming Popular (The Pony Everypony Should Know), when Rarity is surrounded in a checkerboard pattern of high-society ponies, Sapphire Shores is seen next to Hoity Toity. She also makes a cameo in the season four episode Rarity Takes Manehattan, in the Fashion Week crowd with Hoity Toity and Photo Finish.

Sapphire appears again in For Whom the Sweetie Belle Toils as one of Rarity's premiere clients. She initially appears in Sweetie Belle's dream, disapproving of Rarity's slipshod fashion designs and calling her "my ex-costume designer." She later appears alongside her backup dancers during a rehearsal in Canterlot. When Rarity shows Sapphire the costumes she made for her, she expresses her utmost approval for the dolphin-shaped stitching Sweetie Belle added, the shape of Sapphire's "lucky animal."

Two of Sapphire Shores' songs, as mentioned by Apple Bloom and Scootaloo, are called "Get Your Pony On" and "Serves Her Right."

Sapphire makes a cameo appearance in Equestria Games, sitting in the stadium crowd next to Hoity Toity. She is also briefly mentioned in Canterlot Boutique and The Mane Attraction. In School Raze - Part 1, Cozy Glow gives the School of Friendship students tickets to a Sapphire Shores concert.

In the half-hour special Dance Magic, Sapphire Shores is briefly mentioned by Sour Sweet, one of her songs having been used for the Shadowbolts' music video rehearsals.

Sapphire Shores appears in the Ruckus storybook Rarity Loves Fashion, identified as a pop star whom Rarity has made clothes for.

In Rarity and the Curious Case of Charity, Sapphire Shores is mentioned in the story's narration and is featured on the bonus activity page "Searching for Sapphires." She also appears in Beyond Equestria: Pinkie Pie Steps Up as one of several singers participating in the Glammy Awards.

Sapphire Shores is a playable character in Gameloft's mobile game, where her in-game description states "Known as "the Pony of Pop", Sapphire Shores is a celebrity mare from Canterlot who enjoys Rarity's clothing designs." She is the focus of the quests for the Mine Cart minigame, where the player must collect gems to make a new dress for her next tour.

Sapphire Shores appears in episode 1 of Rarity's Peek Behind the Boutique, "Fashion Do's and Don'ts".

The fifth wave of mystery pack toys and collector cards includes Sapphire Shores as a unicorn with a light green coat, a blue and white mane, blue eyes, and a seashell cutie mark. Like many other mystery pack characters, she here uses the same design as another pony, in this case unicorn Twilight Sparkle. The European earlier version of the card states that she "is quietly kind[,]" while the U.S. later version of the card lists her name with a trademark symbol and states that she "loves to collect pretty seashells."

An Equestria Girls: Rainbow Rocks doll of Sapphire Shores has been listed on Hasbro's website.[5] The packaging lists her name with a trademark symbol, shows her both as a pony—this time using her usual appearance—and as a human, and states, "It's all about standout style when you're a pop star like me! I always dress to impress and look fabulous on stage."

In Enterplay's trading cardss series 2 card #23 of Sapphire Shores lists her name with a trademark symbol, erroneously lists her cutie mark as not known, and gives her the description, "Look, look, it's the world famous Pony of Pop herself, Sapphire Shores! Sapphire knows that even the most talented pony has to look sensational when she goes out on stage, so she makes it a point to know all the up-and-coming designers—like Rarity! You can see Sapphire Shores in concert on her spectacular tour, Sapphire Shores Zigfilly Follies! Just don't be surprised if her fans faint. She does have that effect on a pony."

SAPPHIRE SHORES is known for her music throughout Equestria as the Pony of Pop. The fashion-forward celebrity has a taste for Rarity's jeweled creations.

SAPPHIRE SHORES is a big star, known across the Equestria as "the Pony of Pop." She had Rarity design quite a few outfits for her over many moons, including a whole gem-based wardrobe for her Sapphire Shores's Zigfilly Follies tour.

"Yes, I do have that effect on ponies."
— Sapphire Shores, referring to Rarity fainting

Sapphire speaks with a loud, theatrical voice and with an accent reminiscent of an African-American vernacular, and she frequently inserts musical intonations into her sentences. She appears to be a parody of the self-promoting star who is always "on." Despite her fame and over-the-top mannerisms, she seems to be quite friendly and approachable towards Rarity.

"I make it a point to know all of the up-and-coming designers, and Clothes Horse magazine simply raved about you."
— A Dog and Pony Show

"One more time, from the top. Let's not embarrass me in front of my favorite designer this time."
— For Whom the Sweetie Belle Toils

"It's a dolphin! That's my lucky animal! They swim with me in my dreams."
— For Whom the Sweetie Belle Toils

"Let's give it up for the Sapphire Shores crew! Woo! What was that dance called? It was hawt!"
— Friendship is Magic Issue #10 page 8

"I'm getting ready for my new tour, "Hooves Across Equestria", but I can't do it in the dress I wore for the last tour!"
— My Little Pony (mobile game)

"I need something new, something sparkly, something with... sapphires!"
— My Little Pony (mobile game)

"This mine is amaaaazing! I could make 1,000 dresses out of the stuff down here! But I, uh, maybe got a little carried away and rode the mine cart so fast the wheels melted, so... Can you please help me find some new ones?"
— My Little Pony (mobile game)

"With these new mine cart wheels ready to go, we can explore the mine whenever we want! Ah, just... please don't tell Twilight I melted the last ones..."
— My Little Pony (mobile game)

"I've been asking very politely, but you haven't found me ANYTHING for my new dress! i've got to be on the stage in a few hours!!! What am I going to wear?! One of my 437 other dresses?! everyone's already seen them!"
— My Little Pony (mobile game)

"These... these are beautiful... Laughter, generosity, kindness... Oh, I'm so sorry! I haven't shown ANY of those things! Thank you for helping me find something so much more important than a dress: true friends."
— My Little Pony (mobile game)

"If I'm going to reclaim my place as the number one Pony of Pop, my next show has to be TWICE as big and TWICE as bold!"
— Enterplay collectible card game Absolute Discord #62 C card of Sapphire Shores

"It's all about standout style when you're a pop star like me! I always dress to impress and look fabulous on stage."
— Human version, Rainbow Rocks doll packaging 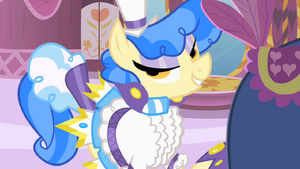