Sassaflash, or Emerald Gem, is a female Pegasus pony with a pale turquoise coat, vanilla mane and tail, carrot orange eyes, and a cutie mark of two lightning bolts. She is not named in the show, however merchandise and other media respectively name her as Sassaflash with a trademark symbol and as Emerald Gem. She shares her design with Parasol. She has speaking lines in Testing Testing 1, 2, 3 and the chapter book Princess Cadance and the Spring Hearts Garden.

Sassaflash appears often in Ponyville and sometimes in Cloudsdale as a background pony. She makes her first appearance in Friendship is Magic, part 1 in the town hall, awaiting the start of the Summer Sun Celebration. In the episode Winter Wrap Up, she starts off as a member of the weather team before suddenly changing to the plant team late in the song and then right back to the weather team. In Lesson Zero, she snatches Twilight Sparkle's doll from Mayor Mare, but loses it again in a fight with Orange Swirl.

She is a part of the The Perfect Stallion song in Hearts and Hooves Day: Sweetie Belle considers Caramel a suitable candidate for a date with Cheerilee, until the camera pans to the left, showing him rubbing noses with Sassaflash. Scootaloo then sarcastically remarks that Caramel's "girlfriend sure thinks" he's "alright".

Sassaflash is seen frequently in Hurricane Fluttershy. She is one of the many Pegasi that help create the tornado for Cloudsdale.

In season five, Sassaflash appears wingless and with a different mane style in Bloom & Gloom. In Tanks for the Memories, she appears among other Pegasi moving clouds in preparation for winter. She appears in Ponyville in Make New Friends but Keep Discord, at the bowling alley and the wedding in Slice of Life, and Party Pooped. She also appears in the final group shot during Friends Are Always There For You in The Cutie Re-Mark - Part 2.

In The Best Night Ever, a pony who highly resembles her marches on the way to the Grand Galloping Gala with a yellow flower tucked into her mane. Her eyes are violet instead of orange and her wings are not discernible.

Times stated below are approximate and taken from videos available online with little to no commercial transition.

Emerald Gem appears with a speaking role in Princess Cadance and the Spring Hearts Garden chapter 7, "Float On".

Sassaflash, wearing her Cleopatrot costume from Luna Eclipsed, is a playable character formerly under the name Emerald Gem in Gameloft's mobile game,[2] with the description "Sassaflash is a sassy Pegasus pony with two lightning bolts for a cutie mark. She loves watching clouds blow across the sky."

Sassaflash appears in episode 5 of Fundamentals of Magic, "When Magic Goes Wrong".

A second mini-figure toy and collector card pair was released in November 2012 as part of the sixth wave of mystery packs. This release uses the same color scheme as the show character, and uses the same name, trademark symbol, and description as the previous U.S. mystery pack release.[4] The show character receives her name from the releases starting with this release.

A third Sassaflash mini-figure toy and collector card pair is part of the eighth wave of mystery packs. This release also uses the same color scheme as the show character,[5][6] and uses the same name, trademark symbol, and description as the previous two U.S. mystery pack releases.

A fourth Sassaflash mini-figure toy and collector card pair is part of the tenth wave of mystery packs, which has been displayed at the 2014 American International Toy Fair. This release again uses the same color scheme as the show character, and uses the same name, trademark symbol,[7] and description as the previous three U.S. mystery pack releases.[8]

Sassaflash also appears in the Enterplay collectible card game's expansion set Canterlot Nights, which is the first time that she is simultaneously referred to by name and depicted with the same design as in the show. Her card #48 R shows her wearing a shirt at the Ponyville bowling alley as in The Cutie Pox and lists the quote "You set'em up, I knock'em down."

Emerald Gem: Your Majesty!
Emerald Gem: I'm so glad you're here. We have an emergency—it's Petal Shine!
— Princess Cadance and the Spring Hearts Garden

"Not exactly, but I think you should come look for yourself...."
— Princess Cadance and the Spring Hearts Garden

Emerald Gem: No, Princess.
Emerald Gem: You misunderstand.... Petal Shine has been like this for hours, and we can't figure out why.
— Princess Cadance and the Spring Hearts Garden

Emerald Gem: She had been out collecting giant Funflowers for our float in the garden earlier....
Emerald Gem: When we came back from having our lunch, she was here just like this.
— Princess Cadance and the Spring Hearts Garden

"What's the last thing you remember?"
— Princess Cadance and the Spring Hearts Garden 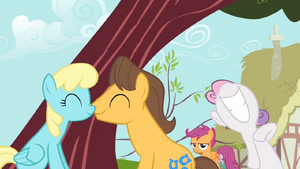