Savoir Fare, or Horte Cuisine, is a male Earth pony waiter with a pale cream coat, a two-tone blue mane and tail, brown eyes, and a cutie mark of a serving dish with a silver cover. He is not named in the show, being called simply "Waiter" in the credits of the season five episode Slice of Life, but he is named in merchandise and other media.

Savoir Fare's name is a combination of the terms savoir-faire and fare.

In response to the request "pls explain how @cappergeneral and @FinalDraftEFN 's OCs made it into the show (referenced)" regarding an Inspiration Manifestation screenshot showing "Mint Flower", Savoir Fare, and S04E19 Unnamed Earth Colt #4, Jim Miller stated, "Those weren't designed to look like anyone's ocs. It's purely coincidence."[2]

Savoir Fare first appears in The Ticket Master as a waiter at the cafe where Twilight Sparkle and Spike eat while Twilight decides whom to give the extra Grand Galloping Gala ticket. He takes Twilight and Spike's orders and looks condescendingly at Spike when he asks for rubies. This is Savoir Fare's first speaking role in the series thus far. He later appears as a unicorn in Applejack's flashback in The Cutie Mark Chronicles; he serves trays of food at Aunt and Uncle Orange's dinner party in Manehattan.

Savoir Fare appears much later in MMMystery on the Friendship Express, mixing drinks in "Con Mane"'s train car during one of Pinkie Pie's stories.

In Magical Mystery Cure, he appears at the cafe again during Morning in Ponyville, briefly dancing on a cafe table.

In Pinkie Pride, Savoir Fare appears at the cafe yet again during Diamond Tiara's verse in Pinkie the Party Planner. The unicorn version of him appears again at the Rainbow Falls Traders Exchange in Trade Ya! In Inspiration Manifestation, he is switched in with S04E13 Unnamed Earth Stallion #1 by Rarity's magic. This is Savoir Fare's only appearance without a mustache. In Equestria Games, he is seen partially blurred in the stadium crowd.

In Slice of Life, Savoir Fare complains to Derpy about not receiving his invitation to Cranky Doodle Donkey and Matilda's wedding. He also appears at the wedding proper. In Amending Fences, Savoir Fare appears as a unicorn serving "Ponet" at a Canterlot cafe.

Savoir Fare appears in Fame and Misfortune serving two ponies having brunch at the cafe.

In The End in Friend, Savoir Fare makes a cameo appearance waiting tables at a Ponyville café and gasps at Rarity and Rainbow Dash's argument with the other patrons.

In The Last Problem, Savoir Fare appears in a flashback receiving crates delivered by Big MacIntosh in preparation for Twilight Sparkle's coronation ceremony. He has a speaking role asking him if he was delivered "the finest sparking apple juice", to which Big MacIntosh affirms. Later during the ceremony, he signals to other waiters to serve the beverages, which turn out to be apple sauce Big Mac wrongly delivered.

Savoir Fare is a playable character in Gameloft's mobile game. His in-game description states, "Savoir Fare is a fancy pony who serves up the best dishes in town and is always deserving of a generous tip."

In Signature My Little Pony magazine issue 62, a pairs game​[​specify​]​ refers to Savoir Fare by the fan-given name "Horte Cuisine".[3]

"Have you made your decision?"
— The Ticket Master

"Eh, madam? Are you going to eat your food in ze rain? "
— The Ticket Master

"Hmph! Perhaps that explains why I never got mine!"
— Slice of Life 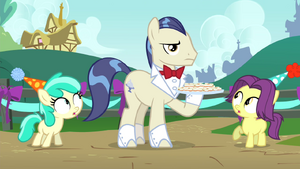