For the similarly titled season one episode, see Stare Master.

Scare Master is the twenty-first episode of the fifth season of My Little Pony Friendship is Magic and the one hundred and twelfth episode overall. The title is a parody of the season one episode Stare Master, which, in turn, is a reference of the exercise machine, the Stair Master.

In this episode, Fluttershy decides to face her fears and take part in Nightmare Night with her friends.

The episode was released early on iTunes on September 21, 2015. It was removed from iTunes later that same day and replaced with the correct episode, Rarity Investigates!. On Netflix, this episode is the fifteenth in the season instead of the twenty-first.

The episode aired on Treehouse TV in Canada on October 24, 2015, despite being scheduled for October 31, 2015 on its original channel, Discovery Family, where it subsequently aired.[1]

A small part showing Pinkie dumping a bucket of water into the water trough reappears in Cakes for the Memories.

On Nightmare Night, Fluttershy closes her curtains and boards up her windows as she does every year. Under Fluttershy's bed, Harry the bear has prepared a hiding place for Fluttershy to wait out the night. Fluttershy is relieved that she won't have to go outside until the next morning, but Angel is out of carrots and won't accept anything else to eat. To Fluttershy's horror, she will have to go out and get food on her most feared holiday of all.

As the rest of Ponyville prepares for Nightmare Night, Fluttershy makes her way through town, passing scary decorations and ponies indulging in the holiday's fun horrors. She runs into Big McIntosh and Granny Smith, who are collecting hay for the Apple family haunted corn maze. When Granny Smith frightens Fluttershy with some of the maze's planned attractions, Fluttershy runs off in fear.

Fluttershy's search for food for Angel leads her to Twilight Sparkle's castle, where she meets Spike dressed in a two-headed dragon costume. Spike mentions how Fluttershy spends every Nightmare Night holed up in her cottage and that she should spend the holiday with her friends for a change.

In the castle library, Twilight and her friends joyfully scare each other with spooky stories. When Fluttershy enters and announces that she's decided to join in Nightmare Night with them, they are overjoyed.

A night without scares

Rarity takes Fluttershy to Carousel Boutique to pick out a costume for her, and Fluttershy eventually settles on a simple black dress. The rest of the Mane Six appear in their costumes as well: Pinkie Pie as an 80s roller disco dancer, Twilight as a Greek soldier, Rainbow Dash as an astronaut, and Applejack as a lion.

Later, the ponies play various Nightmare Night games at Sugarcube Corner, but Fluttershy's irrational fears prevent her from having any fun. When she feels ashamed for being so scared and taking all the fun out of the evening, Twilight suggests that she do the scaring herself. Fluttershy is surprisingly pleased with the idea, and she leaves to make preparations at her cottage.

An hour later, Twilight and her friends go to Fluttershy's cottage to see what scary events she put together. Unfortunately, it's merely an inconveniencing and awkward tea party with unimpressive decorations. Though Fluttershy's friends appreciate her efforts, they aren't scared at all. Fluttershy realizes that she just isn't cut out for Nightmare Night and tells her friends to go have fun without her.

As the other ponies leave the cottage, Fluttershy is ready to spend the evening like she does every year, but Angel convinces her to try again. She asks him for his advice, and he puts on a wicked grin.

Ponies travel to the Apple family's haunted corn maze, and Twilight and her friends are among the first ones to enter. They have fun at first but soon realize they're being followed. Suddenly, they encounter glowing ghosts who chase them up and down the maze. They soon stumble into a hollow tunnel at the base of a tree and become trapped inside.

After discovering a skeleton in a rocking chair made to resemble Granny Smith, Applejack admits that she has no idea what's going on—these developments weren't what she and her family had planned for the maze. Just then, a monstrous scaly creature appears and chases the ponies through the tunnel. They briefly become caught in a sticky spider web, but Twilight frees them with teleportation, and they escape from the monster.

The ponies reach the end of the tunnel and end up on a cliff near the maze, where they encounter Flutterbat. When Flutterbat notices how terrified the ponies are, Fluttershy drops the charade and apologizes for scaring them. The ponies are amazed that Fluttershy put together such a scary display, and Fluttershy says she had some help from her various animal friends.

The following is a sortable chart of costumed characters that appear in the episode, by time of first appearance. Times are approximate.

Granny Smith: Fluttershy? What're you doin' out and about? It's Nightmare Night, remember?
Fluttershy: How could I forget? Oh, I don't suppose I could borrow a few pieces of hay from you. I forgot to stock up on food for Angel and you do seem to have quite a lot.
Granny Smith: We need it for the Apple Family Haunted Maze. [spooky voice] The scariest maze that there ever was. Who knows what lurks inside?
Fluttershy: Oh, I'm sure I don't.
Granny Smith: Is that a mummified pony that just leaped out at ya?
Fluttershy: I don't know. Is it?
Granny Smith: And what's that crunchin' sound beneath yer hooves? Maybe it's the bones of ponies that didn't make it out alive!
Fluttershy: B-B-B-B-Bones?
Granny Smith: And are those peeled grapes or a thousand slimy eyeballs starin' at ya from beyond the grave?
Fluttershy: Please tell me they're grapes!
Granny Smith: Oh, I'll never tell. [maniacal laughter]

Pinkie Pie: And then it got very, very quiet and, suddenly, they realized the balloons had never been inflated!

Fluttershy: Oh, goodness. We've only just started to celebrate Nightmare Night together, and I'm already taking all the fun out of it, aren't I?
Pinkie Pie: You're not taking out all of the fun.
Rainbow Dash: Just, like, ninety per—
[clang]
Rainbow Dash: ...Some of it.

Fluttershy: You all may love Nightmare Night and I may be good at being a part of it, but it's no fun for me to see my friends feel like they're in danger, even if I know they're not. I really don't like it. It's just not my cup of tea.
Pinkie Pie: Spoooooooooky tea?
Fluttershy: No. Just regular tea. 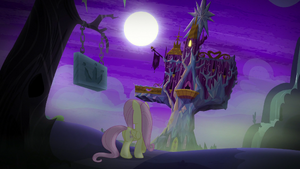