For the episode misidentified as "the Season 8 premiere" in Hasbro's HASCON 2017 panel schedule[1][2], see The Mean 6.

In this first part, Twilight Sparkle decides to open a School of Friendship when the Cutie Map grows bigger to reflect the world beyond Equestria.

The School of Friendship was previewed in a 2018 "MY LITTLE PONY SERIES" image within Hasbro 2017 Investor Day webcast presentations from August 3, 2017.[3][4]

Animatics of the episode were broadcast during Discovery Family's Pony Palooza marathon from March 17-24, 2018.

According to supervising director Jim Miller, the premiere takes place about a week or two after the events of My Little Pony The Movie.[5]

When asked on Twitter in August 2018 about the absence of other members of the EEA introduced in this episode, Miller replied, "All those characters would need full animation flash rigs, voice actors and a purpose in the story" and that "they just weren't needed to tell the story effectively."[6][7]

The episode begins at the Castle of Friendship shortly after the events of My Little Pony The Movie. During Twilight Sparkle and her friends' journey beyond Equestria, the Cutie Map has expanded to include the various locations they visited, including Klugetown, the pirate ship, and Mount Aris. Tempest Shadow, the former lieutenant of the Storm King, has left to travel Equestria and spread the word of his defeat. Realizing that there are so many creatures beyond Equestria who know nothing about friendship, Twilight decides to open a friendship school.

At the School for Gifted Unicorns, Twilight informs Princess Celestia of her plans, and Celestia gives her full approval and support. When Twilight bombards Celestia with questions on how to run the school properly, Celestia tells her that her time as Celestia's pupil has already more than prepared her. In addition, Celestia informs Twilight that her school plans must be approved by the Equestria Education Association—or E.E.A.—the leading authority on all school-related matters.

When Twilight and Spike meet with the E.E.A.'s hard-nosed Chancellor Neighsay, Twilight assures him and his council that her friendship curriculum will make Equestria a safer place. Neighsay places an emphasis on teaching ponies rather than other creatures, but he and the council accept Twilight's plans and grant provisional approval for the opening of her school.

The School of Friendship

Some time later, the School of Friendship is officially opened near Twilight's castle. To realize her goal of teaching friendship to others, Twilight has appointed her friends as teachers and Starlight Glimmer as a guidance counselor. Some of the ponies are unsure about their qualifications to be teachers, but Twilight is confident that everything will be fine as long as they follow the E.E.A.'s guidelines.

The school doors open, and Twilight's friends discover that she has invited not just ponies to be school students but also dragons, griffons, yaks, changelings, and Hippogriffs. As the students get settled in, several key characters start to interact with their new teachers as well as each other: an easygoing Earth pony named Sandbar, a sarcastic griffon named Gallus, a cheerful but clumsy yak named Yona, a gruff dragon named Smolder, a shy changeling named Ocellus, and a hyperactive Hippogriff named Silverstream.

In her first address to the new students, Twilight welcomes them to the school and invites them to "Friends and Family Day" so that students' family members can see their education progress. In the song School of Friendship, both teachers and students are bright-eyed and hopeful for the classes to come. However, as days pass and Twilight forces her friends' lessons to be in accordance with the E.E.A.'s guidelines, the fun that the rest of the Mane Six and the students are having rapidly dwindles.

Doing it by the book

As some of the students get bored and frustrated with their classes and teachers, they start to argue amongst themselves. Smolder challenges Yona's claims that yaks have the best of everything, and Gallus criticizes Sandbar's soft pony sensibilities. Rainbow Dash, Applejack, and Starlight Glimmer break up the argument and tell the students to get to class. With their students arguing around them instead of learning about friendship, the ponies wonder if they are cut out to be teachers.

The next day, in Twilight's office, the ponies complain to her about their lack of teaching progress. But Twilight assures them that, despite their rough start, they will be fine as long as they stick to the E.E.A.'s guidelines. Starlight suggests a teaching method not outlined by the E.E.A., but Twilight says Chancellor Neighsay will be visiting later for Friends and Family Day to make sure the guidelines are being followed.

Frustrated with the boring lessons, Gallus and Smolder decide to ditch class to take a "mental health break". Sandbar, Silverstream, Yona, and Ocellus join them with the assurance that they will be back in time for Friends and Family Day. Before Fluttershy nearly catches them playing hooky, Ocellus disguises herself as Rarity and says she is taking the others on a field trip to the lake. Her quick-thinking is met by Smolder's approval.

Later that day, Chancellor Neighsay arrives at the School of Friendship to check on Twilight's progress. Rainbow Dash informs Twilight and Starlight that her students are gone, but the three of them keep this a secret from Neighsay and distract him. Meanwhile, as Gallus, Silverstream, Smolder, Yona, Sandbar, and Ocellus spend time together at the lake, they start to get along better than earlier, and Ocellus impresses her new friends with her changeling transformations.

At the lake outside the school, ponies and various other creatures gather together for Friends and Family Day. Just as Twilight and Neighsay join them, the students return from ditching class, with Ocellus disguised as a giant insect-like monster. The event attendees erupt into a panic, and Neighsay believes the school is under attack. When the students inadvertently make a mess of Friends and Family Day, Neighsay perceives it as an act of aggression, and Twilight apologizes on behalf of her students.

Neighsay is shocked to learn that Twilight has non-ponies among her students, calling the other races "dangerous" and believing they would use Twilight's lessons against Equestria. Thorax, Ember, Prince Rutherford, and Grampa Gruff take extreme offense to Neighsay's insinuations and pull the students they represent out of the school. Because Twilight failed to meet the E.E.A.'s high-reaching standards, Chancellor Neighsay shuts down the School of Friendship and puts a magical lock on its doors.

Twilight Sparkle: This happened while we were gone?
Applejack: Wow, those are all the places we went when we left to save Equestria!
Rarity: Ugh, there's that horrid town where we were almost sold!
Rainbow Dash: The pirates! They were pretty awesome! Uh, once they decided not to throw us overboard.
Pinkie Pie: And Mount Aris! Ooh, Starlight, did you know we made seashell necklaces for allllll [inhales] lllllll the seaponies?
Starlight Glimmer: I— you— really? What about that unicorn, the one who attacked Canterlot?
Twilight Sparkle: Tempest! I invited her to come to Ponyville, but she wanted to spread the word of the Storm King's defeat! And share what she learned about friendship.

Applejack: Y'all think that's why the map grew? Friendship quests beyond Equestria?
Fluttershy: I hope not! I've had quite enough life-threatening adventures, thank you very much.

Pinkie Pie: How many friendship quests do you think we need to go on before we have to expand the throne room?
Twilight Sparkle: We can't do it all alone.
Pinkie Pie: Sure we can! We just need to knock this wall down, get some paint...

Rainbow Dash: It's too much. Too much!
Rarity: Ugh, you think so? I had hoped dressing the part would make me feel the part!
Rainbow Dash: Not your dress! This! Us! Teaching?! They're gonna think I'm an egghead!

Twilight Sparkle: The EEA is very clear about how schools should be run. We have a huge responsibility, and I need you all to do this by the book. That means no cannons in class, Pinkie.
Pinkie Pie: Aww, not even a teeny cannon?
[tiny party cannon fires]

Pinkie Pie: [screams] First day at school! So many new ponies!
Twilight Sparkle: About that, one thing I forgot to mention. It's not just ponies!
[students chattering]
Pinkie Pie: That was unexpected.

Sandbar: Whoa, sorry! I'm Sandbar! Are you a student here too?
Gallus: [sarcastically] No, I thought I'd just randomly stand here and see how many ponies would walk into me. [blows feather]

Silverstream: Is this what boring is? Am I bored?

Smolder: Oof! Is there anything in Yakyakistan that isn't the best?
Yona: Yes! Wait. No! Yaks best.

Gallus: Aw, are we not being sweet and friendly enough for you, pony?
Silverstream: That was sarcasm, right? 'Cause you weren't being sweet or nice?

Twilight Sparkle: I get it, things are getting off to a rougher start than expected. But that's okay!
Spike: Who are you and what have you done with Twilight Sparkle?

Fluttershy: Oh my! What are you all doing? Aren't classes that way?
Ocellus:: Ah— [clears throat] A generosity field trip, daaaaarling. [giggles] I'm taking the students to the lake to look at our divine reflections.

Smolder: I take back everything I said about you! That was cool!
Ocellus: Thanks! Wait, what did you say about me?

Gallus: And that's why griffons breathe fire when we get mad.
Silverstream: They do not! Wait! Do they? No! Really?
Yona: Griffons just full of hot air! 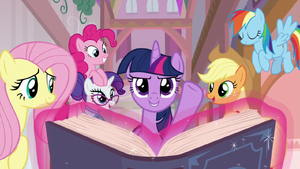