School Daze - Part 2 is the second episode of season eight of My Little Pony Friendship is Magic and the one hundred and seventy-first overall. It is the second part of a two-part season premiere.

In this second part, Twilight Sparkle and her students try to save the School of Friendship from being shut down by the Equestria Educational Association.

Animatics of the episode were broadcast during Discovery Family's Pony Palooza marathon from March 17-24, 2018.

Following the closure and discrediting of her School of Friendship, Twilight Sparkle falls into a depression and refuses to get out of bed. After upsetting her friends and making enemies out of Equestria's allies, she feels like a failure as the Princess of Friendship. Her friends enter to try and cheer her up, but Twilight says she needs time to be alone and think.

Outside the closed-down school, Starlight Glimmer appears before Twilight, but instead of trying to cheer her up, she tells Twilight what she did wrong. Starlight tells Twilight she gave up too easily and should stand up for what she believes in, regardless of what anyone says. Twilight is unsure about going against Chancellor Neighsay and the E.E.A.'s rules, but Starlight says, as the Princess of Friendship, she should write her own rules.

Taking Starlight's words to heart, Twilight meets with the rest of her friends in the castle throne room and declares she is reopening the school. After the lack of success in their lessons, the ponies are nervous about trying again, but Twilight allows them to teach their own way this time instead of the E.E.A's way. While Twilight deals with the school's discrediting, her friends go to get their students back.

At Yakyakistan, the Dragon Lands, the Changeling Kingdom, Mount Aris, and Griffonstone, the Mane Six attempt to make peace with the creature representatives that Neighsay offended in the previous episode and ask to enroll Yona, Smolder, Ocellus, Silverstream, and Gallus at the school again. Unfortunately...

Where did the students go?

With the students missing, the leaders of the different races of Equestria gather at Canterlot Castle. According to Seaspray, the students left notes saying they didn't want to say goodbye after the school was closed and ran away to stay together. Believing someone helped them accomplished this, the leaders all start accusing each other of hiding the students. Princess Celestia tells Twilight to find the students quickly before war breaks out between all the races.

Back at Sugarcube Corner, the Mane Six, Starlight, and Spike try to figure out where the students have gone. Sandbar enters to buy a large quantity of cupcakes from Pinkie Pie. Upon realizing the ponies are looking for his friends, he immediately gets nervous. Applejack and Rarity recall Sandbar picking up a large amount of apples and pillows earlier that day and deduce they'll find the other students if they follow him.

Hiding out at the castle

Gallus, Smolder, Ocellus, Yona, and Silverstream hide from their teachers and leaders at the Castle of the Two Sisters. When Sandbar returns with the supplies he picked up in Ponyville, the six friends eat cupcakes together and have a pillow fight. However, their food draws the attention of a small porcupine creature called a puckwudgie.

Ocellus transforms into a puckwudgie herself to try and befriend it, but the creature turns feral and calls other puckwudgies to its side. When Yona attacks them, they shoot their quills at the six friends, forcing them to take cover. Before the puckwudgies can attack again, the six friends are rescued by the Mane Six, who round up the little creatures and send them flying with Pinkie's party cannon.

The six students are impressed by their teachers' skills, and the Mane Six are relieved to see their students unharmed. Now that they have been found, Ocellus fears their teachers are going to send them back home, but Twilight has another idea. Impressed that the students have already learned about friendship outside of their school lessons, Twilight asks them to return to the School of Friendship. The students agree under the assurance that their lessons won't be as boring as last time.

The Mane Six and their students return to the school in time for the arrival of Princess Celestia and the race leaders. The students decide to stay at the school, much to the surprise of their leaders, and Twilight uses her magic to break Chancellor Neighsay's seal on the doors. When Neighsay appears to investigate the broken seal, Twilight and her friends tell him to step aside so they can resume classes. Neighsay angrily refuses to allow the school to be reopened, insisting that its closing was for the greater good.

Twilight declares that even though the School of Friendship is not E.E.A.-accredited, it is an independent institution with its own set of rules that do not need the E.E.A.'s approval. Neighsay insists that changing the rules for such a diverse group of students will not work, but Celestia says the same thing was once thought about Earth ponies, unicorns, and Pegasi. With the belief that Twilight's school could one day destroy Equestria, Neighsay leaves in a rage.

With the School of Friendship officially reopened, Twilight and her friends sing the song Friendship Always Wins, ending with a group shot of the Mane Six and their students. In the end, Ember, Rutherford, and the other leaders allow the students to remain at the school. Grampa Gruff refuses at first, but after enough of Gallus' begging, he relents. As Celestia and the other leaders leave, Twilight and her friends head inside the school to begin their lessons.

Spike: Ugh. Look on the bright side - sure, the EEA closed your Friendship School, but now you've got time to do other stuff! It's like being on vacation!
[flumph]
Spike: Whoa!
Twilight Sparkle: A failure vacation! I'm supposed to be the Princess of Friendship, and all I did was make enemies with Equestria's allies, upset my friends, and get my school... unaccredited! There is no bright side! [blows nose]

Pinkie Pie: [stage whisper, to Spike] You didn't tell me this was a pity party! I would've brought ice cream!

Twilight Sparkle: Guess what? The School of Friendship is back in business!
Rainbow Dash: What?!
Rarity: But why?
Fluttershy: Oh no.
Applejack: Bad idea.
Pinkie Pie: Do we still get to guess?

Thorax: The Changeling Empire can't afford an international incident. If any creature blames the Changelings for this—
Ember: What are you up to, shapeshifter?
Thorax: ...but we're friends!

Pinkie Pie: Maybe they were attacked by a ferocious shrimp! Nopony ever expects that!
Fluttershy: [gasps] Shrimps can attack?
Pinkie Pie: Nope! That's why nopony expects it.

Rarity: We need to think like our students. If someone told us we would never see each other again, what would we do?
Pinkie Pie: Go someplace we could all hang out and eat lots and lots of cupcakes! [beat] What?

Silverstream: You guys! I just found stairs!
[beat]
Gallus: Aaaand we care because...?
Silverstream: Stairs are awesome! We don't have anything like 'em underwater 'cause you know, [magic zap] no way to climb 'em!
Rest of students: Ohhhh.

Gallus: Is that Professor Egghead?!

Yona: Not bad! [quickly] For pony.

Princess Celestia: Hold on, please! I'm sure Princess Twilight Sparkle has a good explanation for all of this.
Twilight Sparkle: I do! It's true that my School of Friendship is EEA unaccredited...
Spike: Look! She said it without doing the eye thing!
Chancellor Neighsay: Then it is not a school!
Twilight Sparkle: It's not an EEA school. It's a friendship school, with its own rules. I should know; I wrote the book.

Ember: Urgh, fine! If you promise to stop singing, Smolder can stay!

Seaspray: You belong here. Now, can you show me those 'stair' things you mentioned?
Silverstream: [incoherent excited noises]

Grampa Gruff: [to Gallus] What? You belong at home! You think I care if you've made friends?
Gallus: Please, Grandpa Gruff? [puppy-dog eyes]
Grampa Gruff: Alright, alright! Stop doing that! 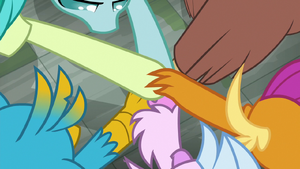