At Canterlot Castle, Celestia and Luna explain that multiple reports are emerging about ponies' magic suddenly failing, and Princess Cadance reports on similar incidents in the Crystal Empire. A messenger pony delivers a letter from Star Swirl the Bearded, in which Star Swirl says that magic is disappearing from Equestria and estimated to be completely gone in three days. Twilight and her friends volunteer to go to Tartarus to see if Tirek has escaped or masterminded the crisis from behind bars. 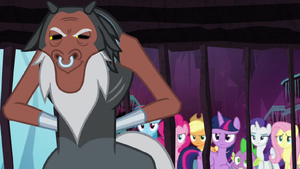