School Raze - Part 2 is the twenty-sixth episode of season eight of My Little Pony Friendship is Magic and the one hundred and ninety-fifth overall. It is the second part of a two-part season finale. The title is a parody of the eighth season premiere School Daze.

In this second part, the Mane Six try to escape from Tartarus while Cozy Glow furthers her plot to take over the School of Friendship, with only the Young Six and the Cutie Mark Crusaders to stop her.

Royal guards.[1][2]​[​specify​]​ When asked why no bat pony guards appeared, Jim Miller responded: "Because they weren't in the script."[3]

A small part with Pinkie annoying Tirek with her monkey costume reappears in Cakes for the Memories.

The truth about Cozy Glow

The Mane Six are horrified to learn that Cozy Glow is the one behind Equestria's disappearing magic. Lord Tirek states that even though he hates ponies, he was willing to work together with one in order to drain Equestria's magic and trap the Mane Six inside Tartarus. Twilight Sparkle worries about the School of Friendship and its students, but Applejack is certain that Starlight Glimmer can foil Cozy's schemes.

With the magic of Equestria drained, the Mane Six are unable to open the gates of Tartarus and escape. But Twilight comes up with the idea of harnessing the natural magic inside the various creatures locked up in Tartarus' cages.

A school under siege

Back at the school, Cozy Glow enters the office of "Headstallion" Neighsay and expresses how relieved she is that he's there to take charge during Equestria's magic crisis. When she brings up Neighsay's duties as the head of the E.E.A., Neighsay says that protecting the school from threats to Equestria is more important than said duties. Promising that the school will be run in accordance with the E.E.A.'s much stricter guidelines, Neighsay dismisses Cozy Glow from the office, and Cozy indignantly walks away.

Meanwhile, in the catacombs under the school, Sandbar and the Cutie Mark Crusaders try to free Starlight Glimmer from her magic confinement, but whenever they get close, the magic tries to ensnare them as well. With Twilight and her friends trapped in Tartarus and Princess Celestia out of reach in Canterlot, the Crusaders wonder who they can turn to for help, and Sandbar gets an idea.

In the school dorms, Gallus keeps trying to break out of the locked room, and the rest of the Young Six are still upset over Sandbar's perceived betrayal. Just then, Sandbar appears at the window to let them out, and Yona is thrilled that he didn't truly betray them. After he and the Crusaders explain the situation, Sandbar suggests turning to Chancellor Neighsay for help, believing he will assist them if they explain what's going on.

Chancellor Neighsay addresses the school students and declares that Twilight's administration is over and that the school will be shifting over to E.E.A. guidelines. Cozy Glow commends Neighsay for his inspiring speech but points out to the students that there won't be any more lessons taught by Twilight and her friends, causing the students to worry. When Cozy mentions that Celestia and Luna supported Twilight's school and that Neighsay once tried to close it, she incites a full-blown student uprising against Neighsay.

The students tie Neighsay up in chains in Twilight's office, and Cozy Glow disposes of his magic medallion. When Neighsay asks Cozy why she's doing this, she explains that because friendship is the most powerful force in the world, she wants to take over the school and harness the friendship of its students to become the most powerful pony in Equestria. As Cozy Glow exits the office, the Cutie Mark Crusaders appear before her to serve as a diversion. They congratulate her on becoming the school's new headmare and ask if they can help in any way. Cozy explains that she needs help cleaning the school, but upon leading the Crusaders to a supply closet, she locks them inside, fully aware that they were just distracting her.

While the Crusaders keep Cozy Glow occupied, the Young Six sneak into Twilight's office and find Neighsay chained up and trying to retrieve his medallion. Neighsay believes the six have come to gloat, but they release him from his chains and reveal Cozy Glow's true nature and plans to him. With this knowledge, Neighsay uses the remaining magic in his medallion to open a portal to Canterlot so he can inform the princesses.

Back in Tartarus, Twilight enacts a plan to channel the magic of its imprisoned creatures to open a way out. Tirek boasts that her plan is futile because every ounce of Equestrian magic will be gone by sunset. Twilight points out, however, that once the magic is gone, Tirek will be trapped forever with the ponies he hates as his permanent company. Applejack, Rainbow Dash, and Rarity tire out Cerberus, Fluttershy convinces the other creatures to donate their magic for Twilight's plan, and Pinkie Pie convinces Tirek to help as well by tormenting him with her hyperactive personality.

The creatures and Tirek give their magic to Twilight, and Twilight uses their combined magic to open the gates of Tartarus. Twilight and her friends escape through the doors just before they close again. Unfortunately, the sun has already gone down by this time, meaning all the magic of Equestria is now gone for good.

Fluttershy: What does that mean?
Twilight Sparkle: It means... we've failed!

Battle for the school

Sandbar leads his friends back into the catacombs under the school, where Starlight Glimmer is still trapped with the collected magic of Equestria. Ocellus deduces that Cozy Glow has linked the six artifacts from A Matter of Principals together to drain magic from Equestria like a magnet and that removing the artifacts from the circuit should deactivate it. She warns, however, that feedback from the deactivation could destroy the school entirely. Upon hearing this, Cozy Glow appears with the rest of the students and convinces them that the Young Six are trying to destroy Twilight's school as Neighsay forewarned.

The Young Six try to convince the other students that Cozy is manipulating them, but Cozy has completely persuaded them to her side, even leading them to believe the Young Six sent Twilight and the others to Tartarus and captured Starlight Glimmer. The students attack the Young Six, and as they try to fight back, Gallus gets caught in the magic sphere with Starlight, and his friends get caught as well while trying to save him. A vortex in the ground suddenly opens up and starts to transport them and Equestria's magic to another location.

Cozy Glow starts to lead the students away, but the chamber suddenly lights up with the magic of the Tree of Harmony, ignited by the Young Six's friendship and loyalty in one another. As their bodies glow in a manner similar to the Elements of Harmony, the Young Six grab the artifacts and shut off the magic-draining spell, causing all the magic of Equestria to be released and returned to its rightful owners. With her magic restored, Twilight is able to teleport herself and her friends back to the school.

Starlight teleports herself and the Young Six to safety, and Cozy Glow angrily curses the Young Six for ruining her plans. When the Mane Six appear to confront Cozy Glow for deceiving them, she tries desperately to save face, but the ponies tell her that Tirek told them everything. Twilight, disagreeing with Cozy's views about friendship, explains that friendship is indeed powerful, but power isn't the sole purpose of friendship.

Twilight regrets not being able to teach this to Cozy, but the Young Six argue that they wouldn't have been able to defeat Cozy without Twilight's teachings. Cozy Glow callously dismisses the values of friendship and tries to escape so that she can try her plan again somewhere else, but she is stopped by the other students, the princesses, Chancellor Neighsay, and the royal guards.

Some time later, Neighsay admits to Twilight that she truly is the only one capable of running the School of Friendship. The Young Six appear in graduation gowns, believing saving Equestria from Cozy Glow qualifies them to graduate from school. However, Twilight tells them learning everything about friendship takes more than one semester, much to their disappointment. Neighsay also admits how wrong he was about non-ponies being incapable of learning about friendship.

"If it were easy to learn, we wouldn't need a school."
— Twilight Sparkle

The Cutie Mark Crusaders finally break out of the closet that Cozy Glow locked them inside, and Twilight and Celestia assure them that Cozy Glow is somewhere where she can't cause any more trouble. Meanwhile, Princess Luna and the royal guards escort Cozy Glow into Tartarus and lock her up in a cage next to Tirek's. The finale ends with Cozy Glow greeting her fellow inmate and ominously asking if he wants to be her friend as she gives off a sinister smile.

Twilight Sparkle: Cozy Glow is behind all of this?!
Lord Tirek: [laughs] I'm not usually a fan of ponies, but draining your precious world of magic so she could trap the six of you was inspiring! [laughs, coughs]
Spike: Um, there's seven of us.

Ocellus: If Sandbar's turned his back on us, every other pony probably has, too.
Yona: Sandbar not turn his back! Sandbar is our friend!
Smolder: Uh, did you miss the part where he said he didn't want anything to do with us?
Silverstream: Maybe he just said that so one of us could be free to snoop around and figure out what's going on.
[lock unlatches]
Sandbar: I dunno. That sounds too clever for a pony to come up with.

Chancellor Neighsay: The reign of Princess Twilight is over!

Cozy Glow: Are we going to give the pony who already tried to wreck Twilight's school once another chance to do it?

Cozy Glow: If there's one thing I've learned here, it's that friendship is the most powerful thing there is. And as headmare of the School of Friendship, nopony will have more friends than me! Making me the most powerful pony in Equestria!

Pinkie Pie: I can do this all eternity.
Lord Tirek: Fine! I'll help you leave! Just please stop!

Cozy Glow: [to Cutie Mark Crusaders] Do you three think you can fool me?! I know a diversion when I see it!

Gallus: This is just like chapter twelve in "Ked Facca's Facts and Artifacts" from Twilight's class!
[beat]
Gallus: What? I've been studying. Finals are coming up, you know?

Twilight Sparkle: Saving Equestria is nice, but I'm afraid it'll take more than one semester to learn all there is to know about friendship.
Spike: [belches] Told ya.
Young Six: Awwww... 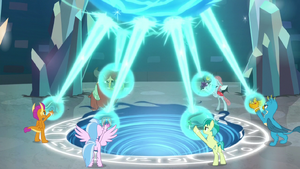