For the song featured in School Daze - Part 1, see School of Friendship (song).

The School of Friendship was previewed in a 2018 "MY LITTLE PONY SERIES" image within Hasbro 2017 Investor Day webcast presentations from August 3, 2017.[3][4]

The school makes its debut in the two-part season eight premiere School Daze. It is located adjacent to the Castle of Friendship. After receiving provisional approval from Chancellor Neighsay and the Equestria Education Association to open the school, Twilight Sparkle appoints her friends as its faculty, and Sandbar, Gallus, Yona, Smolder, Ocellus, and Silverstream are among the students who enroll.

At the end of Part 1, Neighsay shuts the school down, having been led to believe only ponies would be allowed to enroll, and not agreeing with the decision to allow other creatures to attend. With encouragement from her friends, Twilight reopens the school in Part 2 as an independent institution outside the EEA's purview.

Beginning with The Maud Couple, the school is prominently featured in the series' theme song, replacing most of Ponyville.

The school makes minor appearances in Fake It 'Til You Make It, where Rarity asks Twilight Sparkle and Starlight Glimmer if they could run the Rarity For You boutique in Manehattan. Later, Smoky, Softpad, and Smoky Jr. approach Spike and Twilight in the latter's office to tell them about Fluttershy's personality changes.

In Grannies Gone Wild, Rainbow Dash briefly tells the students about what the Wonderbolts told her about the Wild Blue Yonder rollercoaster ride in Las Pegasus.

In Horse Play, Twilight holds a play at the school to celebrate Princess Celestia's "ones-versary," and Celestia briefly takes acting lessons at the school.

In Non-Compete Clause, Fluttershy is voted by the students as the school's most popular teacher. Following a field trip, the students later vote for Rainbow Dash and Applejack to be the school's next Teacher of the Month.

In Molt Down, Spike accidentally takes over a tour for Pinkie Pie, showing a group around the school.

In Marks for Effort, the Cutie Mark Crusaders attempt to get themselves enrolled in the school, but are refused, due to already knowing all about friendship. They then tutor a struggling student, Cozy Glow, who intentionally fails a test to try and make it look like the Crusaders need to attend the school. This backfires, as Twilight believes the Crusaders intentionally set up Cozy to fail. Cozy confesses the truth to guidance counselor Starlight, and the Crusaders are given honorary diplomas, and an offer to become official friendship tutors for the school.

The school is briefly seen at the beginning of The Mean 6 when a photographer (actually Queen Chrysalis in disguise) arrives to take pictures of Twilight and her friends.

In A Matter of Principals, Twilight organizes a scavenger hunt for the students before she and her friends are called away on a friendship mission. In their absence, Starlight Glimmer serves as interim headmare. Discord hires Iron Will, Cranky Doodle Donkey, and an inanimate dragonsneeze tree to serve as temporary substitute teachers and inconvenience Starlight, and Starlight hires Spitfire, Trixie, and Maud Pie to serve as substitutes.

In The End in Friend, Rarity and Rainbow Dash are used as an example when Twilight teaches her students about the power of compromise.

In Road to Friendship, the school is briefly seen when Trixie invites Starlight to join her on a tour of Saddle Arabia.

In A Rockhoof and a Hard Place, Rockhoof briefly becomes a teacher at the school. While he quickly becomes a hit with the students, he accidentally causes a lot of damage while telling his stories.

In What Lies Beneath, Twilight has her students prepare for a test on Equestrian friendship history. As they study, Sandbar, Gallus, Yona, Smolder, Ocellus and Silverstream discover a cavern beneath the school, where they meet and are tested by a representation of the Tree of Harmony.

The school briefly appears in Sounds of Silence and Father Knows Beast.

In School Raze, Twilight once again places Starlight in charge of the school while she and her friends investigate the disappearance of magic in Equestria. In their absence, Cozy Glow plots to seize control of the school by trapping Starlight within the same spell she uses to drain the magic from Equestria and undermining Chancellor Neighsay's attempt to make the school pony-exclusive. With the help of the Tree of Harmony, Sandbar, Gallus, Silverstream, Smolder, Ocellus, and Yona foil Cozy's plans.

The school is briefly seen in the background during My Little Pony Best Gift Ever, having been closed for the holidays.

The school is briefly referred to in the special My Little Pony: Rainbow Roadtrip, with Twilight planning to bring some tests along on the trip so she can grade them.

The School appears in The Beginning of the End - Part 1, still closed. Twilight reveals that she plans to make Starlight the new headmare after she becomes the new ruler of Equestria.

In Uprooted, Twilight and Spike are preparing the school for the new semester when Sandbar, Gallus, Yona, Smolder, Ocellus and Silverstream arrive, having received a summons from the Tree of Harmony.

The school is briefly seen at the beginning of both Sparkle's Seven and The Point of No Return.

In She's All Yak, the school hosts the Amity Ball, an updated version of Ponyville's Fetlock Fete.

The school is briefly seen at the beginning of Sweet and Smoky, and mentioned in Going to Seed.

The school is shown in the first half of Student Counsel, with many students going to Starlight Glimmer for guidance counselling before the school is closed for spring break. When Silverstream goes missing, Starlight and Terramar search around the school for her.

In The Last Crusade, Scootaloo mentions her and her friends' work at the school to her parents.

In 2, 4, 6, Greaaat, the school forms its own buckball team to compete in a match against a team from Celestia's School for Gifted Unicorns. A cheer squad is also formed by Twilight, consisting of Ocellus, Smolder, Yona, Shimmy Shake and Lighthoof, and coached by an initially unenthusiastic Rainbow Dash. While the cheer squad performs a memorable routine, the school loses the match by one point.

In A Horse Shoe-In, Starlight is officially made the school's new headmare, and sets out to hire a vice-headmare to help her, putting applicants through a series of trials. The process is hindered by Trixie, who is convinced Starlight is going to give her the position either way. After Trixie endangers the studies by teleporting part of Froggy Bottom Bogg into a classroom, she realizes she is not the best candidate, but figures out who is: Sunburst, who gladly accepts the position. Starlight then assigns Trixie as the new guidance counselor.

In The Ending of the End - Part 1, Starlight and Trixie evacuate the school's students through the caverns below just before Queen Chrysalis arrives seeking revenge on Starlight. In The Last Problem, the school is seen in the future, now with many more non-pony students in attendance, with Silverstream, Smolder and Ocellus as part of the staff, and the Cutie Mark Crusaders as teachers.

The school is briefly mentioned in My Little Pony: Friendship is Magic Issue #66. It appears in Issue #71 as Sandbar, Gallus, Yona, Smolder, Ocellus and Silverstream prepare for Nightmare Night. It is briefly seen in Issue #73 when Twilight and her friends discuss Fluttershy's recent strange behavior and in Issue #74 when Fluttershy is preparing for a class.

The school also features in the second story of the My Little Pony Holiday Special 2019, "Krumple Horn", featuring the Young Six as they prepare for the end of the school's current semester and the holidays.

In My Little Pony: Generations, when the school is overflowing with new students, Starlight addresses this by hiring new teachers Violet Shiver, Black Belle, and Shadow Storm, unaware that they are artificial ponies created by the evil witches Grackle and Dyre. The new teachers teach meanspirited lessons to the students, causing trouble throughout the school. Over time, however, the artificial ponies come to enjoy their roles as teachers and cherish their students. In the end, they become real ponies after Grackle and Dyre's destructive Smooze is destroyed, and they stay on as teachers at the school.

In the adaptation Meet the New Class, "Princess Twilight Sparkle is opening a School of Friendship!"[5][6]

In the chapter book Beyond Equestria: Fluttershy Balances the Scales, Twilight starts to share the idea of the school, but is interrupted by the arrival of a messenger from Princess Skystar.

In Triple Pony Dare Ya, the inside of the school is seen during Applejack and Rainbow Dash's dare contest, most notably the two's own classrooms.

In Mystery Voice, Rarity's classroom is shown as she tries to teach the Young Six how to make traditional Hearth's Warming dolls. She keeps getting interrupted by someone speaking over the school's PA system in various voices, who later is revealed to be Applejack. Applejack then tells the students the story of the first Hearth's Warming, using different voices for each character.

The school is the focus of Teacher of the Month, with flashbacks to the many times Fluttershy's teaching methods earned her the titular award. In Starlight the Hypnotist, Starlight's office is shown, and many areas of the school are seen in flashbacks. 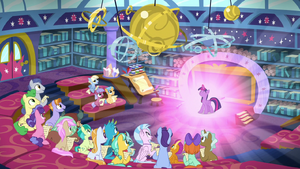