Scorpan is a male gargoyle prince and Lord Tirek's younger brother who appears in the IDW comics and is alluded to in the season four finale, My Little Pony Best Gift Ever, and A Trivial Pursuit.

Scorpan shares his name and design with a Generation 1 villain from the animated television special Rescue at Midnight Castle. He is a brown, gargoylish creature with a humanoid-like body, dark brown mane, bat-like wings, and a thin, tasselled tail. While he is depicted as Lord Tirek's brother in the series, his G1 counterpart is a human prince who was cursed by and reluctantly serves Tirac, and he was a friend of Spike's G1 counterpart.

Scorpan is first mentioned in Twilight's Kingdom - Part 1 in a legend told by Princess Celestia and Princess Luna to Twilight Sparkle and Princess Cadance. In the legend, he and his brother Lord Tirek travel from "a distant land" with the intent of stealing Equestrian magic. However, Scorpan comes to appreciate the ponies' ways and befriends Star Swirl the Bearded. When Tirek remains resolute in their plan despite Scorpan's urges to reconsider, Scorpan alerts the princesses of his brother's intentions, resulting in Tirek's imprisonment in Tartarus. Afterward, Scorpan returns to his homeland.

Tirek mentions Scorpan multiple times throughout the episode and Twilight's Kingdom - Part 2, contemptuous of his "weak-minded" brother's betrayal, and likening Discord's friendship with the ponies as "the same trap that claimed [Scorpan]". In a gesture of false gratitude and loyalty, Tirek gives Discord a medallion he claims to have received from "someone very close to [him]"; he later admits that it originally belonged to Scorpan and actually considers the medallion "as worthless as he is."

Scorpan's medallion later proves to be Twilight Sparkle's key for the Tree of Harmony's chest when Discord gives it to her in a more sincere gesture of friendship. This final key opens the chest and grants Twilight and her friends the power to defeat Tirek and seal him in Tartarus once again. Both the keys and the chest later leave the tree and go to Ponyville, where they create the foundation for Twilight's castle.

In the holiday special My Little Pony Best Gift Ever, Scorpan is mentioned in Discord's line, "Oh, for Scorpan's sake!"

Scorpan is mentioned by Twilight and Mudbriar in A Trivial Pursuit with him and Tirek being the answer to the question of who came to Equestria to steal magic from pony inhabitants. Discord's mention of Scorpan from Best Gift Ever reappears in Memnagerie.

Scorpan appears in Tirek's origin story in My Little Pony: FIENDship is Magic Issue #2. Since a young age, Scorpan has been kindhearted and soft-spoken, and he would frequently follow Tirek on his journeys outside their castle home. Despite Tirek's certainty of Scorpan's loyalty to him, Scorpan displays far more loyalty to their parents, and he disapproved of Tirek disobeying their parents' wishes and telling them lies.

Prince Scorpan is a character in Gameloft’s mobile game, and acts as a boss battle helper in the “Tale of Tirek” event. His bio states, "Tirek's mild-mannered brother would one day escape from his elder sibling's lengthening shadow...and save Equestria in the bargain."

My Little Pony: The Manga

Scorpan's G1 counterpart appears in Vol. 3, in which Twilight takes part in an altered version of the events of Rescue at Midnight Castle.

"But Tirek, you know what father said about visiting the Nether Lands. And mother will be summoning us for supper soon and—"
— My Little Pony: FIENDship is Magic Issue #2

"We must get back immediately or they'll notice we're gone."
— My Little Pony: FIENDship is Magic Issue #2

"Brother, you're here! I thought for certain you were out in the Nether Lands."
— My Little Pony: FIENDship is Magic Issue #2

"Father must be very upset to summon us this early."
— My Little Pony: FIENDship is Magic Issue #2

Scorpan with his brother, ready to conquer.

Scorpan trying to convince his brother into foregoing their plans. 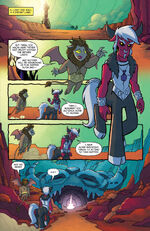 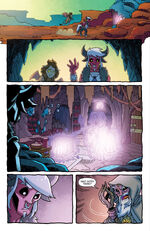 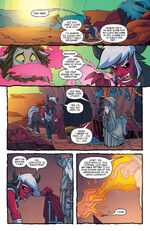 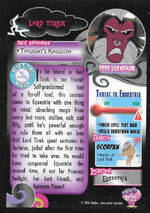 A concept design for Scorpan from the scrapped movie prologue.