Screwball is a female Earth pony with a pink coat, violet mane and tail with white highlights, dark violet eyes with pink swirls, and a cutie mark of a screw and a baseball. She is unnamed in the show, but she is named in merchandise.

Screwball's mane and tail move in a billowing smoke-like manner. Her color scheme is similar to that of "Abradacanter". Her eyes contain swirls in the irises instead of pupils. She wears a propeller beanie similar to Button Mash. Her cutie mark's screw is the partial basis of one of Soarin's cutie marks.[1][2][3]

In a Facebook Live session on September 27, 2017, Rebecca Dart revealed that Screwball was the first pony she designed for the series.[4]

In The Return of Harmony Part 2, Screwball floats past Twilight Sparkle as she unhappily wanders through Ponyville. She briefly appears in The Cutie Re-Mark - Part 2 in an alternate timeline ruled by Discord.

On My Little Pony: Friends Forever Issue #9 page 3, Screwball appears in a long line at Apple Con 45 between Photo Finish and Lotus Blossom. On My Little Pony: Friendship is Magic Issue #30 page 16, she participates in a conflict between Apple family supporters and Stinkin' Rich supporters, throwing a pie at another pony. In Issue #75, an infant version of her appears on page 3.

In the Absolute Discord expansion set of Enterplay's collectible card game, Screwball appears on the game's packaging and official playmat. She is named with a trademark symbol on cards #Pƒ5 and #38 R, each of which lists the quote "I'M HELPING!" in upside-down and right-side-up text. 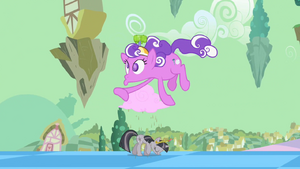