Screwy is a female background Earth pony with a light blue coat, bluish gray mane and tail, cerise eyes, and a cutie mark usually of a screw and once of three baby bottles. She is unnamed in the show, but she is named in merchandise. Her dialogue consists entirely of dog noises.

Screwy shares her design, eye color, and sometimes cutie mark with S04E20 Unnamed Earth Mare #4, and she has a similar color scheme to Shoeshine, S01E14 Unnamed Unicorn Mare #3, and "Bloo".

Screwy's debut in Read It and Weep was not part of the episode's script; both this first appearance and her appearance in Just for Sidekicks were added by storyboard artist[1] Raven Molisee.[2]

Screwy first appears in the season two episode Read It and Weep. She chases after Rainbow Dash from Ponyville Hospital alongside Doctor Horse, "Nurse Tenderheart", and Night Watch, barking and growling like a dog throughout the scene.

In the season three episode Just for Sidekicks, she is briefly seen interacting with Nurse Snowheart. She also appears on the Friendship Express train to the Crystal Empire in Games Ponies Play.

In season four, Screwy appears in Leap of Faith in line to buy Flim and Flam's miracle curative tonic. During the scene in which Applejack reveals the tonic to be a fake, Screwy's cutie mark is different. She is also seen in a flashback to this scene in Twilight's Kingdom - Part 1.

Screwy makes a background appearance at Ponyville General in Where the Apple Lies, in which she is seen with one of her hooves bandaged and in a crutch, like sometimes in Leap of Faith.

Screwy appears on the Season 2 character poster, as well as the T-shirt front and iPhone case by WeLoveFine and DVD set packaging that depict the same.

She is named on her Enterplay collectible card game card α #202 UR, which lists the quote "Woof! Bow wow! ARF!", and her Equestrian Odysseys expansion set card #91 R, which gives her the description "Screwy is one of the few ponies in Equestria who can speak with animals like Fluttershy. She has a connection with critters that most ponies will never understand."

She is also shown on the WeLoveFine T-shirt "On a Roll". 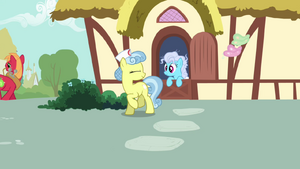