Sea Swirl is a female unicorn pony with a lilac coat, iris mane and tail with a light glaucous streak, raspberry rose eyes, and a cutie mark of two encircling dolphins; one light glaucous and one iris. Her name has not been used on the show, but she is named in merchandise and other media. She shares her design with Minuette and Peachy Pitt. Sea Swirl mouths the word "muffins" along with other ponies in Applebuck Season and has speaking roles in The Cutie Pox and Buckball Season.

Sea Swirl is commonly featured as a background pony.

She makes her first appearance in Friendship is Magic, part 1 at the surprise party that Pinkie Pie throws for Twilight Sparkle in the Ponyville library.

In The Cutie Mark Chronicles, Sea Swirl stands on a cloud in the sidelines of the racetrack in Fluttershy and Rainbow Dash's flashbacks of flight camp, despite not being a Pegasus pony. When this scene is reused in The Cutie Re-Mark - Part 1, Sea Swirl and other wingless ponies are redesigned as Pegasi.

She appears in a bowling alley in The Cutie Pox. She has her first speaking role when she makes an exclamation about "a bowling cutie mark", which a colt earns in the scene. In A Canterlot Wedding - Part 2, she is one of twelve horn-blowing unicorns at the wedding during This Day Aria, Part 1.

In Sweet and Elite, a background pony that shares Sea Swirl's coat, mane, and eye color, and tail design is seen as a part of Fancy Pants' entourage of noble ponies at the Wonderbolts Derby and again at the Canterlot garden party.

Sea Swirl flees from a swarm of twittermites in Bloom & Gloom, attends the Grand Galloping Gala in Make New Friends but Keep Discord, appears at the Ponyville bowling alley and Cranky Doodle Donkey and Matilda's wedding in Slice of Life, and watches a polo game in Princess Spike. She also appears in Party Pooped, Amending Fences, Do Princesses Dream of Magic Sheep?, Canterlot Boutique, Rarity Investigates!, Made in Manehattan, Brotherhooves Social, Scare Master, and The Mane Attraction. She also appears, somewhat obscured, in the final group shot during Friends Are Always There For You in The Cutie Re-Mark - Part 2.

Sea Swirl appears in On Your Marks, No Second Prances, Newbie Dash, A Hearth's Warming Tail, Flutter Brutter, Spice Up Your Life, The Cart Before the Ponies, Buckball Season, The Fault in Our Cutie Marks, and Where the Apple Lies.

In Celestial Advice, Sea Swirl attends the Equestrian Pink Hearts of Courage award ceremony at the Castle of Friendship. In A Flurry of Emotions, she appears in a toy store running away just before Flurry Heart crashes into a toy display in a shopping cart. In Parental Glideance, she attends a ribbon-cutting ceremony in Canterlot. In Honest Apple, she appears in the audience for the Couture du Future contest fashion show at the Carousel Boutique. In A Royal Problem, she attends another ribbon-cutting ceremony in Canterlot. In The Perfect Pear, she buys a jar of pear jam from Grand Pear at the Ponyville marketplace and later appears walking in the marketplace with Cherry Berry at the end of the day. In Fame and Misfortune, she makes background appearances in Ponyville walking with Lemon Hearts and Sassaflash and later talking to Shoeshine. In Triple Threat, she makes background appearances walking around Ponyville town hall with Sassaflash, appears as a trumpet blower during Ember's arrival, walking around Ponyville with Written Script and attending the Dragon Flame of Friendship ceremony. In It Isn't the Mane Thing About You, she walks by the Ponyville marketplace with Sassaflash and later appears standing outside Mr. Breezy's store. In Marks and Recreation, she and an unnamed unicorn colt gets a flyer from the Cutie Mark Crusaders' Cutie Mark Day Camp table. In Secrets and Pies, she attends Pinkie Pie's pie festival, eating at a table with Noteworthy and looking at Pinkie after her outburst.

Sea Swirl appears in the second establishing shot of Canterlot library reading a book near one of the statues in My Little Pony Equestria Girls: Forgotten Friendship.

In Sundae, Sundae, Sundae, Sea Swirl makes a cameo appearance fanning herself through a window of a building in Ponyville during a hot summer day as Pinkie Pie promotes the Sugarcube Corner Ice Cream Museum, exciting both her and Tenth Doctor who suddenly appears behind her.

Sea Swirl is a character in Gameloft's mobile game. The game's description of her states, "This pony just loves to watch dolphins at play -- if she had her druthers, she’d do it all day!"

Sea Swirl appears in a photograph in The Royal Wedding, in All About Alicorns, and in Nightmare Night.

A mini-figure toy named Sea Swirl was released in January 2012 as part of the third wave of mystery packs. The toy uses the Rarity mold but features Sea Swirl's color scheme—albeit with red-orange eyes instead of rose—and cutie mark. Her name comes from the mystery pack packaging and collector card. According to the European version of the card, Sea Swirl "loves the sea". The U.S. version of the card lists Sea Swirl's name with a trademark symbol and has a longer description reading, "SEA SWIRL loves to go swimming in the ocean!"[1]

A second Sea Swirl mini-figure toy and collector card pair was released in November 2013 as part of the ninth wave of mystery packs, which also lists her name with a trademark symbol.[2][3]

Sea Swirl also appears with her name listed with a trademark symbol in Enterplay's collectible card game, in which she is simultaneously referred to by name and depicted with the same design and eye color as in the show. Her card α #93 R gives her the description "Sea Swirl loves living in Ponyville, but she still takes regular train rides to go swim in the ocean whenever she can take a couple days to herself."

Sea Swirl appears standing next to Noteworthy on page 19 of the upcoming book Winning Style.[4] 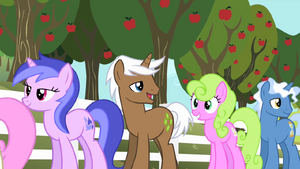